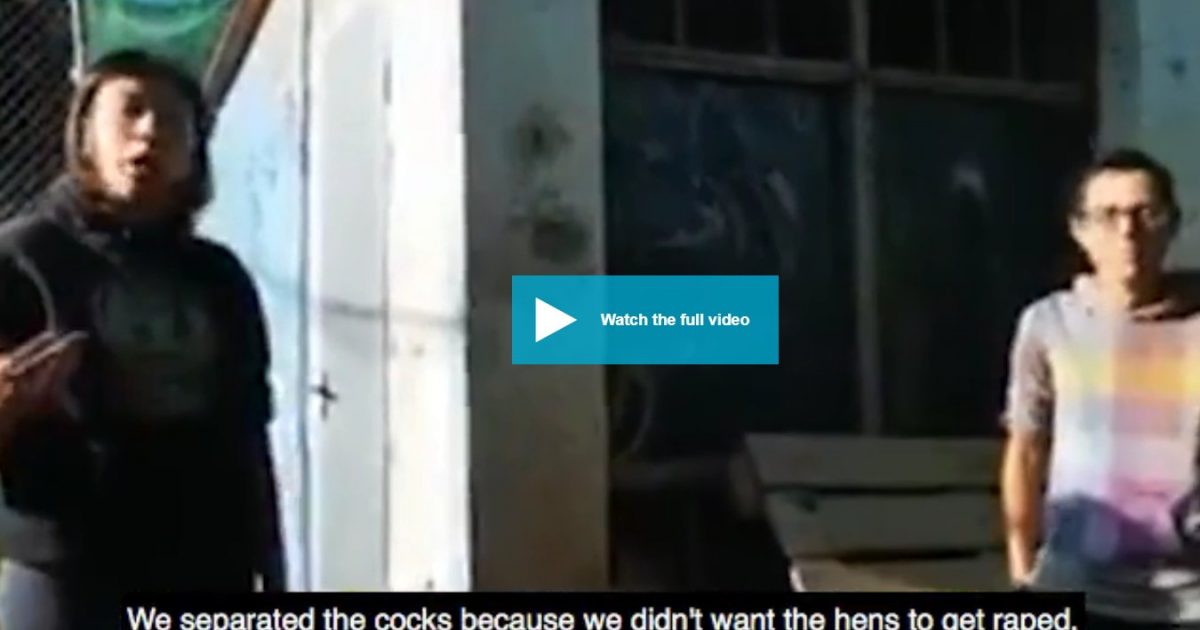 Apparently these vegans are also “anti-speciesist” and “transfeminist,” although I’m not sure what that has to do with anything other than emphasizing how confusing life must be for them. Imagine looking at every species on earth other than humans and going, “OMG, all the females are being raped because they can’t give consent.” Worse yet, if you are “anti-speciesist,” you believe all animals are equal to humans and none is better or worse than the others. In other words, you look up and see birds raping each other, hear a buzz behind you as one fly rapes the other, walk past one dog raping the other, while stepping on ants raping each other on and on until rapey infinity.

This is the moment two vegan activists separate chickens from cockerels because they ‘don’t want the hens to be raped’.

The video was released by the Spanish vegan group Almas Veganas (Vegan Souls), based in Girona in the north-eastern Spanish region of Catalonia.

…In the footage, the two activists can be seen smashing eggs on the ground because ‘they belong to the hens.’

…The vegans then reveal that ‘we separated the cocks because we don’t want the hens to get raped.’

In another video, the activists said that they based their decision on ‘the notion of consent.’

I can’t even imagine how horrible your day to day life must be if you unironically believe this nonsense, but do they really buy it or, like so many other people, are they trolling for attention? In a world where stupidity has become so entrenched that it’s impossible to parody, who knows. They could be trolling. They could also be deeply confused people who don’t know how to “human” correctly.