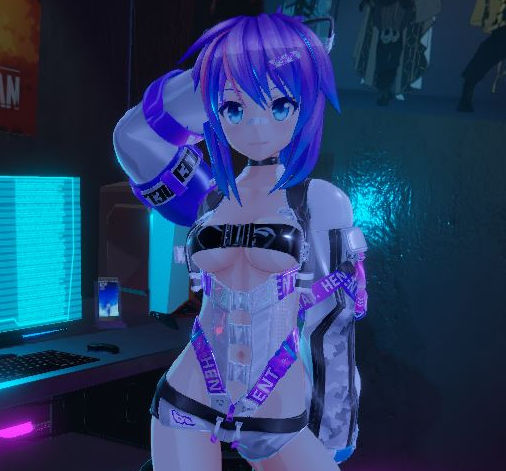 It’s a bad day to be a bad girl because a virtual cam girl is now the hottest thing on the market on “chaturbate,” which is some large cam girl website. Here’s Vice with the scoop:

…In the last three days since her first stream, Melody has gone from 700 Twitter followers to more than 20,000. The “more rooms like this” tab on her Chaturbate page returns an error: “Sorry, we don’t have any rooms similar to projektmelody yet.” That’s because other cam models are human. Her sudden rise in popularity has made some who aren’t working behind a full-body avatar question what place an anime avatar has on the platform.

After taking a look at her Twitter feed and YouTube page, she seems (to me at least) to be modeled on the world’s most famous e-thot, Belle Dellphine. Like Belle, Melody is cutesy-wootsy, anime oriented and teases sex without being overly graphic….and it’s paying off. Not only was she #1 on Chaturbate, but she already has 701 patrons on Patreon chipping in between $1 and $10 each per month. To give you an idea of how fast she’s taking off, when I looked yesterday, that number was in the 400s.

There are two interesting facets to all this. The first is the technology angle. Sex robots are in their infancy and still in the, “Wow, it’s kind of weird that anyone would be willing to pay money for those” stage. The surprising level of excitement over Projekt Melody suggests that once sex robots get advanced enough to give a more realistic performance, there will be a LARGE amount of interest in them.

The other intriguing part of this is human cam girls GETTING ANGRY that they’re being shoved aside by a virtual woman. Here’s one from that VICE article,

Cam model Lennox May has been doing live shows for three years, but has been in the adult industry for the last 10. She watched one of Melody’s recent streams.

“From a technology standpoint I can’t argue that the technology and creation of the character is definitely made by someone with talent,” May told me. But she wonders if something like this belongs on its own designated platform for avatars, separate from the flesh-and-blood models.

“There’s a huge gap in vulnerability, and what that means emotionally for [human] models versus Melody is also quite vast,” May said. “A model has to keep up appearances when they have trolls in their room, or when put in an awkward situation with a customer who is being rude or asking for things that we do not feel comfortable doing.”

I’m not sure what any of that has to do with… well, anything. Now, here are a few more cam hoes on Twitter interacting with their “fans.” 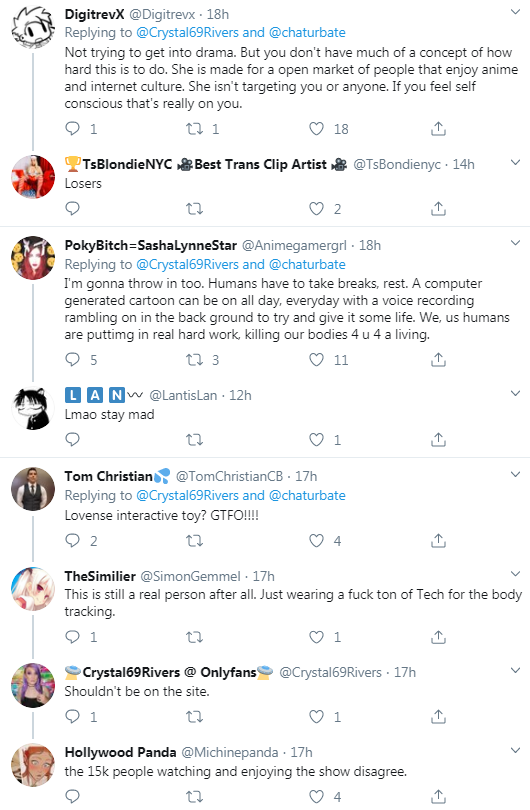 Digital women have some advantages over the real thing. They can be perfectly formed, they have no wants or desires of their own and since they have no feelings and aren’t real, there’s no shame, guilt or embarrassment in using them beyond the whole, “How did I get so low that I am doing this instead of a getting a girlfriend,” thing.

E-Thots are real, but they can’t be as physically perfect as a virtual girl. Moreover, the guy paying money at an e-thot knows she doesn’t care about him. She’s willing to do things for money. Nothing more, nothing less. In fact, if he walked up to her and asked her out, not only would she probably laugh in his face, but the fact that he was one of her customers would make her even less attracted to him. So, there’s more shame, guilt, and embarrassment involved. Most men talk about e-thots like they’re trash, so what are they thinking about themselves when they are paying those same women money to arouse them? It’s messy, ugly and something they don’t have to worry about with a virtual woman like Projekt Melody.

Of course, at the end of the day, none of this stuff is healthy and you’re better off staying away from all of it. If you want to fantasize, fantasize about the girl down the block you might have a chance to be with instead of some bot or e-thot that doesn’t care if you live or die.