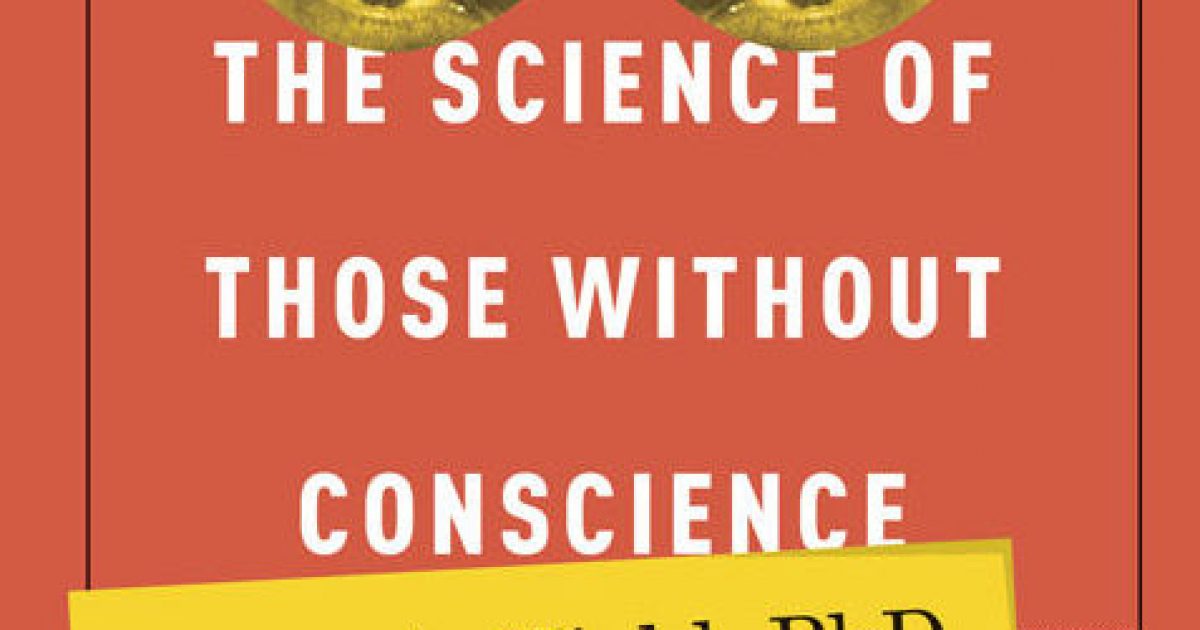 I have always found psychopaths to be fascinating, not so much because they’re intrinsically interesting, but because I’ve always wondered if the rest of us could learn to control their best features without being weighed down by their weaknesses. Science hasn’t figured that out yet, but maybe one day. In the interim, enjoy the quotes.

— Inmates commonly refer to the presumed tedium and boredom of having a simple job, wife, and house as the “white picket fence” syndrome. Actually, the majority of inmates admit they would be very happy out of prison and residing behind the white picket fence; psychopaths, however, can’t fathom it—they laugh at others who would dwell in such monotony.

— Psychopaths rarely know details about their children. Like Grant, they often don’t even know how many children they (might) have. I would come to realize during my research that psychopaths’ lack of connection with their children is one of the most salient features of the condition.

— Another difference between psychopaths and other inmates is that psychopaths don’t get distressed by being in prison. Most inmates get depressed when they get inside, and they find prison to be a stressful experience.

— As I told Seabrook, a little less than 1 percent of the general population, or about 1 in 150 people, will meet criteria for psychopathy. However, the number of psychopaths in prison is much higher than in the community because psychopaths tend to get themselves in trouble with the law. Studies indicate 15 to 35 percent of inmates worldwide will meet criteria for psychopathy—with more psychopaths being found in prisons with higher security ratings. I told Seabrook that something special seems to happen when the majority of psychopathic traits coalesce in the same person. I’ve often been quoted as saying that there is “just something different” about psychopaths.

— I often refer to psychopaths as a walking oxymoron: they say one thing and do another. Clinicians in the early days of psychiatry were mystified, confused, even stymied by the repetitive self-defeating behavior of psychopaths once they left the confines of the psychiatrist’s office, mental ward, or prison cell. Psychiatrists felt that psychopaths should simply learn from their bad outcomes (divorce, bankruptcy, arrests, conflicts with parents, siblings, and friends) and not repeat their poor decision making. But, to the chagrin of those conducting psychotherapy, psychopaths rarely if ever changed their pattern of behavior once they left the psychiatrists’ couches.

— Psychopaths are resistant to psychodynamic treatment, in part because they typically don’t feel there is anything wrong with them; they are rarely interested in participating in therapy or changing.

— Do you think that the victims of the psychopaths thought they were in danger? Of course not. They might have seen warning signs, they might have felt a little tug in their gut that something was off, but most victims of psychopaths don’t understand the kind of person they are dealing with, or they would have stayed far away.

— Cleckley reported that psychopaths never experience grief, honesty, deep joy, or genuine despair. From my own experience, I would add to Cleckley’s observations that the psychopath never ruminates on anything. Rumination is a process that often contributes to depression and in extreme forms to obsessive-compulsive disorder. The process of rumination is often associated with some anxiety or subjective feeling of concern or worry, and this can help precipitate change in the individual in order to reduce the anxiety. The psychopath experiences none of this. Indeed, if you ask a psychopath if he has ever worried about whether he left the house with the stove on (a common problem among those with obsessive-compulsive disorder), he will look at you like you are an alien, in stunned disbelief. Obsessive compulsiveness is completely foreign to the psychopath’s way of thinking. Psychopaths are on the opposite end of the spectrum.

— This is another hallmark characteristic of psychopaths. Punishment, real or threatened, does not alter the psychopath’s behavior.

— One of the most telling aspects of the letters is that none of the children are described as normal from birth. Parents say they noticed something different, odd, or abnormal about the child from the very beginning.

— Every adult psychopath that I have worked with was different from normal children from a very early age. Their prison files are typically replete with stories from siblings, parents, teachers, and other guardians about how as a child the psychopath was emotionally disengaged from other siblings, got in trouble more frequently, engaged in more severe antisocial behaviors, and started using alcohol and drugs and having sex at a younger age than other children. Most adult psychopaths report that as children they didn’t have close friends, didn’t feel the need to participate in any group activities like baseball or soccer, and if they did participate, they tried to cheat, got in fights, and generally did not enjoy playing with other kids. Psychopaths typically don’t get along well with their parents and often are very distant from their siblings. The nature of their early childhood often results in them being labeled the black sheep of the family.

— Like all adult psychopaths, Brendan had been different from his peers and siblings from a very early age. Brendan told me that as a child he would create vicious games where his dog had to run a gauntlet of traps in order to be fed.

— Fact: There are approximately 500,000 adult male psychopaths in the United States.

— It is sometimes difficult for the general public to understand that some people simply don’t learn or benefit from punishment.

— Dr. Hervey Cleckley had written called The Mask of Sanity. I mentally rehearsed the symptoms Cleckley had identified that characterized psychopaths. One of the most perplexing symptoms Cleckley named was Inadequately Motivated Antisocial Behavior. It is a symptom that is almost an oxymoron. I had been trained to believe that all behavior is motivated. But as I stared into that mirror, I truly understood for the first time what Cleckley meant when he included that symptom in describing psychopaths.