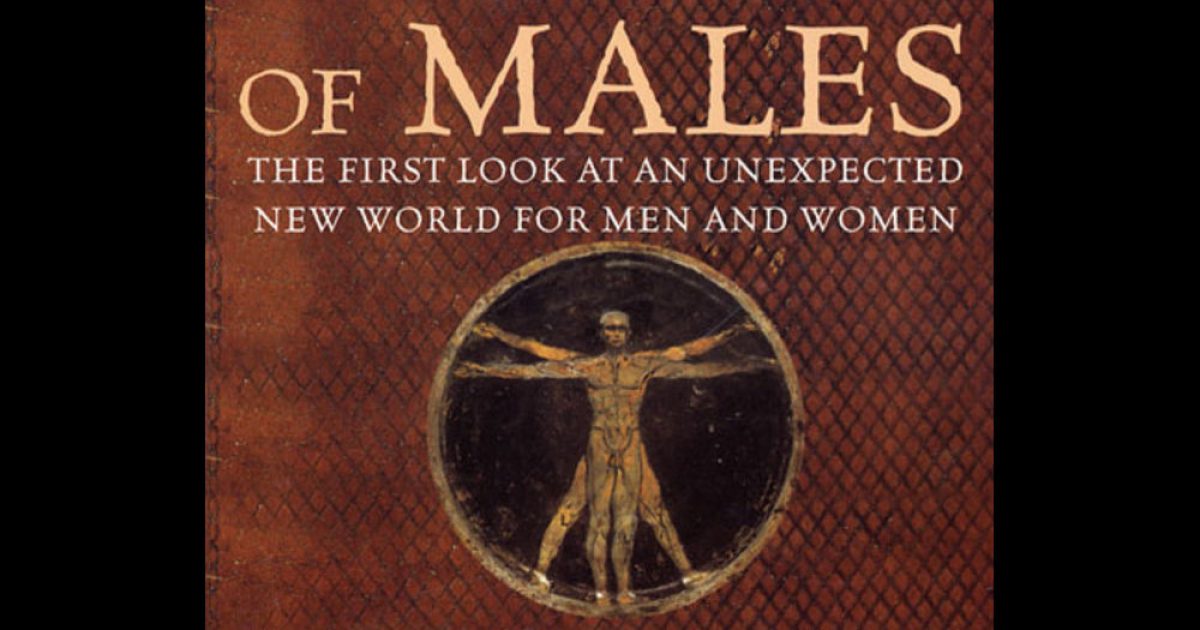 Lionel Tiger wrote a provocative book called, The Decline of Males: The First Look at an Unexpected New World for Men and Women

The book discusses the civilizational changes that have occurred in Western society over the last few decades and it pays particular attention to how those changes have impacted men. Although the book does focus on the negative impact the last few decades have had on men, the book couldn’t fairly be called anti-women or even pro-men. Stylistically, the book is statistics-heavy and has an objective tone to it. It was quite an interesting read. Do keep in mind, as you read the statistics, that the book was written in 2000. So, while the numbers are still relevant, they may be a bit out-of-date.

All told, there is a significant shift from the past in the relative power of men and women. In the United States productive system in the mid-90s women earned 7.6 percent more than they did in 1979, while men earned 14 percent less than they did then. Women earn 40 percent of family income. In the early 1990s at least one of six wives earned more than her husband; in 1968, it was one in eighteen. According to Gail Sheehy, by 1996 nearly one of three wives earned more than her husband. — P.5

But populations take industrialism for granted; people don’t think consciously about it…It is so pervasive and seemingly inevitable that few people realize it is barely ten generations old. But the nature of industrialism is sharply different from the nature in which we evolved that produced our human nature — which, remarkably and recklessly, we no longer seem to consider important. — P.13

But it is difficult to raise a child oneself. When men can’t or won’t help out or are not asked to, the state does. As a result, a remarkable new family pattern has emerged. I call it bureaugamy. A new trinity: a woman, a child, and a bureaucrat. Not monogamy. Not polygamy. Bureaugamy. — P.21

As we have seen, in 38 percent of American child support orders the fathers expected to supply the funds may have neither visitation nor custodial rights. — p.23

When you next inspect that creature in the mirror, know that your human family lineage is about 4 million years old. Throughout virtually all of this long history we survived as hunters and gatherers. We lived directly off the land in communities that seem to have ranged in size from twenty-five to two hundred souls. — P.30

There is good evidence…from documents about wedding dates and the birth dates that around the turn of the last century between 30 and 50 percent of marriages occurred during a pregnancy. — P.33

In some areas, as many as 25 percent of the young men are either in prison, on parole, or in some other severe relationship to the criminal justice system, and they are unlikely to retain nourishing links to civilian society. One heartbreaking indication of this is that while imprisoned “fewer than 5 percent of all inmates in New York state are ever visited by anyone. — P.74

A broad assertion made by feminists and many social scientists in the 1970s was that traditional maleness is faintly or even fully absurd and that the female way is the correct way. Such thinking has created a paradoxical perception: Sex differences are essentially unimportant, yet females are superior. — P.81

Meanwhile, women work on. Those who have been employed 80 percent of the time since their first child was born are two times more likely to be divorced than nonworking mothers. — P.110

As an example from a simpler animal with simpler needs than ours for social competence, a six-day separation of young rhesus monkeys from their mothers produced significant consequences in the infants’ level of anxiety and fearfulness thirty-two weeks later. — P.111

Later in life the average American woman earns 77 percent of what men earn. This statistic is widely quoted but seriously misleading. It is based on whole groups of male and female adults having different characteristics. The principal one is that average woman has been in the labor force six years less than the average man, leaving usually to bear and care for children, often for years at a time. In addition and directly linked to this, women are far more likely than men to work part-time, an option that many women choose precisely because they are then able to meet the various obligations that they have. Inevitably, they accumulate less seniority. The difference between the average male and average female income would be more than eliminated by a 5 percent annual increment in salary over five years. If women did not leave the labor force, even temporarily, the relatively normal development of the career would create parity between the groups. — P.124

The social trend is clear. The growth in jobs for women outpaces that of males. In Europe, additional jobs for females has totaled thirteen million in recent years but only 600,000 for males. The economic movement is women up, men down. MIT economist Lester Thurow has described how among American men between twenty-five and thirty-four the median wage is down 25 percent, and one third of them earn less money than is needed to keep a family of four at or above the poverty line. If they abandon their family responsibilities, their income jumps by 73 percent. But they no longer have families. — P.127

Let’s put this in perspective. Romantic love is not a widespread basis for marriage, The overwhelming proportion of marriages in the world continue to be arranged by the parental generation. — P.129

Recall Margaret Mead’s “Fatherhood is a human invention,” and it has to be supported. Forms of male dominance in marriage are a way of preserving this invention. Paradoxically, they also discipline men by imposing on them an extraordinary lifelong financial if not also emotional responsibility to spouses and children. — P.130

It was Karl Marx’s observation that the capitalist system would have to pay industrial workers just enough to support a man and his family, not a shilling more. It is worth reemphasizing one of the most remarkable features of the situation overall: Men who were industrial workers or managers spent their entire adult lives at work and by and large turned over all their income to their wives and families. — P.137

At least for a time after a baby is born couples appear to withstand or suppress the exciting attractions of new potential partners. Helen Fisher showed that the most common time for a divorce is after four years of marriage. This is just about the minimum time for the human pair to bring a child to sufficient competence, assuming pregnancy occurred before marriage or the child was conceived soon after. — P.159

In the United States in 1960 — before good birth control — only 5 percent of all American births were outside marriage. The rate was 22 percent for black Americans. Thirty years later, the national number had risen to 24 percent. — P.161

If liberation means the absence of unavoidable irrefutable obligation, women’s liberation has backfired. It is men who have been liberated. They needn’t be husbands or fathers to assure themselves of social status. They can be ex-husbands or part-time fathers. They are not required to support women and children for life. They may experience transient social or sexual variety with a range of partners. — P.184

The number of households containing kids under eighteen and headed by mothers more than doubled between 1970 and 1990. — P.190

For some tangled reason, public comfort flows from the claim that differences result from prejudice and other disreputable legacies of a sexist past, rather than from real differences based on evolutionary success. It assumes the worst of the past, the best of the future, with little attention to the choices made by people in the present. — P.215

Even people who understand the importance of biological factors in social organization may hesitate to draw direct conclusions from what they know is true. Consequences flow. An important one is in the American legal system. It takes as a given that any statistical differences between men and women reveal faulty arrangements. It takes as a given that with good will, stern law, and remedial craft these differences can be eliminated, prejudice can be excised, and equity can be ensured. Any deviation from this is the result of bad nurture, not recurrent nature. In military training or scores on tests or even longevity, differences are held to reflect imperfect opportunities for women or resistant hostile action by men or a complex combination of similar factors. — P.238

You can teach a bear to tango on a barrel but his enthusiasm and performance are limited and brief. He will prefer to do something else unless you continue to needle and bribe him. — P.251

A young man dated a young woman at a New York college with a lively women’s studies program, of which she was an enthusiastic accomplished member. One evening he was present when some of its students discussed their futures. They turned to the subject of children. With warmth and anticipation they spoke of the books they would read to their daughters, the role models they would be to growing girls, the anti-sexist upbringing they would provide daughters. The young man destroyed their reverie with: But what if you have sons?” An ideology devoted to one sex won’t suffice. — P.259