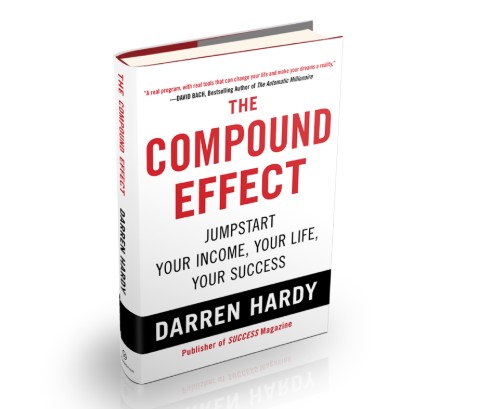 I really loved Darren Hardy’s The Compound Effect: Jumpstart your income, your life, your success. Time and time again I read what Hardy wrote and thought, “Man, this guy is just spot-on.” Read these quotes from the book and I think you’ll see why.

Dad’s discipline served as an example for me. Dad was my idol, and I wanted him to be proud of me. I also lived in fear of disappointing him. One of his philosophies is, “Be the guy who says ‘no.’ It’s no great achievement to go along with the crowd. Be the unusual guy, the extraordinary guy.” — P.7-8

The truth is, complacency has impacted all great empires including, but not limited to, the Egyptians, Greeks, Romans, Spanish, Portuguese, France, and English. Why? Because nothing fails like success. Once-dominant empires have failed for this very reason. People get to a certain level of success and get too comfortable. — P.18

We all come into this world the same: naked, scared, and ignorant. After that grand entrance, the life we end up with is simply an accumulation of the choices we make. — P.23

We are all self-made men and women, but only the successful take credit for it. — P.28

To help you become aware of your choices, I want you to track every action that relates to the area of your life you want to improve. — P.34

Tracking is my go-to transformation model for everything that ails me. — P.37

Psychological studies reveal that 95 percent of everything we feel, think, and achieve is a result of a learned habit! — P.56

When your actions conflict with your values, you’ll end up unhappy, frustrated, and despondent. In fact, psychologists tell us that nothing creates more stress than when our actions and behaviors aren’t congruent with our values. — P.66

One thing Jim Rohn taught me is: “If you want to have more, you have to become more. Success is not something you pursue. What you pursue will elude you; it can be like trying to chase butterflies. Success is something you attract by the person you become. — P.72

Habits and behaviors never lie. If there’s a discrepancy between what you say and what you do, I’m going to believe what you do every time. — P.76

Pick a vice — something you do in moderation, but you know doesn’t contribute to your highest good — and take yourself on a thirty-day wagon run. If you find it seriously difficult to abstain for those thirty days, you may have found a habit worth cutting out of your life. — P.83

Leadership expert John C. Maxwell said, “You will never change your life until you change something you do daily. The secret of your success is found in your daily routine.” — P.84

There is a one thing that 99 percent of “failures” and “successful” folks have in common — they all hate doing the same things. The difference is successful people do them anyway. Change is hard. That’s why people don’t transform their bad habits, and why so many end up unhappy and unhealthy. — P.90

Some of our best intentions fail because we don’t have a system of execution. When it comes down to it, your new attitudes and behaviors must be incorporated into your monthly, weekly, and daily routines to affect any real, positive change. A routine is something you do every day without fail, so that eventually, like brushing your teeth or putting on your seatbelt, you do it without conscious thought. — P.99

Jim Rohn taught me that life is simply a collection of experiences; our goal should be to increase the frequency and the intensity of the good experiences. — P.108

Miss only a couple weeks of anything — workouts at the gym, affectionate gestures toward your spouse, or the phone calls that are part of your prospecting routine — and you don’t just lose the results those two weeks would have produced. If that’s all you lost (which is what most people assume), not much damage would be done. But by slacking off for even a short time, you killed Mo. It’s dead. And that’s a tragedy. — P.115

The people with whom we spend our time determine what conversations dominate our attention, and to which attitudes and opinions we are regularly exposed. Eventually, we start to eat what they eat, talk like they talk, read what they read, think like they think, watch what they watch, treat people how they treat them, even dress like they dress. They funny thing is, more often than not, we are completely unaware of the similarities between us and our circle of five (friends). — P.127

I’m constantly weeding out of my life people who refuse to grow and live positively. — P.130

Remember that you get in life what you tolerate. — P.138

It’s amazing how life will organize around the standards you set for yourself. — P.139