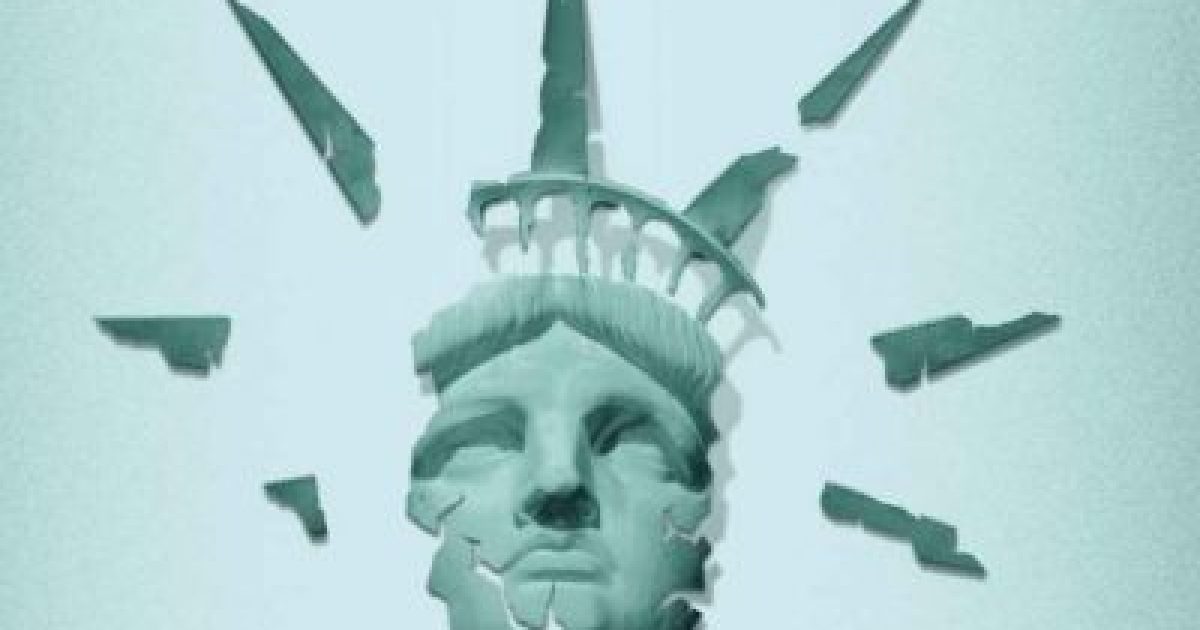 I am generally a fan of Jonah Goldberg’s work and I thought his book, Suicide of the West: How the Rebirth of Tribalism, Populism, Nationalism, and Identity Politics is Destroying American Democracy was superb. I discussed the book with him in a Planet Hawkins podcast, but I just realized I hadn’t done the best quotes from his superb book. So, read and enjoy!

25) The greatest check on the natural human desire to give in to your feelings and do what feels good or even what feels “right” can be captured in a single phrase: “God-fearing.” The notion that God is watching you even when others are not is probably the most powerful civilizing force in all of human history.

24) Complexity is a subsidy. The more complex government makes society, the more it rewards those with the resources to deal with that complexity, and the more it punishes those who do not.

23) Settled communities are communities of specialized laborers. To understand the power of the division of labor, consider the case of the humble sandwich. In 2015, a man inspired by the canonical libertarian essay by Leonard E. Read, “I, Pencil,” set out to make a sandwich from scratch—i.e., with no products he didn’t make himself. He grew his own vegetables, distilled salt from seawater, milked a cow, and used the milk to cultivate cheese. He pickled a cucumber in a jar, grew his own wheat, and ground it into flour for bread. He collected his own honey, and killed a chicken himself for the meat. The whole process took him six months and cost him $1,500. At the end of the project, he issued his verdict on his sandwich: “It’s not bad. That’s about it. It’s not bad.” Even here, he took shortcuts. He didn’t buy the cow or scour the countryside for the seeds, etc.

22) As psychiatrist and science blogger Scott Alexander writes: As the feminist movement gradually took hold, women conquered one of these fields after another. 51% of law students are now female. So are 49.8% of medical students, 45% of math majors, 60% of linguistics majors, 60% of journalism majors, 75% of psychology majors, and 60% of biology postdocs. Yet for some reason, engineering remains only about 20% female. And everyone says “Aha! I bet it’s because of negative stereotypes!”

21) There’s a reason why American liberals express such admiration for the European model: They tend to think like Europeans. American liberals are three times more likely than conservatives to tell pollsters they want the government to “do more” to reduce income inequality. At the same time, conservatives who believed that the government should not tackle income inequality gave four times as much money to charity as liberals. In 2002, people who said the government is “spending too much money on welfare” were more likely to help a homeless person with a gift of food or money.

20) There is no “right side of history.” Nothing is foreordained.

19) Capitalism is the most cooperative system ever created for the peaceful improvement of peoples’ lives. It has only a single fatal flaw: It doesn’t feel like it. The market system is so good at getting people—from all over the world—to work together that we barely notice how much we’re cooperating.

17) We judge the strides we make in the present by the extent of our improvement over the past. But we have an annoying tendency to judge the past by the standards of the present.

16) Cotton magnate Edward Atkinson spelled it out. Addressing some workers in 1886, Atkinson tried to explain how everyone gained from a free market. Cornelius Vanderbilt, Atkinson observed, made a profit of 14 cents from every barrel of flour shipped over his railroads. His efficiency lowered the price of flour for consumers. “Did Vanderbilt keep any of you down,” challenged Atkinson, “by saving you $2.75 on a barrel of flour, while he was making 14 cents?”

15) But tolerance is a two-way street. In a decent society, the majority owes respect to the minority. And the minority owes the majority respect as well. That bargain has fallen apart, most acutely in Europe, but America is not far behind, as the champions of identity have grown in power. The story has been embellished to the point where the majority are not cast as tolerant and decent citizens trying to figure out how we should live with one another; the majority are now simply villains.

13) Ron Haskins, also of the Brookings Institution, has identified what he calls the “success sequence”: “at least finish high school, get a full-time job and wait until age 21 to get married and have children.” If young people do just these three things, in that order, they are almost guaranteed to climb out of poverty. “Our research shows that of American adults who followed these three simple rules, only about 2 percent are in poverty and nearly 75 percent have joined the middle class (defined as earning around $55,000 or more per year).”

12) The sacrifices inherent to parenthood require an enormous amount of social support to remain attractive, particularly in an age when there are so many enjoyable distractions made possible by the mass affluence of capitalism. Joseph Schumpeter recognized that the family was the one indispensable institution to liberal democratic capitalism. The sacrifices it demands of parents, he said, “do not consist only of the items that come within the reach of the measuring rod of money.”37 They demand more intangible things, like time, emotional commitment, and the subordination of our wants and desires to the needs of our children. These sacrifices need to be honored, publicly and passionately.

11) The grave danger, already materializing, is that whites and Christians respond to this bigotry and create their own tribal identity politics. I don’t think the average white American is nearly as obsessed with race, never mind invested in “white supremacy,” as the left claims. But the more you demonize them, the more you say that “whiteness” defines white people, the more likely it is white people will start to defensively think of themselves in those terms.

10) Irving Kristol observed that there are no non-capitalist economic theories. I think that is right. The moment a supposedly alternative economic system stops recognizing the role that markets and prices play, it ceases to be economics and becomes some romantic ideology that borrows from the language of economics to sound more attractive or authoritative.

9) The startling truth is that nearly all of human progress has taken place in the last three hundred years (and for many of the billions of non-Westerners lifted out of crushing poverty thanks to capitalism, it’s happened in the last thirty years).

8) The theory that capitalism came out of Protestantism may not explain it all, but it explains a lot. Believing that God is not only watching you but has high expectations creates one kind of society. Believing that getting “likes” on Facebook, Twitter, Instagram, or Snapchat (or whatever comes next) undoubtedly creates another kind.

6) We talk about murder and rape as unnatural as a way to heap deserving opprobrium on the practice even though, as we’ve seen, neither is actually unnatural. Adultery is wholly natural, but we condemn it as a violation of important norms to keep the habit to a minimum. “Very often those things we have condemned as ‘unnatural’ are things that we know will flourish if we leave them alone,” writes Robin Fox in The Tribal Imagination: Civilization and the Savage Mind.

5) The Miracle of liberal democratic capitalism is not self-sustaining. Turn your back on its maintenance and it will fall apart. Take it for granted and people will start reverting to their natural impulses of tribalism. The best will lack all conviction and the worst will be full of passionate intensity. Things will fall apart.

4) My argument begins with some assertions: Capitalism is unnatural. Democracy is unnatural. Human rights are unnatural. The world we live in today is unnatural, and we stumbled into it more or less by accident. The natural state of mankind is grinding poverty punctuated by horrific violence terminating with an early death. It was like this for a very, very long time

3) Again, one need not be categorically opposed to ethnic groups or other minorities flexing their muscles in a diverse society. That’s a story as old as the country and is unavoidable in any society. The key distinction, once more, is that some within these groups are not merely fighting for their piece of the pie or for recognition of their legitimate interests. They are seeking to overthrow the ideals that made this country so successful in the first place. They are not merely arguing that the system needs to live up to its own ideals, which was the argument of the suffragettes and the civil rights movement. They are arguing that the ideals themselves are illegitimate.

2) What was once considered the only noble motivation for a hero, a conception of good outside himself, has been replaced by what Irish philosopher David Thunder calls “purely formal accounts of integrity.” According to Thunder, “purely formal accounts essentially demand internal consistency within the form or structure of an agent’s desires, actions, beliefs, and evaluations.” He adds that, under purely formal integrity, a person “may be committed to evil causes or principles, and they may adopt principles of expediency or even exempt themselves from moral rules when the rules stand in the way of their desires.” In other words, if you stick to your code, no matter what you do, you can be seen as a hero. It’s this sort of thinking that has led Hannibal Lecter, a character who barbarously murders and eats(!) innocent people, to be seen as something of a folk hero.

1) The Miracle of human prosperity from 1700 to now looks like a rocket taking off. Some think we’ve achieved a permanent and stable orbit from which we can look down on the tiny speck that is our tribal past. But there’s no such thing as a stable orbit. We must accelerate and maintain the equipment or fall back to the place whence we came. When the gravitational hand of nature reclaims objects from the heavens, the term for that in physics is “orbital decay.” So it is with our civilization. Give up fighting for it, give up holding human nature at bay, abandon our principles for any reason—selfishness, sloth, forgetfulness, ambition, ingratitude, whatever—and you choose to give in to decay.