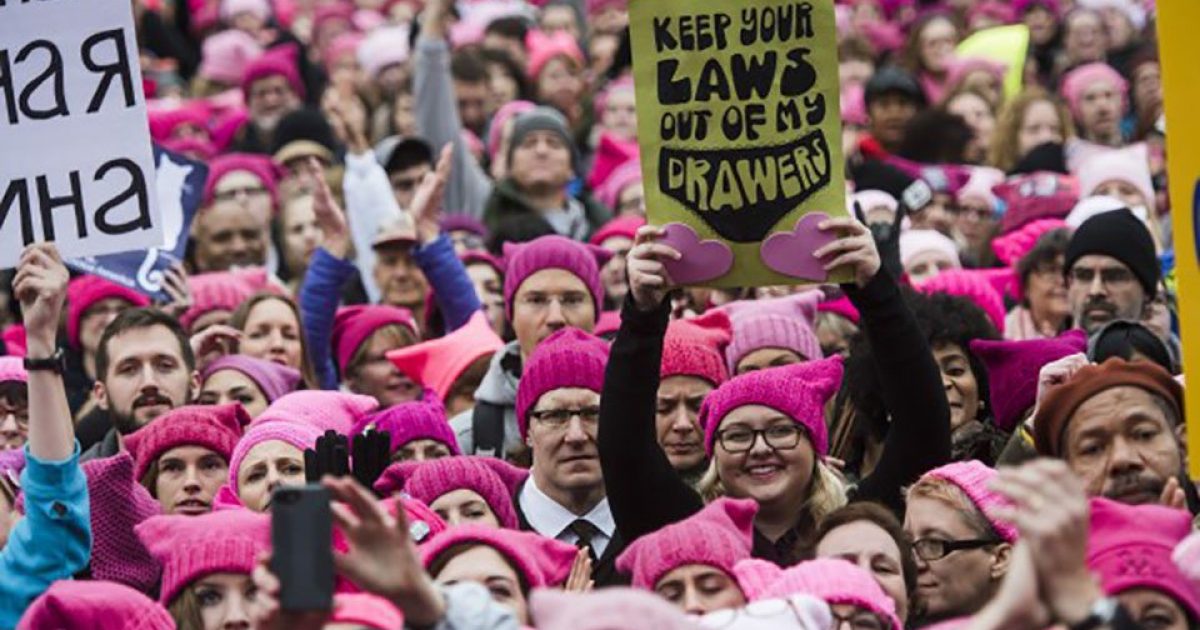 In a few short decades, I have observed the formation of some disturbing new cultural phenomenon in America and I wanted to give you the countdown of the MOST revolting of them. Can you guess what they are?

I remember when we use to go sit outside and talk to our neighbors, looking them in the eye and even bringing by a plate of cookies every occasionally. Why did we do this? They were the people in our nearest vicinity, I guess. Back then, we talked to people face to face or sometimes on the phone. This recent revolting culture of worshipping our newest iPhone (I remember the iPhone before it had a number and the iPhone 8 is still a MacRumor) and hating the person who has more newly released technology than yourself, just makes me sick. Becoming so possessive of something that is a mere tool, then spending more time with it than you spend with actual people is so unhealthy but has become a BIG part of our culture. Most people in any given restaurant at any given time will have their cellphone on them and will be actively checking it for updates, even if they’re at lunch with friends. It’s disgusting to observe if you’re still a civilized person with manners. Worshipping your electronics has become one of the most loathsome sides of American culture because most people do not even recognize what they have lost creating stronger bonds with their droids than their spouse or children. I don’t see Americans sliding back from this one because it’s an addiction that’s not acknowledged, thus will never be treated, only fed by the dings and beeps that tell the user that some random person they’ve never actually met has posted something they only mildly care about on their favorite social networking site.

This was one of the most damaging concepts to sneak into American culture, the ‘participation trophy’. When I was a kid, adults rewarded kids for achievement. For getting the highest grades in class, for being the first to cross the finish line, for kicking butt in the potato sack race. Yes, these 1st place awards were available to me to achieve even as early as Kindergarten. A couple of decades ago teachers began by giving awards to everyone who participated and eventually they stopped rewarding for high achievement. The revolting culture that resulted was entire generations of mediocre young adults who believe that they deserve kudos for just trying, even if they accomplished nothing. Even in the current common core math, some teachers give points for wrong answers if you can give an explanation of how you came to your wrong answer. The disappearance of “First Place” has replaced Americans drive to achievement and be the best and do it better to live in your parents’ basement. Snowflake millennials wear a safety pin as a signal to their friends that they’re a safe space to not experience any judgment. No judgment means no one needs to strive to be better. No need to strive… there’s no first place to land on anyhow, plus you get a participation trophy!

Kim Kardashian was the stylist of Heiress Paris Hilton. She was basically a nobody until 2007 when someone leaked a sex tape of her. The tape was distributed commercially and she got $5 million out of the deal. Her dirty antics landed her and her family on the E! reality television series Keeping Up with the Kardashians.

The Kardashian culture proved to be shallow without any value for anything, reflecting only the basest immoral behaviors of the fringes of society. Then for some crazy reason, her family’s culture caught on and Americans started trying to keep up with the Kardashians. In recent years, Kardashian has grown an influential online and social media presence, including tens of millions of followers on Twitter and Instagram— followers who have become mini-revolting-Kim-Kardashians. Sigh.

America was saddened when John Wayne and Jackie Onassis died. But I have become not saddened, but revolted watching the death of the culture they inspired. With the style and grace of Jackie O and the strength and class of the Duke, they enhanced and inspired the best things about American culture. John Wayne was the epitome of manhood, throwing out phrases that would inspire any young man like, “Courage is being scared to death but saddling up anyway.” Being like John Wayne was something to aspire to for young men just like many young women aspired to be as womanly as Jackie. Her style and way that she handled herself, made her the icon of the American woman. The tragic passing of that culture has brought on a new culture of disrespectful, spineless wannabes who could take ‘America’ or leave it. Who are fine without integrity, class, and self-respect? Giving up is okay and who cares about your personal reputation in this new revolting American culture.

John Wayne would be rolling in his grave to see men wearing flowered pants, rompers and saggy pants that NO self- respecting man would walk the streets in. Jackie would be polite enough not to say anything as she cringed at the I don’t care how I look ‘Walmart’ female shopper and pajama legging wearing women on airplanes. We have fallen far from the Duke and Jackie O.

When I was in High School, I knew a freshman who had already had 6 abortions by the time she was a Freshman. I guess her mom was starting her young on her road to feminism. American culture teaches that aborting an unborn baby is a woman’s right. And I’m not talking about a right to do it or not to do it… but it’s almost become a rite of passage as a woman. I personally believe that the American woman’s lack of personal responsibility and self-control and the use of abortion as a lazy form of birth control is reprehensive. But abortions aren’t as revolting as the fact that Planned Parenthood has been making a profit off aborted baby parts. If you had a time machine and traveled to any time in history and told people that the future held regular population people removing babies from a woman’s womb and then selling them—people of the past would have no love for the savage people of the future. What other major culture in time has sold baby parts just after killing the babies or fetus as some like to label them?  This isn’t a just became part of American culture last year kind of thing. Every 10 years there is an expose on it happening and yet, it continues and with each expose it becomes more and more acceptable in American culture. The selling of baby body parts is highly revolting!

A few years ago, I went to my child’s computer to see what game he was playing.  He was watching Pokémon episodes which were his favorite. I suddenly became alarmed when I saw this picture: 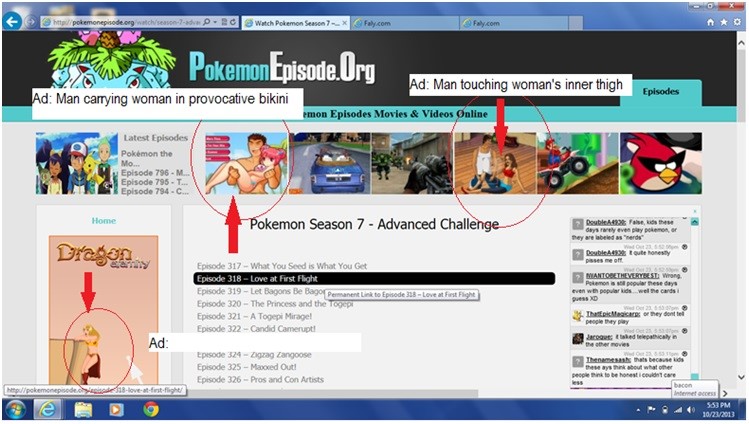 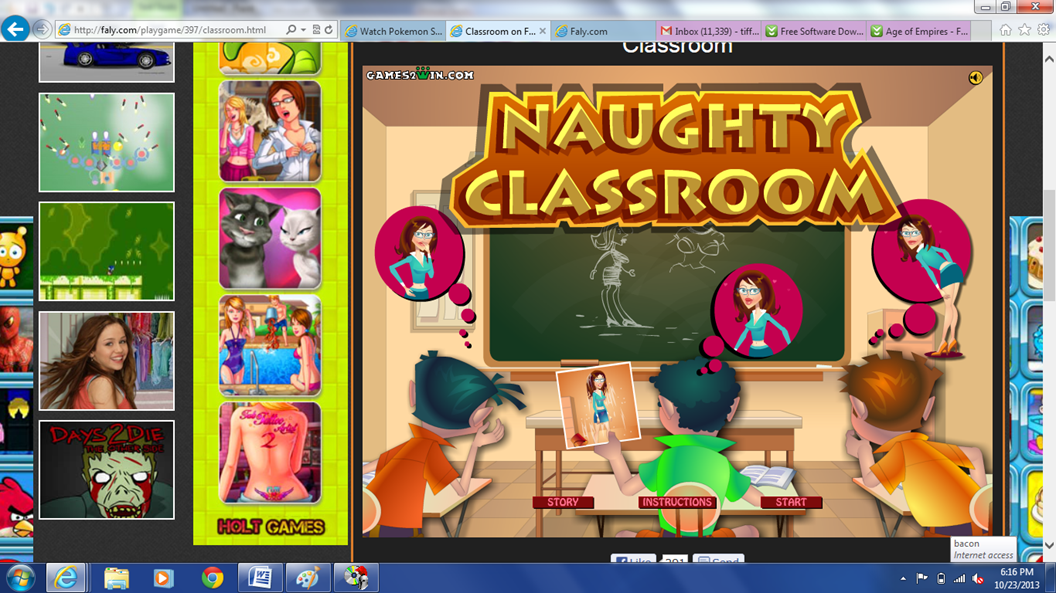 [pictured above] See how the cartoon ads on the left side get more provocative once I clicked further. Upon starting the game I was instructed to do things in the classroom to put the teacher in a ‘compromised situation’ to ‘fulfill your adolescent fantasy’. Even worse is that teens aren’t on this website, children are; making it even more repulsive. It instructs you to use your ‘wicked mind’ which causes the teacher to lose different articles of clothing and even one move makes teacher trip breasts first into a boy. It’s gross, provocative, WRONG, teaches violence and is harmful to children and teens to participate in pornographic games. It is a sick culture that allows children/teens to consume any form of pornography to cause sexual excitement. It is associated with many negative emotional, psychological, and physical health outcomes.  These include increased rates of depression, anxiety, acting out and violent behavior, younger age of sexual debut, sexual promiscuity, and a distorted view of relationships between men and women.  The only way to STOP this culture is to have your kids’ computer in your Living Room where you will be and look at that screen often because while kids aren’t looking for this type of entertainment… it IS seeking your child. Talk about pornography with them starting at the age of 10 especially for boys and help them to create a plan of walking away from the computer if ANYTHING comes up that makes them feel interested of aroused and come get you. If you plan, watch like a hawk, NEVER allow any kind of internet in the bedrooms or bathrooms (that’s cellphone and tablet access moms), don’

NOW, HERE— is THE most revolting thing about American culture…

WHO, just who came up with this dumb and revolting trend? PussyHatProject.com sent out the instructions to get feminists everywhere knitting their very own vagina-like hat to wear on their heads.

We all thought it was for a one-time rally, but I’m afraid that the only thing that has gotten these ladies to remove their vagina hat is warm weather. I predict that next winter those v-hats will be on heads again horrifying any person with respect for womanhood and morality.

Horrible examples of women like Ashley Judd, helped excite feminists everywhere to wear a vagina on their head (some with pubic hair) too because of her “I’m a nasty woman” speech. Women aren’t nasty, they are amazing. Unfortunately, when self-respecting women (not feminists) have a spokesman for their sex like Ms. Judd— they just gotta go hide in the closet for being associated with that degrading-to-womanhood-group.

Don’t be disappointed or give up on America. I only highlighted the worst but there are so many things about America and the American people that are amazing that these revolting things should pale in comparison. God Bless America!