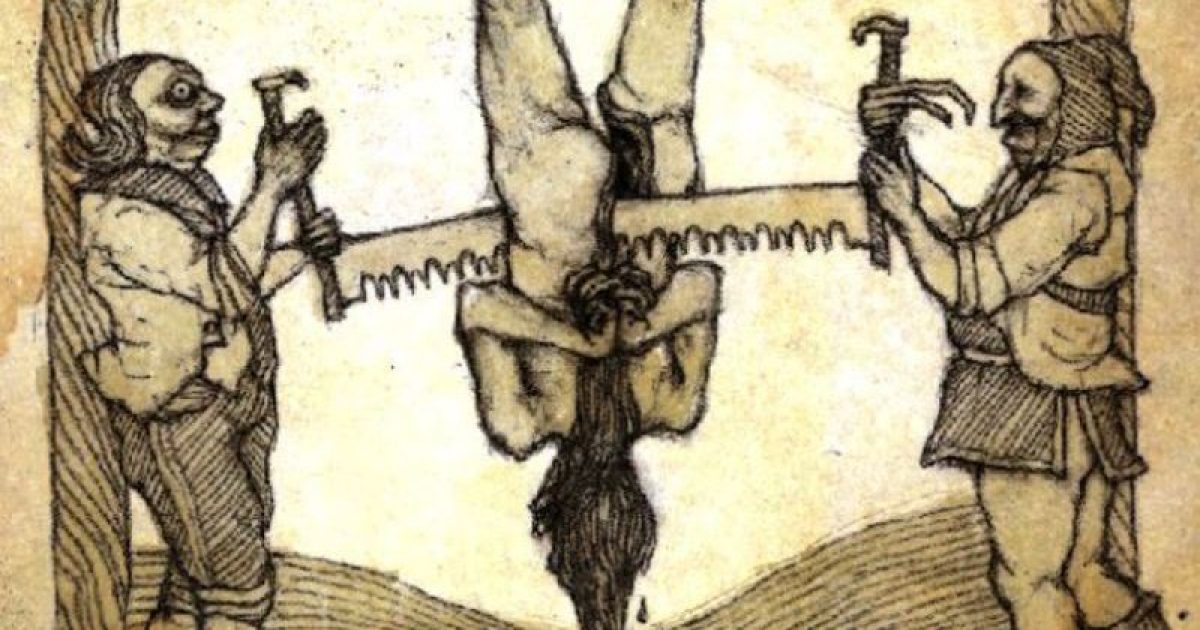 Torture has been around as long as human beings have and some of the devices used have become legendary. The rack, the iron maiden, thumb screws – none of them are very pleasant. However, when you’re talking about torture, there are some cruelties that stand out beyond all others.

1. Scaphism AKA the Boats AKA the Tub

The Persians were big fans of a gruesome torture method that began by binding the person in place. Depending upon the method, either the head, hands and feet, or just the head was sticking out of the boat and/or tub the person was confined in. At this point, the victim was then covered with and fed copious amounts of milk and honey. This caused all sorts of flies, beetles, worms and bugs to feast on the exposed flesh. The massive amount of milk and honey consumed also caused the victim to defecate, which led to hungry swarms of maggots and other biting creatures feeding on his body. Death by this method could take more than two weeks.

2. The Breaking Wheel AKA the Catherine Wheel

In France and the Roman Empire (among other places), the victim was placed on a slowly spinning wheel. Then, clubs would be used to break the victim’s arms and legs. As horrible as that sounds, the pain was just beginning because the victim would then be left on the wheel to suffer with his horrible injuries until he died, which could take a few days.

As per usual, the Persians were ahead of the curve in introducing this torture which came into its own under Vlad the Impaler. During impalement, a blunt pole was shoved into the anus. It was not too deep at first and the victim could support himself on his toes. Of course, that still left the victim standing with any slip driving the pole painfully into the body. This agony could go on for days and it was worsened by the fact that fat used to grease the pole attracted bugs to get into the wound.

This torture device from the Spanish Inquisition is theoretically the least fatal device on the list. Imagine a high stool with a triangle on top of it that the victim’s anus was stretched over. If the torturer didn’t like the answer, then the victim would be pulled down deeper onto the triangle. That could be via a sudden drop or done by a slower process with weights. Sometimes, the slow impaling of the victim would continue overnight. If the victim didn’t die from the horrific process, he usually died from an infection afterward because the device was rarely ever cleaned.

The Romans were particular fans of this horrific form of torture and it was rather famously used on Jesus Christ. Typically, the victims were brutally whipped first. Then their hands and feet were nailed to the cross. As you might imagine, that would be extremely painful, but it was just the beginning of the victims’ agony. Typically, the victims died of suffocation after they could no longer hold themselves up. If that took too long, guards would break the legs of the victims to speed up their demise.

This torture was used in Thailand and Ceylon and there have even been reports of Japanese soldiers using it in WWII. Bamboo and the Nipah are extremely fast-growing, tough trees. The victim was tied in place above young shoots of the trees and then the torturers simply let nature take its course. The trees would soon reach the body and continue growing right through it. Mythbusters did an episode on this topic back in 2008 and found that a bamboo shoot could potentially grow through a human body in 3 days’ time.

In this torture favored by the Persians and the Romans (among others), the unfortunate victim would be hung upside down with his legs spread. Then two torturers would begin sawing. The only thing worse than the excruciating pain of being sawed to death lengthwise is the fact that being upside down would keep you alive longer.