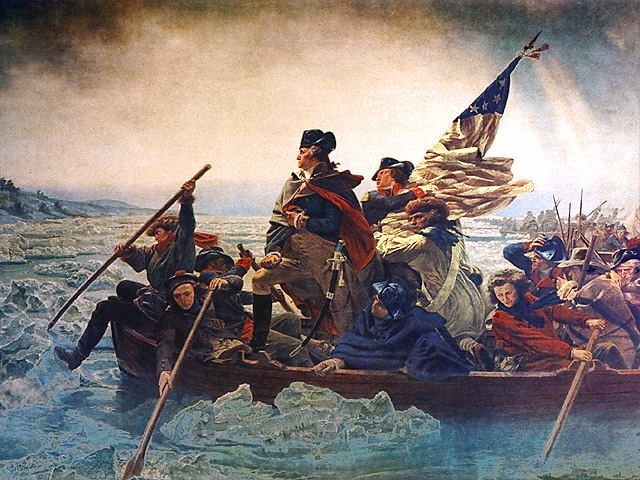 The first president of the United States​​ crossed a frozen river – on​​ Christmas Eve – to​​ bring war to the Hessian forces stationed in Trenton, NJ.  ​​​​ The sneak attack was a blazing success. ​​ He not only killed a bunch of British oppressors, he stole the survivor's food and blankets. ​​ It was a much needed shot in the arm for the beleaguered (and freezing)​​ troops. ​​

His big personality, hard-charging attitude and vulgarity-peppered public statements made him something of a superstar in the US during WW2 – and even the German High Command had enormous respect for him. ​​ He participated in campaigns all over Europe during the war..​​ He​​ died from complications of a car accident on December 21, 1945.​​ ​​

General Pershing made his name as the commander of the American Expeditionary Force on the Western Front in WW1. ​​ He believed that all of Germany had to be occupied led to some decisions that others questioned, like sending 600,000 men into battle for 47 days straight. ​​ But in the end, he was part of the victory in WW1.  ​​​​ He was the only general in his own lifetime promoted to the General of the Armies rank – the highest possible rank in the United States army.​​

During World War One, Eisenhower trained troops for the tank corps and the brigade he was training was under the command of General George S Patton. ​​ The two became good friends, possibly because they were exact opposites. ​​ Where Patton was loud and brash, Eisenhower kept his own council. ​​ And while Patton was an amazing general, Eisenhower was probably a more strategic and intellectual general. ​​ Five days after Pearl Harbor was bombed, ​​ he was back in the midst war. ​​ Within three years he was Supreme Allied Commander. ​​ His battlefield successes alone would have made him a legend – but he went on to become President, cementing his legacy in American history.​​

In 1991, "Stormin' Norman" drove Saddam Hussain's forces from Kuwait in a lightening-quick operation known as Operation Desert Storm. ​​ Deploying troops behind enemy lines and then rounding them into the welcome arms of Americans earned him – and the US – a good victory. ​​ "Leadership is a potent combination of strategy and character. ​​ But if you must be without one, be without strategy."