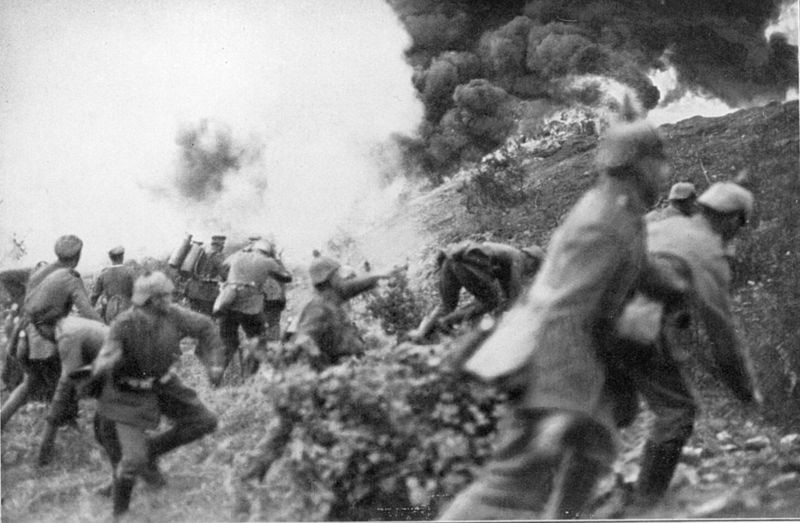 The battles listed below, all of which took place in the 20th​​ Century, claimed between them over 20 million lives. The mechanisation of war, and the development of area bombing,​​ meant that whole armies could be wiped out​​ during​​ one battle.​​ Unsurprisingly, most of these battles involved the Soviet Union, due in part to the size of its army, but also to the ferocity of the fighting between the Soviet and Nazi forces in WW2.

In June 1941, Hitler broke the non-aggression pact he had with Stalin, and invaded the Soviet Union with 3.8 million men.​​ ​​ It was the largest invasion in history.​​ Until this action, the Nazi state had been unstoppable, rolling over Western Europe with ease. But the Red Army was far tougher, and far more disciplined than Hitler had anticipated. Despite stunning early successes, the Germans failed to take Stalingrad, Leningrad, or Moscow. Losses were heave on both sides, and in the end, after sustaining losses equivalent to the population of a small country, the Germans retreated in humiliation.

The German siege of the city previously, and currently known as St Petersburg, started as part of Operation Barbarossa, but when the rest of the German army retreated in 1941, the divisions besieging Russia’s second city remained. For 900​​ gruelling​​ days the Germans blockaded Leningrad, and bombarded the city from its positions. The Soviets lost over 1 million soldiers​​ killed or captured and a further 2 million wounded,​​ as well as an estimated​​ 600,000 civilians​​ killed.​​ The​​ Wehrmacht​​ lost half-a-million​​ men and​​ endured​​ three​​ devastating Russian winters. Astonishingly, the Red Army still had the capacity to launch a counter offensive in the winter of 1943. This broke the German will and the Nazis finally retreated, leaving behind them only death and long, bitter memories.

After the ferocity of Barbarossa, and while the siege of Leningrad was ongoing, Joseph Stalin determined that he would launch a massive offensive against the German eastern front. The Soviets attacked along a 1,400 kilometer front across the Dnieper, the third widest river in Europe. They threw 2.6 million men into a frontal assault against a well defended German army of 1.6 million. The Germans counterattacked fiercely and the fighting continued at full force for four months. At the end of the offensive, the Germans were forced to retreat further west, and 2.4 million men, both Soviet and German, lay dead or wounded.

The major Russian contribution to the outcome of WWI occurred just over a year before the Revolution forced the Russian Empire out of the war. Determined to destroy the Austro-Hungarian Army, Tsar Nicolas approved a massive assault by 1.7 million men under the command of Aleksei Brusilov. The attack took place in an area that is now Western Ukraine. The Austrians were taken by surprise and the Russians could advance over a wide front. After 4 months of fighting, the Austrians had lost well over a million men, and effectively ceased to be a force in WWI. ​​

This was the last major offensive of WW2 in Europe. Following earlier successful advances,​​ the Soviet army paused outside Berlin in February 1945. ​​ This allowed the Germans to plan a last-stand defense of their capital city. The Soviet offensive resumed on April 16 and attacked Berlin from the east and the south. Later from the north the Soviets started shelling the centre of Berlin. Within 2 weeks of intense street to street fighting, the Red Army was in control of the centre of the Third Reich, and Adolf Hitler was dead by his own hand.​​

The German attack on Stalingrad began with intense aerial bombing which reduced much of the city to rubble and killed many civilians. The German advance was slow, however, and they were reduced to house-to-house fighting. By mid-November the Germans had pushed the Soviets back into a narrow corridor. Expecting an easy victory, the German general Friederich Paulus​​ paid insufficient attention to his flanks, and a Soviet counterattack was able to surround the German army. Hitler refused to allow his army to attempt to breakout. Heavy fighting continued for another two months, but it was a lost cause for the Nazis, and after their food ran out, they were forced to surrender to the Red Army.

Ichi-Go was a series of 3 battles fought between Imperial Japan and the Republic of China in 1944. The battles were the battle of Central Henan, the battle of Chengheng, and the battle of Guilin-Liuzhou. Japan’s objectives in the operation were to open a​​ land route to French Indochina (later Vietnam)​​ and​​ to capture airbases in South Eastern China from which the United States was launching bombing raids against the Japanese homeland. In eight months of intense fighting, Japan was broadly successful, but at the cost of 100,000 Japanese and 700,000 Chinese dead, as well as half-a-million Chinese civilians killed. Winning the battles had little benefit for Japan, as the US simply moved its airbases inland and intensified the bombing of the Japanese homeland.

More than 3 million men fought at the Somme over the summer and fall of 1916. One million of those were killed or wounded. It had started with optimism on the Allies side, the big push that would hasten the end of the war. For over a week the Allied artillery pounded the German lines to mud. So confident were the generals that such a monumental barrage had crippled the German war machine, that they blithely sent their soldiers out on foot into no-man’s land to take the German trenches. But the Germans had not been​​ annihilated, they had waited in their dug-outs for the barrage to stop, and then they resumed their defense. On the first day of the battle 60,000 Allied troops were mown down by German machine gun fire. The battle ground on for another​​ five months, and eventually the Germans suffered huge losses and the battle ended in a stalemate. Neither side gained any lasting benefit from such an appalling loss of life.

For 303 days, the German and French armies fought bitterly over the town of Verdun in the north-east of France, and particularly over the hills surrounding it. The army that held the hills held the region nearby. An initial German attack was successful, pushing the French back to defensive positions. However, the battle then became a race between the armies as to which could provide the most reinforcements. Little progress was made toward the German objectives as the armies became bogged down, and then lost troops to reinforce the armies fighting at the Somme. By December,​​ the French and the Germans ended up pretty much where they had started in February, and nearly a million men lay dead.