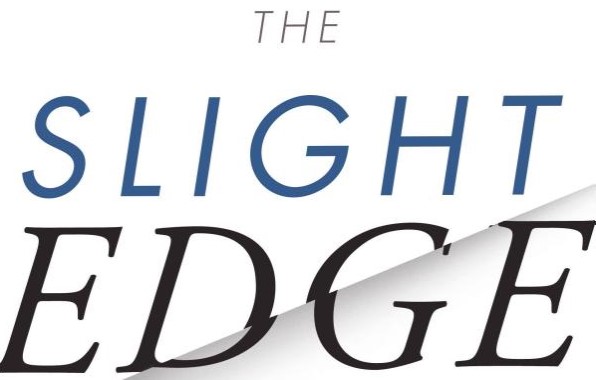 Tony Robbins once noted that as you get to the top of the mountain in any profession, the difference between the people that are extremely good and the people that are the very best is extremely small, yet the rewards for being “the best” is orders of magnitude higher than just being extremely good. One book I liked that focused on that concept was Jeff Olson’s “The Slight Edge: Turning Simple Disciplines into Massive Success and Happiness.” Enjoy the quotes:

10) Believing in the “ big break ” is worse than simply being futile. It’s actually dangerous because it can keep you from taking the actions you need to take to create the results you want.

7) Have you ever noticed that when you read stories about lottery winners, they are hardly ever bank presidents, successful entrepreneurs or corporate executives? That they never seem to be people who were already financially successful before they bought that winning ticket? Have you ever wondered why? It’s because successful people never win the lottery. Why not? Because they don’t buy lottery tickets.

6) Here is another application of Pareto’s Law: eighty percent of everything you do tends to get done in the last twenty percent of the time available!

5) You’ve no doubt heard the expression, “It’s the little things that count.” There could scarcely be a more succinct statement of the Slight Edge — and chances are, you’ve heard it said in the context of a relationship. The remembered birthdays, the little gifts, the gestures, the kind words, the remembered favorite color. The five minutes, snatched from an impossibly hectic day, to drop everything and hear the other’s news. The word of encouragement; the reminder of your own belief in the other person. The listening.

4) Show me where you fish and I’ll show you what you catch.

3) Each and every incomplete thing in your life or work exerts a draining force on you, sucking the energy of accomplishment and success out of you as surely as a vampire stealing your blood. Every incomplete promise, commitment, and agreement saps your strength, because it blocks your momentum, inhibits your ability to move forward, to progress and improve. Incomplete things keep calling you back to the past to take care of them.

2) In today’s world, everyone wants to go directly from plant to harvest. We plant the seed by joining the gym and then get frustrated when a few days go by and there’s no fitness harvest. Taking recreational drugs is an effort to go from plant directly to harvest. So is taking steroids to enhance athletic performance. So is robbing a bank; so is playing the lottery.

1) Successful people just do the things that seem to make no difference in the act of doing them and they do them over and over and over until the compound effect kicks in.