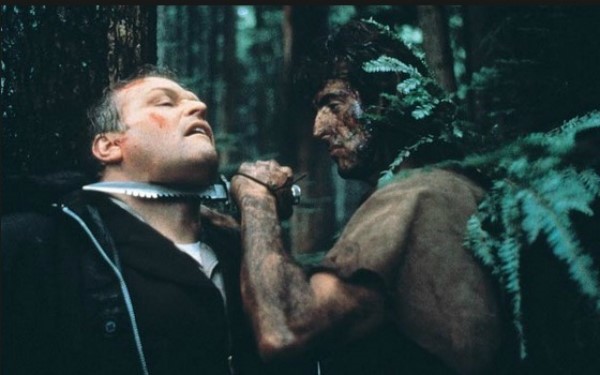 For whatever weird, strange, and slightly disturbing reason, we humans, being the odd creatures​​ we are, get a lot of​​ joy and satisfaction out of watching acts of ridiculously gory, bloody violence.​​

Back in the day, folks used to satisfy their craving for action by heading to the Colosseum to watch gladiators, the celebrities of their time, slaughter each other in rather gruesome, albeit, creative ways, cheering when the blood splattered across the dirt.​​

Nowadays, we civilized folk prefer to watch muscle-laden strong dudes execute endless droves of bad guys in spectacular fashion in a make-believe world, rather than the one we​​ inhabit. Hey, it's a way to satisfy that primal craving without actually hurting anyone, so I think everybody wins, don't you?

What's more awesome, more American, than seeing evil-doers meeting their maker at the end of a submachine gun, while the hero walks out of an exploding building in slow motion?

If you're feeling the itch for some good old-fashioned​​ shoot 'em up action, here's a list of the 10 best that will hit the spot.

Since we already talked about the ancient gladiatorial games, it seems fitting to kick the list off with one of director Ridley Scott's masterpieces, "Gladiator."

The movie stars Russell Crowe as Roman General Maximus whose family is murdered by the new Emperor -- played by Joaquin Phoenix -- and enslaved as a gladiator, forced to kill in order to survive. Maximus, being a highly trained soldier, hacks and slashes his way to glory and fame, winning the love and support of the crowds, as he works his way toward avenging the death of his family.​​

There's lots of fighting, great acting, stellar storytelling, and plenty of bloodshed, guaranteed to satisfy any fan of the​​ action genre.​​

While Bay may or may not have single-handedly destroyed the "Transformers" franchise in recent years, there was a time, long ago in a galaxy far, far away ( I believe it was called the 90's) the man was the go-to guy​​ for big budget Hollywood blockbusters.​​

One of his most popular films, "Bad Boys" helped to launch the film careers of Martin Lawrence and Will Smith, as the comedic duo turned action heroes played Miami drug detectives who essentially drive around in a super-hot​​ car blowing crap up. How can you NOT love that?

Back before Nicolas Cage became the butt of Internet memes and John Travolta was associated heavily with the nuttiness of Scientology, the pair starred opposite each other in what was to become a legendary action flick with a fresh concept and game changing effects for the time.​​

"Face/Off" was directed by John Woo, and centers around a cop who has a special and totally terrifying surgery to swap faces with a crime boss, with lots of awesome gun battles, plenty of slow-motion, and for some odd reason, doves.​​

Arnold Schwarzenegger is legen...wait for it….dary in the action genre and will make more than one entry on this list, guaranteed.​​

One of Arnie's classics that every single person on the planet has to watch at least once is the sci-fi tinged action thriller, "Predator."

The film has a stacked cast, featuring freaking Apollo Creed ( Carl Weathers) and the slightly insane Jesse "The Body" Ventura, alongside Schwarzenegger battling a vicious, dreadlocked alien who is walking casually through the jungle with a nuclear bomb strapped on him like a boss.​​

Almost too much awesome in one film. Almost.