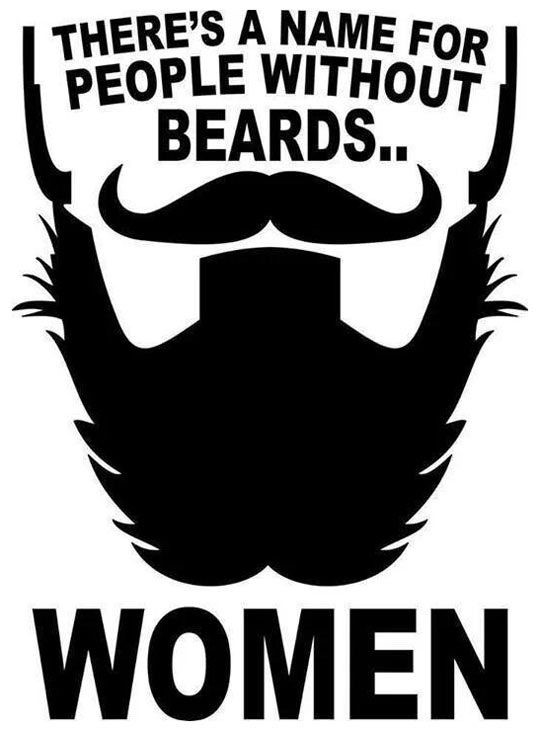 They say there’s a word for people without beards, women. And while that’s undeniably true, the manly fact is everyone has facial hair, male or female. But the facial follicles of real, biological men usually produce thicker, darker hairs than women.

Turns out this happens in REAL men because facial hair follicles respond aggressively to testosterone, the sex hormone that makes a man a manly man. This is why delusional women who think they’re men and take hormone meds often grow what can best be described as patchy ugly facial hairs.

But for the benefit of you real (biological) men reading this, there’s much more to growing facial hair than just abstaining from your morning shave. Your beard is your birthright and should be cared for with proper grooming and commitment.

WHAT IS A BEARD?

First, let’s be very clear, a beard is facial hair on your chin. While one could say a mustache and sideburns are indeed a part of your beard, if it’s not growing on your chin you do not have a beard. And while it’s not necessary to grow your mustache, if you’re not Amish or Abe Lincoln it is recommended. Otherwise, you just look like a weirdo.

WHAT TYPE OF BEARD IS BEST SUITED FOR YOU? 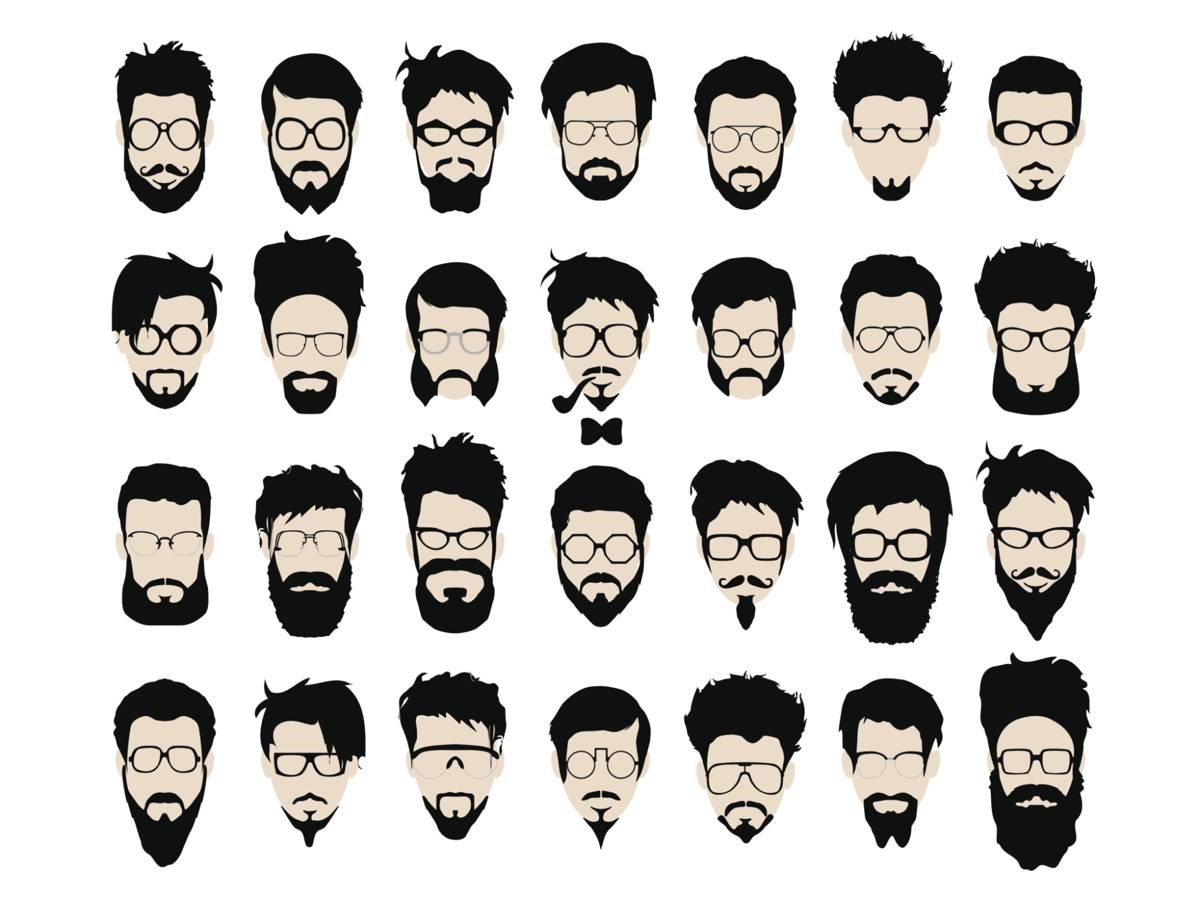 When deciding what kind of beard you want to grow you should keep three things in mind:

Just kidding, a real manly man would never have to get permission from a woman to grow a beard. And if she objects to your beard, it’s time to find another significant other. Period.

Here are just a few beard styles to consider. 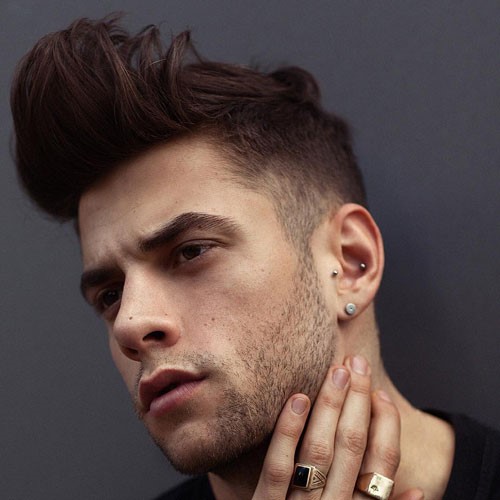 Also commonly known as a light to heavy stubble beard, the term scruff refers to just a couple days’ worth of growth. The stubble beard is a short style any guy can grow and wear and basically says you’re a very busy man and you’ve forgotten to shave for a day or two. This requires almost zero commitment and in reality, isn’t much of a beard at all. 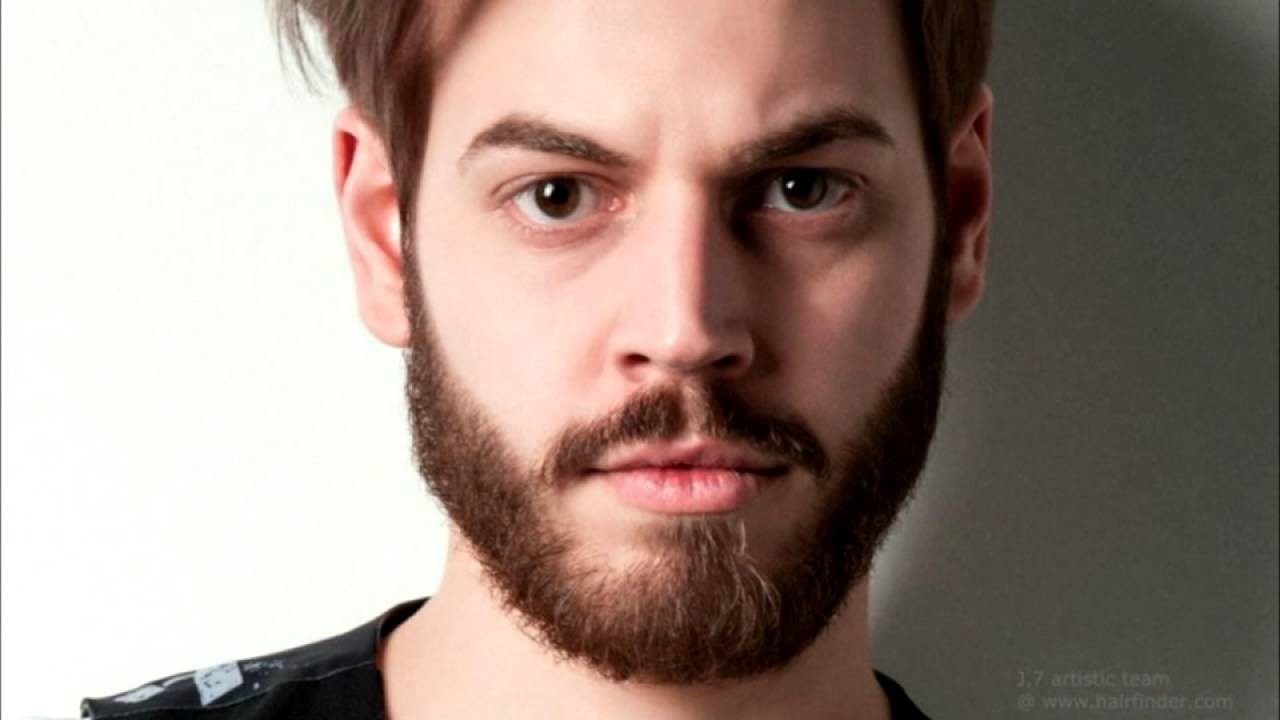 The short beard encompasses many different types of beards, but it’s typically described as one that is trimmed close to your face and no more than an inch long. This beard is good for a man who wishes to exhibit a manly look but that’s safe for almost all work levels. The short beard requires a low to moderate commitment but must be trimmed at least once or twice a month. They also require that you trim your neck and cheeks at least every other day. 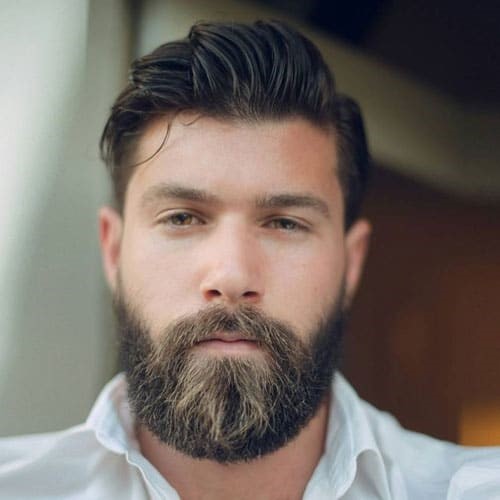 The full beard grows everywhere on your face, including your neck and cheeks, and comes in both short and long lengths. The full beard offers limitless styling and shaping options for maximum versatility. This beard style needs more commitment than its shorter brother, however, and requires less trimming. 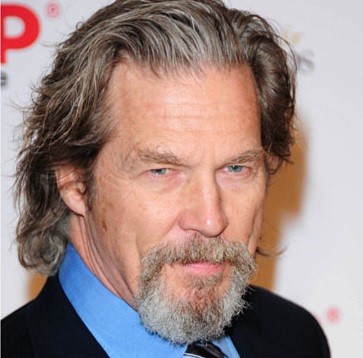 One of the more versatile beards, the goatee is whiskers on your chin only and is most commonly connected to your mustache but not always. In fact, sometimes a goatee is worn without any mustache at all, but this is not advised unless you’re a jazz musician. Otherwise, you risk being labeled as a trendy “Hipster” which no real manly man would ever want. The goatee can be worn long or short and can also be combined with other beard styles such as the scruffy or even the short beard style on your cheeks and neck. 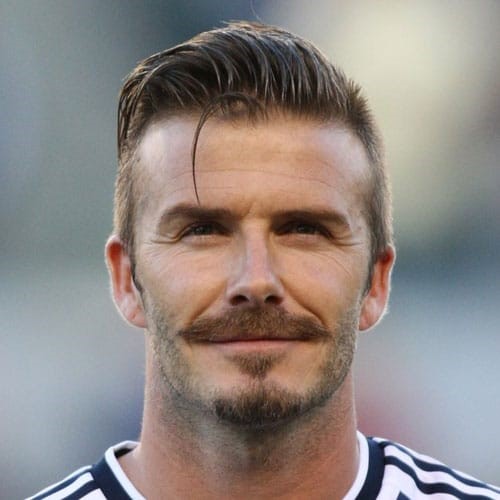 The Van Dyke is a variation of the goatee. The Van Dyke features a mustache and facial hair on the chin that becomes pointy. The mustache isn’t connected to the beard and can be shaped into a handlebar. The Van Dyke beard was among the coolest beard styles of the Old West and into the turn of the 20th Century. Unfortunately, you’re likely to find that many hipsters love the look and it was utterly ruined when Johnny Depp adopted it a few years back. The Van Dyke requires a high level of commitment as a result of proper grooming. 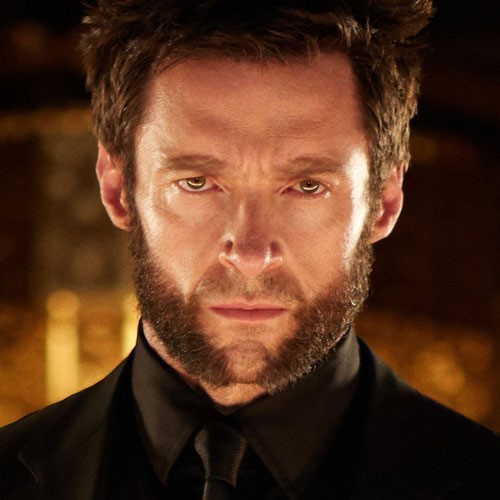 The mutton chops, also known as the Wolverine beard, while not technically a beard, is among the most iconic beard types (If that makes any sense). To better understand how the mutton chop style beard works, imagine growing a full beard from your ears down your cheeks to your chin, then shaving a tiny spot where a goatee would normally grow, essentially it’s like a reverse goatee. This means getting rid of a small patch of hair at the tip of your chin and above your lips where your mustache would be. 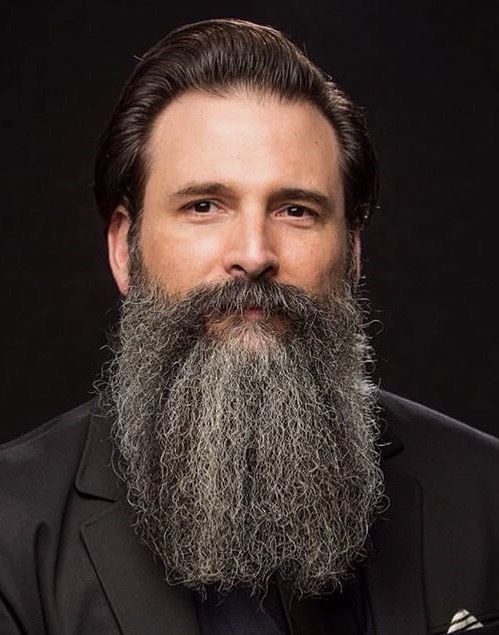 The big beard, the manliest of all beards is like the full beard but on steroids. Popular with bikers and mountain men it’s also called the ZZ Top beard or the Robertson (the Duck Dynasty guys) and requires a great deal of commitment.

The big beard is the result of allowing your beard to grow for a long while without a single major cut. Though you can get rid of split ends and flyaways as you see them, this beard requires uninterrupted growth and ideally, you should really not actually trim the beard for at least six months or longer.

As anyone who’s grown their hair out will attest there is an awkward point you’ll reach early on with a big beard where it just looks like crap, uneven growth and weird hairs sticking out all over the place. This is the point where you’ll be tempted to just trim it back and say, “I can’t grow a long beard.” Don’t be that guy, don’t chicken out. Remember, you’re a manly man who runs toward danger not away from it like the French.

Most men’s beard hair will grow straight in the early stages however they take on an “S” shaped pattern as they grow fuller and longer, this is most common on the sides just under your ears. This causes flyaways and hairs that may make you look unkempt and like some homeless guy. But that can be handled with oils and balms (which I’ll get into in another article) and if left alone will eventually straighten out as the weight of the hair pulls it down. Resist the temptation to trim them.

After 6 months everything will start to even out and you may decide to trim it and shape it or go with the natural look. Either way a big beard requires much more commitment than any other style and will certainly give you the satisfaction of displaying your FTW spirit of rugged individualism and unbridled manliness. 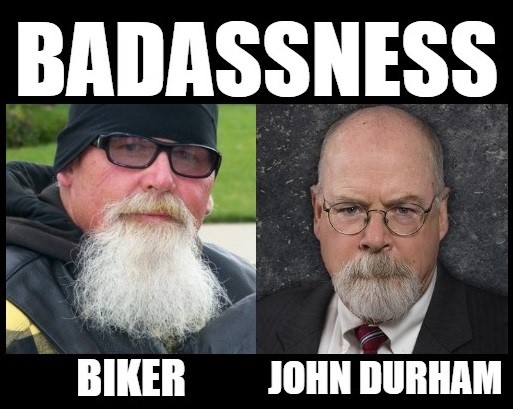 Some men will incorporate the big beard with the goatee, which requires shaving or trimming the cheeks and neck while leaving the chin whiskers and mustache to grow. This style when added to a shaved head will give you a truly high level of ultra-badassness. That’s why it’s very popular with bikers and John Durham. 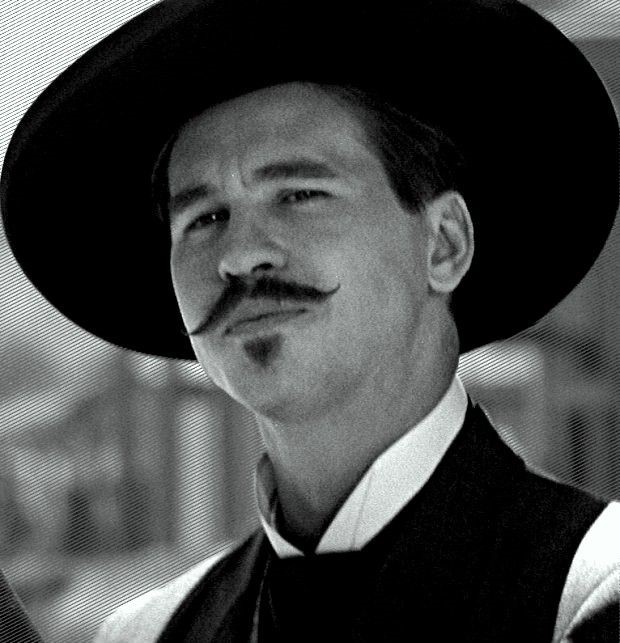 Finally, there’s the poet’s patch. This one’s simple, it’s not a beard, don’t do it, unless you also include a handlebar mustache like Val Kilmer as Doc Holliday in Tombstone. That was way cool.

Whichever style you choose, remember this, it’s your birthright as a manly man to grow your facial hair however you wish. It’s what sets us apart from the hundreds of other lesser “genders” out there running around stirring up a stink. And for God’s sake don’t let your wife or girlfriend pussywhip you into not flying your freaky facial hair flag. Just tell her that if she really loves you she would want you to be happy. That should shut her up for a while.

In my next article, I’ll attempt to cover the care and feeding of your beard with advice on beard oils and balms as well as other tips on grooming.

Until then, stay manly.

With a voice that’s been described as sounding like a pair of work boots walking down a gravel road, Jaz McKay is an unashamed, rock-ribbed conservative American patriot with a populist message often delivered with his dry, sarcastic sense of humor, bringing his life experiences to his radio show every day. Proud to be politically incorrect he holds the distinction of being incarcerated in Facebook jail nine separate times in the span of one year.

After more than 40 years in broadcasting, Jaz has entertained listeners literally all over the world including stints in cities like New Orleans, Miami, Detroit and Cleveland and even turning around a station on the island of Guam to become an urban powerhouse in the South Pacific. Building audience numbers and station revenue unlike most of his contemporaries, Jaz has a simple philosophy, keep it real and always be unique.

Jaz has worked as a voice actor and appeared in over 40 animated films and TV productions as well as countless radio and television commercials. He’s also performed standup comedy and has fronted four rock and blues bands all over the country.

Jaz McKay is a staunch supporter of the 2nd Amendment and self-defense and his hobbies include shooting, collecting vintage toys, and writing poetry.