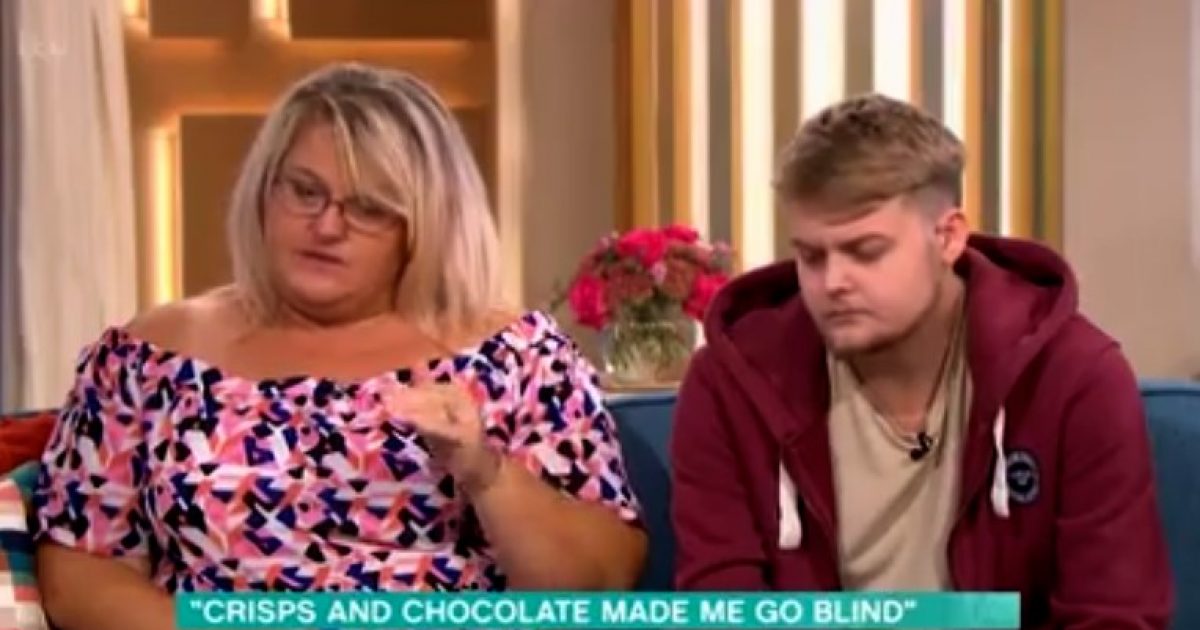 Obviously, right? How could anyone have known that his health problems were connected to eating not just pure garbage, but a very limited type of pure garbage?

The mother of a British teen who went legally blind after eating a diet of potato chips and french fries says she blames the U.K.’s health care system for her son’s illness.

Kerry James, whose son, Harvey Dyer, developed a rare form of malnutrition-based blindness in his early teens, made the comments on the U.K.’s ITV channel Tuesday morning.

Sitting next to her son, who is now 18, James said she is not a bad mom and that she “couldn’t have done any more” to help with her son’s condition.

“I’ve done everything,” James said. “I know people say it’s probably because I’m a bad mom and neglected him. I don’t listen to any of that.”

…”If they’d done the blood test then and realized [his] vitamin A was so low, they could have given him the vitamin A injections then,” James said.

James added that doctors gave Dyer nutrition shakes and other health products to try, but he refused to stick with them.

Dyer, who is considered completely blind in his left eye and mostly blind in his right eye, was the subject of a study in the American journal Annals of Internal Medicine earlier this month. In it, researchers detailed the teenager’s diet, which for years consisted almost entirely of Pringles, chocolate candy, french fries and fried, processed meats.

…”His diet was essentially a portion of chips from the local fish and chip [french fry] shop every day,” Dr. Denize Atan, one of the teen’s doctors, told the Telegraph. “He also used to snack on crisps [potato chips] — Pringles — and sometimes slices of white bread and occasional slices of ham, and not really any fruit and vegetables.”

Dyer’s symptoms began around age 14, and by 17 he was deemed legally blind in addition to suffering from hearing loss and weakness in his bones. His condition, called nutritional optic neuropathy, is almost nonexistent in developed countries such as the U.K.

As someone who consumes large numbers of books, videos and podcasts dealing with nutrition and longevity, I will fully admit that there is a lot we don’t know about how the human body works and that even listening to experts can leave you confused. As often as not when it comes to health, well informed, highly educated, very experienced expert #1 will just as often as not, tell you something completely different than well informed, highly educated, very experienced expert #2.

That being said, it doesn’t take an expert to know that if you live mostly off potato products and eat almost nothing else for years at a time, you are are going to have horrible nutritional deficiencies. So, although I get why this kid, who has some kind of eating disorder that makes him picky about his food, ate this garbage, I have to wonder why he wasn’t taking a vitamin? You can get those injected by the way. I even did that in Toronto on my last vacation. Moreover, they did give him nutritional snakes, which undoubtedly were loaded with vitamins, but he chose not to continue taking them. This mom and her kid played Russian Roulette with this health and unfortunately, he lost. So yes, she’s a bad mom and he’s an idiot — and let me tell you, there’s not a huge market for blind idiots. So, let’s hope he starts paying attention to his doctors and recovers instead of pointing the finger elsewhere for his own stupidity.