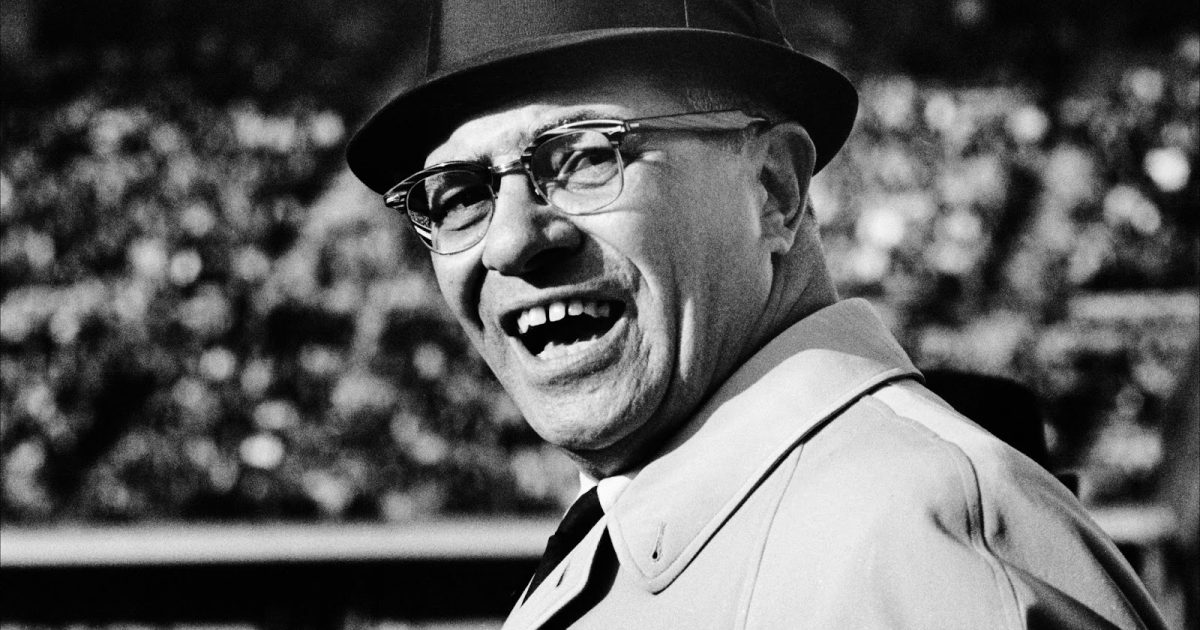 “People of mediocre ability sometimes achieve outstanding success because they don’t know when to quit. Most men succeed because they are determined to.” — George Allen

“The only correct actions are those that demand no explanation and no apology.” — Red Auerbach

“Don’t go to the grave with life unused.” — Bobby Bowden

“If I were playing third base and my mother were rounding third with the run that was going to beat us, I’d trip her. Oh, I’d pick her up and brush her off and say, ‘Sorry, Mom,’ but nobody beats me.” — Leo Durocher

“Win any way as long as you can get away with it. Nice guys finish last.” — Leo Durocher

“Luck? If the roof fell in and Diz (Dean) was sitting in the middle of the room, everybody else would be buried and a gumdrop would fall in his mouth.” — Leo Durocher

“The will to win is meaningless without the will to prepare!” — Joe Gibbs

“The man who complains about the way the ball bounces is likely the one who dropped it.” — Lou Holtz

“If you are bored with life, if you don’t get up every morning with a burning desire to do things – you don’t have enough goals.” — Lou Holtz

“Pressure is what you feel when you don’t know what’s going on.” — Chuck Knoll

“The truth is that many people set rules to keep from making decisions.” — Mike Krzyzewski

“You might reduce Lombardi’s coaching philosophy to a single sentence: In any game, you do the things you do best and you do them over and over and over.” — George Halas

“Leadership is getting someone to do what they don’t want to do, to achieve what they want to achieve.” — Tom Landry

“Setting a goal is not the main thing. It is deciding how you will go about achieving it and staying with that plan.” — Tom Landry

“The harder you work, the harder it is to surrender.” — Vince Lombardi

“All right mister, let me tell you that winning means you’re willing to go longer, work harder, give more than anyone else.” — Vince Lombardi

John Hawkins’s book 101 Things All Young Adults Should Know is filled with lessons that newly minted adults need in order to get the most out of life. Gleaned from a lifetime of trial, error, and writing it down, Hawkins provides advice everyone can benefit from in short, digestible chapters.

“The quality of a person’s life is in direct proportion to their commitment to excellence, regardless of their chosen field of endeavor.” — Vince Lombardi

“The difference between a successful person and others is not a lack of strength, not a lack of knowledge, but rather in a lack of will.” — Vince Lombardi

“Once you learn to quit, it becomes a habit.” — Vince Lombardi

“I firmly believe that any man’s finest hour, the greatest fulfillment of all that he holds dear, is the moment when he has worked his heart out in a good cause and lies exhausted on the field of battle-victorious.” — Vince Lombardi

“The only yardstick for success our society has is being a champion. No one remembers anything else.” — John Madden

“The road to Easy Street goes through the sewer.” — John Madden

“Success without honor is an unseasoned dish; it will satisfy your hunger, but it won’t taste good.” — Joe Paterno

“Excellence is the gradual result of always striving to do better.” — Pat Riley

“When you’re playing against a stacked deck, compete even harder. Show the world how much you’ll fight for the winner’s circle. If you do, someday the cellophane will crackle off a fresh pack, one that belongs to you, and the cards will be stacked in your favor.” — Pat Riley

“If you make every game a life and death proposition, you’re going to have problems. For one thing, you’ll be dead a lot.” — Dean Smith

“Being with a woman all night never hurt no professional baseball player. It’s staying up all night looking for a woman that does him in.” — Casey Stengel

“Yesterday is a cancelled check. Today is cash on the line. Tomorrow is a promissory note.” — Hank Stram

“You got a hundred more young kids than you have a place for on your club. Every one of them has had a going away party. They have been given the shaving kit and the fifty dollars. They kissed everybody and said, ‘See you in the majors in two years.’ You see these poor kids who shouldn’t be there in the first place. You write on the report card ‘4-4-4 and out.’ That’s the lowest rating in everything. Then you call ’em in and say, ‘It’s the consensus amoung us that we’re going to let you go back home.’ Some of them cry, some get mad, but none of them will leave until you answer them one question, ‘Skipper, what do you think?’ And you gotta look every one of those kids in the eye and kick their dreams in the ass and say no. If you say it mean enough, maybe they do themselves a favor and don’t waste years learning what you can see in a day. They don’t have what it takes to make the majors, just like I never had it.” — Earl Weaver

*** This was originally published at Right Wing News ***