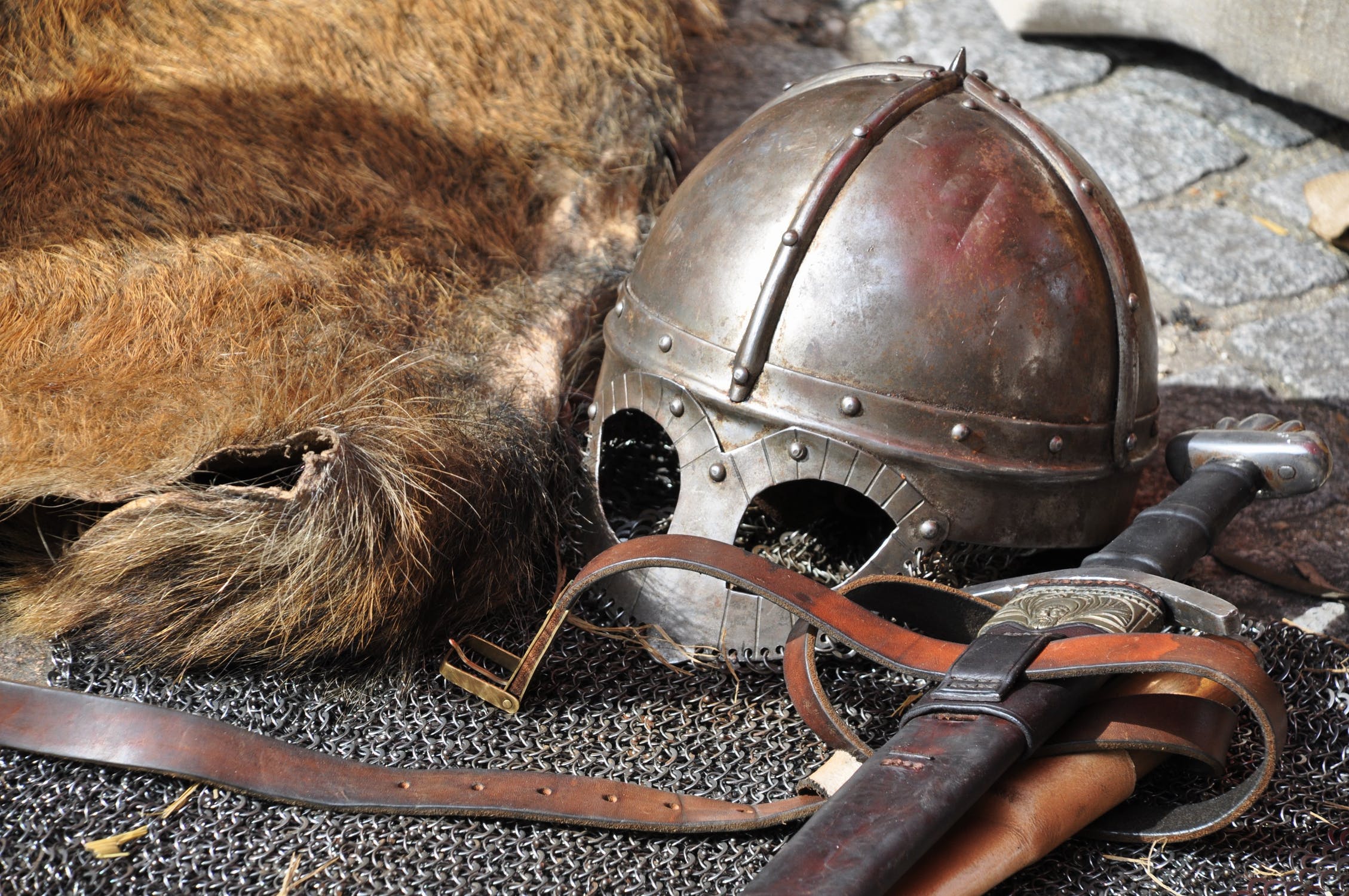 Most people think Marv is crazy, but I don’t believe that. I’m no shrink and I’m not saying I’ve got Marv all figured out or anything, but “crazy” just doesn’t explain him. Not to me. Sometimes I think he’s retarded, a big, brutal kid who never learned the ground rules about how people are supposed to act around each other. But that doesn’t have the right ring to it either. No, it’s more like there’s nothing wrong with Marv, nothing at all — except that he had the rotten luck of being born at the wrong time in history. He’d have been okay if he’d been born a couple of thousand years ago. He’d be right at home on some ancient battlefield, swinging an ax into somebody’s face. Or in a Roman Arena, taking a sword to other gladiators like him. They’d have tossed him girls like Nancy, back then. — Sin City

Ever watched a classic action flick? Of course, you have. Movies like Die Hard, Raiders of the Lost Ark, Lethal Weapon, First Blood, and 300 have become fixtures in the American psyche. All these movies feature either a lone man or a small group fighting in a desperate, violent struggle and yet, somehow, coming out on top. Throughout most of America’s history, the average man could more easily relate to the experiences in those movies the way someone who shoots hoops at the park could relate to watching an NBA game. Sure, they might not have been able to do what they were seeing on the screen, but they were well-acquainted with violence. Either they had inflicted it, suffered it, or seen it up close and personal. We’re a nation that was birthed in a bloody revolution, where feuds and dueling were frequent occurrences, where intermittent battles with Indians occurred until the twenties, where roughly twenty percent of the male population served in WWII, and where fistfights and brawling were relatively common.

The average man may have seen hundreds of thousands of murders on his TV screen and committed tens of thousands more playing video games, but he has also probably never struck another human being in anger in his entire adult lifetime. In other words, he may be captivated by the imagery he sees at the movies, but he goes home knowing that he will never even live out a pale imitation of what he’s just seen.

This same experience is repeated in a myriad of different ways in modern life.

To many men, examples of “manly” activities might include shooting a bow, repairing a car, skinning a fish, climbing a mountain, surviving alone in the woods, building a cabin from scratch, or hunting, killing, and skinning an animal. However, most men didn’t take up these activities to be “manly”; they did them because they were necessities and those who were good at them thrived and were admired by other men. What are those same “manly” activities today? In large part, they’ve never been replaced.

So what do most men do today to express those manly impulses? Sure, there are a few firemen, police officers, soldiers, UFC fighters, etc. who still live that throwback masculine lifestyle, but they’re little more than a tiny sliver of the population today. But what about the rest of the male population? Some of us take martial arts classes or go to the firing range, which is fine as far as it goes, but it’s often like practicing for a game you’ll never play. Chances are, you’ll probably go your whole life without shooting anyone or having to defend yourself from a thug trying to beat you to death on the street. Lifting weights may make you bigger and stronger, but again, will we ever use it in a sport? No. So what’s left? Hitting home runs in sports we’ll never play and killing enemies we’ll never fight in video games? For many men, that’s it. They watch movies, they play video games, but they’ll never fulfill the impulses that made those things attractive in the first place.

But the biggest changes have occurred in the nexus between economics and relationships.

For most of American history, an uneducated but hardworking man could get a job that would support him, his wife, and a family. He might not be rich or have the best of the best, but he could get by. Since few women were educated or able to earn a good living, their surest path to success was to find a man who could provide for them. This led to an implicit arrangement: The woman stayed home, took care of the kids and the house, and treated the man as the king of the castle. In return, he was expected to work as much as necessary to provide for his family.

“The arrangement” has been shattered beyond repair in recent decades by a number of factors.

For one, as America has become more prosperous and wages have risen, international shipping has become more practical, and technology has advanced, many low-skill, high-paying jobs have either been replaced by technology or gone overseas. This means that a hard-working but unskilled and uneducated man who could have once supported a family can often now barely support himself.

Additionally, as educational and job opportunities for women became prevalent, suddenly most women found that they didn’t “need” to marry a man or even stay married to support themselves. In fact, if worse comes to worst, the government steps into the role as the father and provides welfare, food stamps, school lunches, and so many other benefits. Indeed, in some cases today “a single mom is better off with a $29,000 job and welfare than taking a $69,000 job.“

What this means is that there are tens of millions of men who would have been desirable mates with good jobs whose value as men on the dating market has dropped precipitously. They’re no longer as valued; so if they get married, they’re not going to be the “king of the castle” they would have been 50 years ago. Moreover, divorce is now very common and the system is heavily slanted against men. The woman is much more likely to get custody of the kids, while the father is also likely to be hit with punitive child support payments, even if his former wife is doing better financially. While improved economic status has made a potential divorce much more attractive for women in bad marriages, it has paradoxically made marriage a much less attractive option for men overall.

Given all of that, are these numbers a surprise?

Barely half of all adults in the United States—a record low—are currently married, and the median age at first marriage has never been higher for brides (26.5 years) and grooms (28.7), according to a new Pew Research Center analysis of U.S. Census data.

In 1960, 72% of all adults ages 18 and older were married; today just 51% are. If current trends continue, the share of adults who are currently married will drop to below half within a few years.

We’re in a world where women, masculinity, and relationships have gone through a revolutionary change, but in many ways, men haven’t caught up.

Men are told women are just as capable and equal to them in every respect, except when it works out better for women not to be. We say that a woman can do anything a man can do, but then we have to lower the standards so women can qualify as firefighters or soldiers. We’re told women are just as good as men in the office, but then hear complaints that it’s unfair for women to fall behind in pursuing promotions because they take more time off than men to be with their kids. Men are chided for treating women as fragile little flowers, but then we take it seriously when women ask for hundreds of thousands of dollars because some man had a pinup calendar at his desk. We’re told that women want to be valued for their brains, but on our cable news shows, men need to have either enormous audiences or incredible accomplishments to be given the same opportunity that women get for being attractive.

A man who makes $20,000 a year still feels pressured to pick up the check on a date for a woman who makes $80,000, that is, if she’ll go out with him in the first place since he makes less money than her. Meanwhile, men who behave in a chivalrous fashion to women may find their behavior appreciated or denigrated, depending on the woman they’re opening a door or pulling out a chair for. Once women had low expectations of men: pay the bills, take care of the family, be nice. Now, women have much higher expectations but, from the man’s perspective, offer considerably less in return than in past generations.

Meanwhile, men are told that they have been given every advantage over women, just by virtue of their gender. Men are taught not to complain about such things. So they don’t, but most of them secretly think the idea that they’ve won life’s lottery by being born male is insane. Many men simply persevere and try to make the best of a bad situation. Others become bitter, angry, and misogynistic. Some men give up on long-term relationships and treat women as sexual conquests.

However, many men have simply abandoned the old views of masculinity and adapted. Instead of competing, why not drop out of the rat race? If the crushing responsibility of providing for a wife and children isn’t going to be valued, why not get a job that’s just good enough to get by, play video games, and slack off? If women don’t appreciate chivalry, why bother? If you can’t be the action hero on the big screen that everyone wants to emulate, why try to be tough or resourceful? Even if you don’t ever get married, if you have an easy life while getting laid now and again, isn’t that a pretty comfortable existence?

Unfortunately, men are shaped by a lifetime of experience. The guy who’s living in his parent’s basement at 30 isn’t ready to run a small business. The wimp who feels uncomfortable asserting his authority isn’t ready to be a good dad. The dude who hasn’t ever cared enough to make a relationship work isn’t ready to be a good husband. Mentally, these are still boys, not men — and our society helped make them that way.