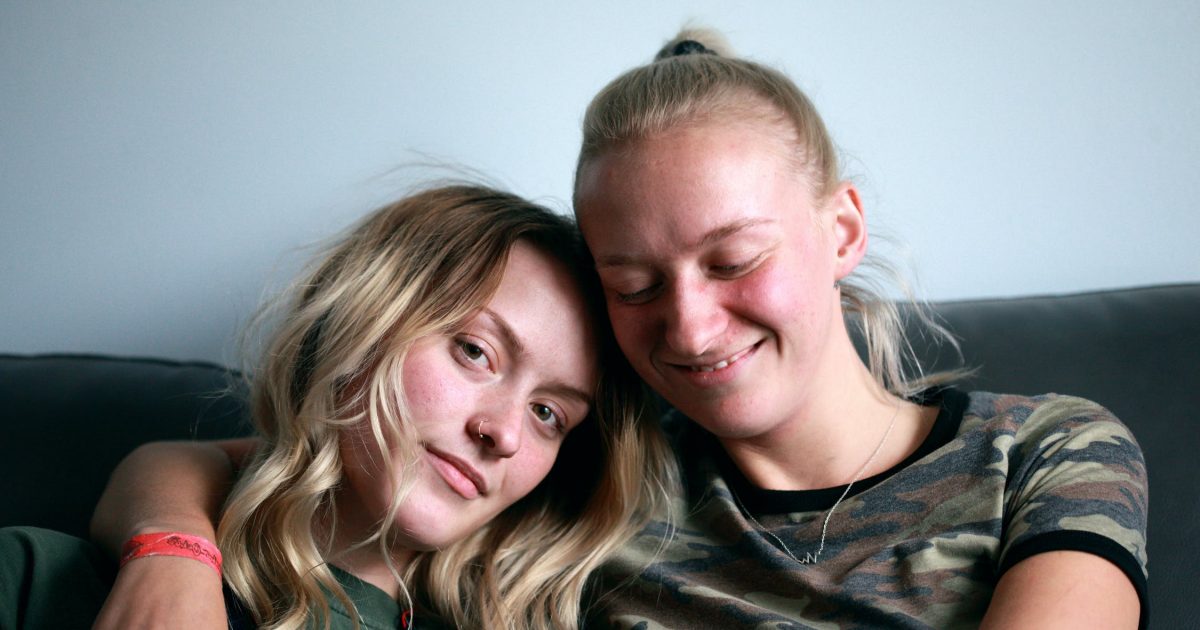 You have to feel bad for this guy,

Katie and I had been dating for two years and decided that we were going to move in together. We were “facebook” official, had traveled together, met each other’s families and even talked about a future together. Great, right? Wrong. As we signed a lease for an apartment (which I paid first/last, rather my parents gave me the money), things started getting weird. She kept accusing me of being gay (jokingly). She started talking weird during sex and requesting things that were out of the norm. She began to be distant but kept pulling me in, telling me she needed me, loved me. Then it came to a head: We were talking and she said how we were the “best of friends” and was happy to be moving in with her “bestie.” I joked and said “we’re so much more than that” and she said “no.” She tells me that this has always been a “friendship” and we needed to remember that – 2 months before we move into an apartment together. I got confused and she pretended like the last two years were a “friends with benefits” package and we were moving in together to save costs. Then she just blurts out: “oh, it’s because I’m gay that you were confused.” I felt like it was a practical joke and I was just misinterpreting things. We fought for two days straight and the crux of it was this: I was crazy. She was on-point and I was now not who she thought I was: Apparently, I am a misogynistic, homophobic assclown.

After we concluded fighting, she wanted to plan moving in together – the apartment has a living room, dining room, kitchen, bedroom and balcony – with the understanding that we’re still going to be sleeping in the same room. I grew even more confused: She’s gay but wants to sleep in the same bed? She wants to keep living together? I said “no way” and told her no way and that I would speak to the landlord. She got furious and said this wasn’t fair and I was welching on our commitment and I was being unreasonable. She also “opened up” about her sexuality on all her social media channels and suddenly was flooded with messages and comments. She began telling friends (offline) that I had dumped her and wouldn’t let her live in the apartment. They began to message me and say that I was ruining her coming out and that this was a huge travesty and she is living true to herself and I was making everything “about me.” Her gay friends have reached out and said how shitty the situation is and NOT to move in with her. I receive 2-3 messages a day still and I am at my breaking point.

I’ve had 72 hours to process all this. My relationship has fallen apart. My friends are mad at me, I have no idea what to say to anyone and I don’t even know how to tell my parents. I have nowhere to turn. I really need advice on navigating this and to sort this crap out. I feel bad about myself but I also feel like I’ve been jerked around. Help!

TL;DR Ex-girlfriend came out and thinks we should still move in. When I told her no, she got mad and her friends think I am being a bad friend during this difficult time for her. The only support I got was from her two gay friends who told me not to budge. I have no idea how to navigate this with a recently out ex-girlfriend who thinks our whole relationship was made-up in my mind.

#1) She sounds like she has some questions about her sexuality. She’s been “straight.” Now she’s “gay.” Two years from now, she may be straight, gay or bi. Who knows? People pretend like that doesn’t happen, but I’ve known multiple people on one side or the other of the same situation. I remember someone who was so upset because his girlfriend dumped him to start dating another woman. I knew a woman who went from exclusively dating women to exclusively dating men. I knew a woman who exclusively dated both men and women before deciding she was bi. I could go on and on.

#2) It’s not acceptable for her to pretend like the two of them were just friends with benefits and not really dating. That sort of gas-lighting is never okay.

#3) If she announced to the world that she’s gay and you’re her bf, why wouldn’t you dump her? Why wouldn’t you not want to live with her anymore? Who lives with someone he’s dumped? This part of it makes no sense.

#4) Screw her friends or even your friends that take her side. They don’t have to live with her after she pulled that crap. Her “coming out” doesn’t give her a free pass to treat him like garbage.

#5) I wish there were some way to salvage the situation and make everyone happy, but there’s not. He needs to cut her loose. He shouldn’t live with her, take any crap over it or feel like he failed somehow because she decided she’s gay. It doesn’t have anything to do with him. It’s just time for him to move on.