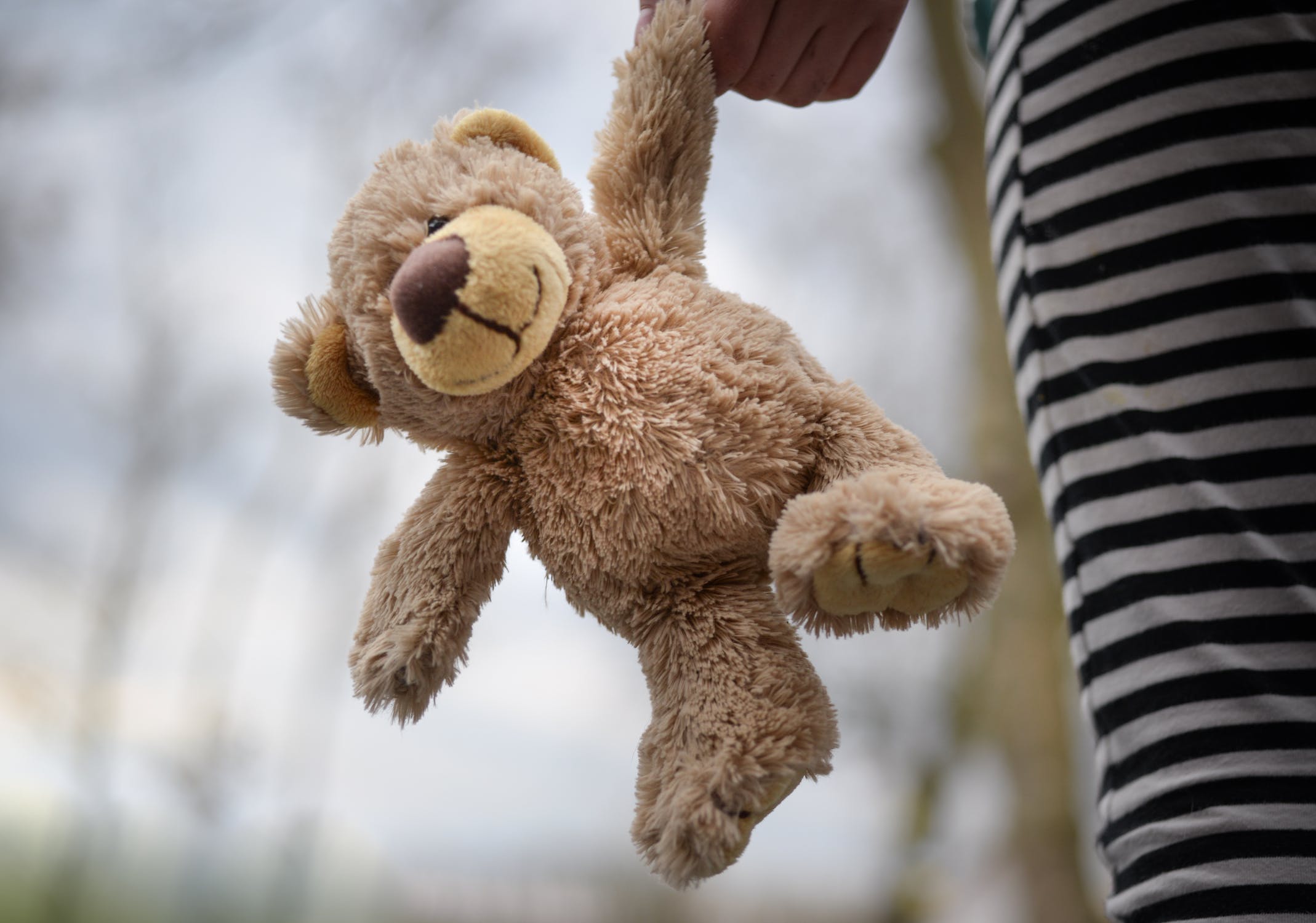 At first glance, I had trouble believing this was real. Except this isn’t the first thread I’ve seen about the topic and in the comments sections, were multiple adults saying that they did similar things. Prepare yourself, my friends, because it’s about to get weird:

I have been with my boyfriend for 3 months now, so it’s pretty new. So far everything is going well except this tiny little detail. He has this teddy bear, let’s name him Teddy. Teddy has always been a part of my boyfriend’s life : he got him for his birth and when at around the age of 5 or 6 (or whatever age is the appropriate age to remove a teddy bear from a child) his parents tried taking Teddy away from him, he screamt and cried so loud without stopping they ended up giving up. So he kept Teddy with him his whole life.

He mentionned Teddy to me pretty early, about a week after us being together. He showed me pictures of him and I found it cute at first. He had plenty of pictures of him in different situations (him with a mug, him laying in bed, him studying…). I truly found it adorable since I thought it was just a joke really and didn’t think that Teddy was such a big part of his life. The more we got to know eachother the more he started mentionning him. He’d often make jokes about him. When he had to come back to his flat, he’d say “I have to come back Teddy is waiting for me” and then later he’d text me “ok I put Teddy to bed so now I might go to sleep as well i don’t want to wake him up”. Again, a little weird but cute still. But he really started talking about him constantly, always linking what we were doing to him (“Oh I wish Teddy was with us to see that”, “Teddy doesn’t really like people so I won’t take him with me for this party” etc…) . He’d send me selfies with him at least twice a week.

He also sometimes said weird stuff like whenever we watched a sex scene in a movie he’d say “that’s what me and Teddy do when we’re alone” or when i asked when he lost his virginity he answered “oh I lost it with Teddy a few years ago”. They were jokes that made me uncomfortable. He always seemt to consider him as a baby/his son/his brother, so him being sexualised was extremely weird for me. I told him then that it was weird and he just laughed but I don’t think he took me seriously.

About a month ago, I told him I was okay with him bringing Teddy when he was staying around my flat. I could see it was making him sad to leave him, and also was very curious to finally see him in person (I can’t go to my boyfriend’s flat, there are rules that are strict, he can’t invite anyone). So that day I drove to his flat and he went with all his stuff and Teddy. When he got in the car he pulled him out from his bag and had him give me a kiss on the cheek. When we drove, he opened the window and put Teddy out of the car (a bit like a dog would). He said it was rare for Teddy to travel like that and he could feel that he was happy. Teddy smells a lot, my boyfriend hasn’t washed him in 12 YEARS. For the rest of the car drive, he hugged him and gave him kisses.

He has weird “twitch” where he just compulsively pats the back of Teddy (it makes a weird sound because Teddy used to be able to play music when you pressed his belly). He always rubs Teddy’s clothes inbetween his fingers (you can guess that Teddy is in a pretty bad state, he used to be red and now he’s just grey). When we’re together in bed, he always puts Teddy’s mouth on my mouth and I always avoid it as I find it disgusting (and I told him that I hate it but he doesn’t listen). He always tries to have Teddy touch my boobs or my arse. When we make love, I often end up finding him inbetween us and every time I throw him away my bf says “oh no he likes to watch” in a joking way. He often mentions us having a threesome with Teddy, him (Teddy) being great at licking, and them always doing kinky stuff together.

Now I’m not an idiot. I know communication is important. I tried talking to him so many times. Sometimes in a joking way too so he doesn’t feel attacked (like once, I asked who would he choose if he had to choose between me and Teddy, he said Teddy), but also so many times in a serious way (I told him I didn’t like when he was rubbing Teddy on my face and body, I told him I found his relationship with him way too intense and weird) but every time he didn’t take it seriously, made jokes, and never truly told me what he thought. I should mention that he is like that for any serious conversation, all he does is make awkward jokes and he never tells me how he feels (he said I love you first because he was drunk).

This is becoming hard to handle. I have been away from him for two weeks and was kind of relieved I wouldn’t see Teddy anymore, but all he did was send pictures, and whenever I asked him “what are you doing” or “what did you do today” is answer was “playing with Teddy”. Today he told me I was perfect, which was a first and I sure didn’t expect that (he doesn’t give a lot of compliment). When he said that I said “really ?” and his reply was “actually no, Teddy is perfect, you come way after him”. I just gave up and didn’t reply.

I have 3 questions. 1) Am I overreacting, am I the one not being tolerant enough, am I some boring girlfriend who can’t welcome some childishness in her couple ? 2) What should I do, should I let him live his life with Teddy, should I ask him to make a real choice, should I ask him to just stop the sexual jokes… Like, who am I to ask such things I don’t know ? Is it my place to tell him to stop being so weird with his teddy bear ? And 3) How do I get him to finally talk to me and take me seriously ?

I used to sleep with stuffed animals. In fact, I even remember my favorite one. It was a giant snake that I had named Herman. I don’t remember exactly what age I decided that having stuffed animals on my bed felt too babyish, but it was well before puberty.

You might say, “Sure, this is kind of childish, but what’s it hurting? If he wuvs his teddy bear, so what?”

First of all, rather obviously, it’s extremely immature. It’s hard to even imagine how a man can infantilize himself more than centering a big part of his life around a teddy bear. Other than literally wearing a diaper and only speaking to everyone in baby talk, it’s hard to imagine someone behaving more like a child.

Also, any adult that is this attached to a teddy bear is seriously damaged. In fact, it reminds me a little bit of episodes of Hoarders where the therapist would show one of them an old magazine or cracked doll’s head and say on a scale of “1 to 10, how much do you want this?” Then the hoarder would look at this worthless object, eyes wide and blurt out, “10!” People like that (and I suspect this guy as well) tend to get attached to objects because they have trouble having loving relationships with the people in their lives.

Then there are the sex jokes. As someone who loves to make outrageous jokes to a girlfriend, let me just note that this sounds like more than that. It sounds like someone who has a very strange, sexual attachment to a dirty teddy bear that he is feeling his girlfriend out on. Incidentally, that fetish/mental disorder is called, “Plushophilia.” Nothing good will come of searching for that term, by the way.

As to her 3 questions, the answer is the same to each one: “RUN!” followed up by, “Find yourself a boyfriend who likes you better than his stuffed animal.”

PS: There was a follow-up to this post and here was the conclusion of her last update, which was probably followed by her weird boyfriend breaking her arms and legs before sewing her inside of a life-sized bear costume:

What did you do in the end ? I was meant to see him today so I picked him up and we drove to my flat. Of course Teddy was there and when he came in the car, my bf had him give me kisses and stuff. I said stop please in a cold way and he stopped. I said we needed to talk and he listened because I started crying. I thought it would be hard for me to start talking but since I was so stressed with all your comments I just broke down and cried. I told him how I needed him to stop with Teddy, that he needed to stop being so close and dependant on him, that Teddy shouldn’t come to my flat anymore… At first he was silent but then he said he didn’t understand why I was so uncomfortable with it, that he was purely joking, that he knew Teddy wasn’t real and that it was hurting him to see that I thought he had a problem. I was extremely disappointed of his reaction and just told him I needed a break. I drove him back to his flat and that’s where I am now.

PS #2: I hope the break continued, she moved on and she is now living a happy, healthy life as opposed to being chained up in a bear suit in the basement of her boyfriend’s house.

PS #3: As an extra added bonus, here’s a thread featuring a guy upset his girlfriend wants him to get rid of his stuffed dog. Dude….DUDE!