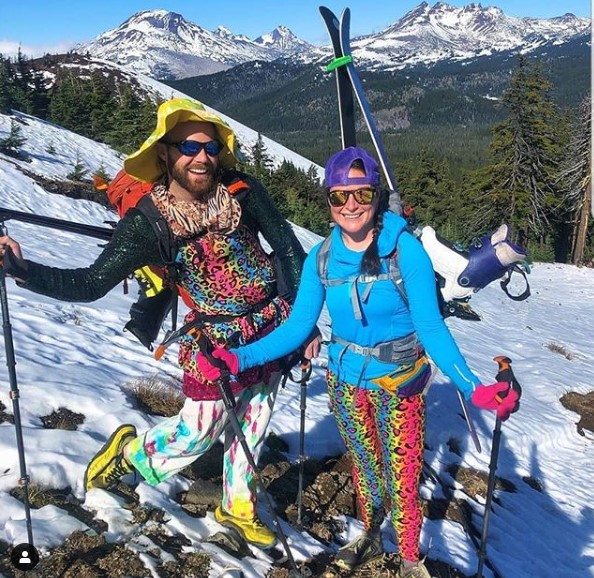 SJW’s and feminists always seem to be BAFFLED by human nature:

My gaze scanned the colorful racks of clothing and stopped abruptly on something I’d never expected to see: my boyfriend was clutching a wedding dress – that he wanted to buy for himself.

“Emily!” he cried with victorious glee. “I’ve found the one!”

Ian thrust the white garment into the air like a Nascar trophy. Its lace sleeves sashayed from the tapered bodice and fluffy tulle grazed the dirty tiles of the thrift store floor. A smile stretched across Ian’s scruffy face and his blue eyes danced with the giddy excitement of a bride saying, “I do!”

We were at Goodwill searching for dresses to wear during the annual Mother’s Day Climb up Mount St Helens, a decades-long tradition in which everyone scaling the volcano that day sports flowing garments in honor of female mountaineers and mothers everywhere.

…But I found myself unexpectedly uneasy with his new fondness for feminine frocks – a reaction that challenged the progressive ideals I’d prided myself on for decades. I’d long thought I was contributing to a progressive shift in how we define masculinity, finally allowing men to be emotional and vulnerable, or to ask for help, or to hug their male friends … or to wear dresses.

Ian giggled. “Isn’t it beautiful?” His chest hair battled the sheer neckline. The skirt fanned out as wide as a beach umbrella – a garment fit for a Vegas chapel.

…This was not the first time I’d found myself a little uncomfortable with the sight of Ian in women’s wear. It’s not an unusual sight to spot him sporting a skirt, dress, or sarong at a party, picnic, or trailhead. He uses his unconventional apparel as a display of his individuality and a reflection of his fondness for fun. I adore both of those qualities, but I was realizing I was less fond of seeing them exhibited through floral numbers or tight sequined garments or wedding dresses.

While it was attraction-at-first sight with Ian, his closet full of feminine gear put a tiny dent in his desirability from the very beginning of our relationship.

…My boyfriend’s wedding dress pushed me to perform a scrupulous inventory of my deepest ideas about masculinity and helped me identify my shortfalls as a woman who wants to help rewrite gender norms. As I went through this exercise, I chatted with a handful of girlfriends about it, who could all identify their own small hang-ups with masculinity: their need for men who are bigger and taller than they are, or who are better than them at sports, or who don’t cry in front of them.

As we interrogated our feelings about masculinity, we recognized gaps between our ideals and reality. I’m quick to blame men for perpetuating toxic behavior, but in this case, I, the woman, was part of the problem.

One of the biggest conceits of the Left is that you can rewrite human nature any way you please. Except this rarely works out in practice and to the limited extent that it APPEARS TO DO SO, there have to be some very sound reasons for it.

So, for example, if I am hungry and you have food, I may have a biological urge to pistol-whip you, put a bullet in your head when you’re down so you can’t possibly retaliate and then clean out your pantry, but society has put powerful restraints on this type of behavior. First and foremost, the church has taught me since I was young that this is morally wrong. Moreover, society agrees and will treat me like a pariah for doing this. On top of that, the state agrees and is willing to send lots of men with guns to put me in jail if I don’t die outright resisting them. When you replace these three powerful forces that merely MASK, not CHANGE human nature with a bunch of “shoulds” from some not particularly well-respected group like feminists, it doesn’t have much effect.

Put another way, when SJW conditioning runs up against human nature, human nature wins. So the guy doesn’t want to date a “woman” who used to be a man or who’s fat, no matter how many times “body positivity” experts say he should. Similarly, women don’t like feminine men or guys that are shorter than they are. ALMOST NO ONE likes people they don’t find to be attractive. All of this is instinctual and you can’t arbitrarily change it just because you want to feel more “woke.”

As David DeAngelo used to say, “attraction is not a choice.” Learn to love it because that’s how it is.