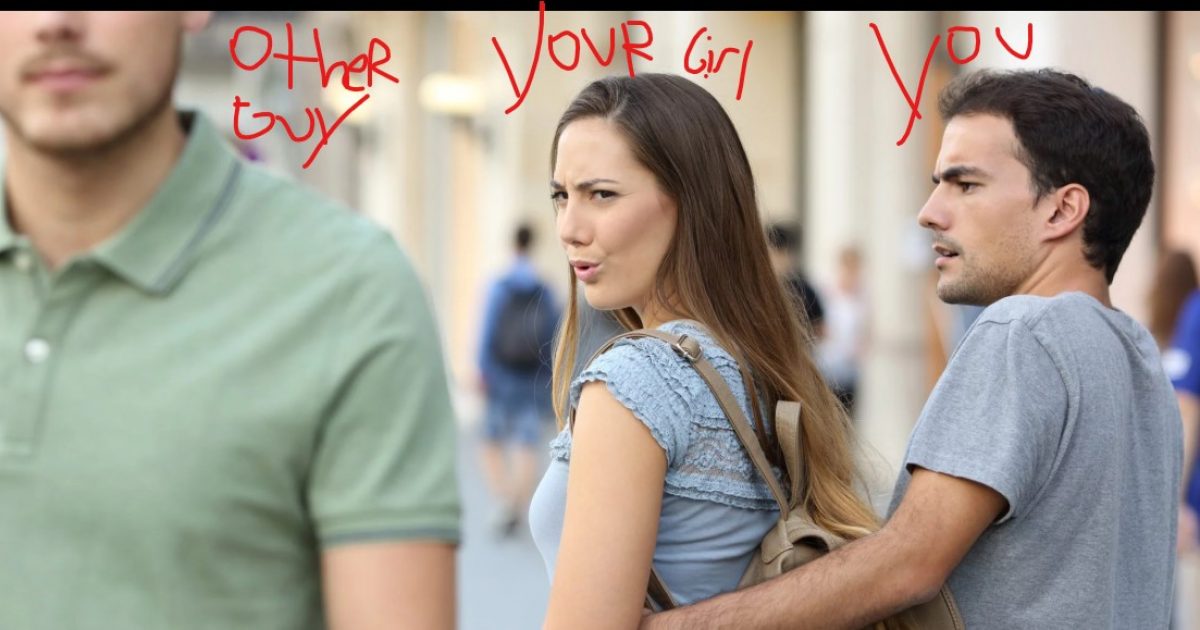 This is from r/relationships on Reddit and it’s an all too common story,

So yesterday I was out with my girlfriend and I noticed she was on Snapchat. she had an unopened snap from some other guy But wouldn’t open it while i was next her. I pretended to get up and walk away, but as she open her Snapchat I came back quickly and she closed it. I pretended to walk away again and she opened it again and began texting the guy but I stood there and stared at her so that when she went to look for me she understood that she had been caught When we locked eyes. At 1st I wanted to believe I was being paranoid and maybe she just didn’t want to seem like she was ignoring me to talk to someone else while I was near her but of course as my mind went on and on I began to get more fearful. I eventually asked her if I could see the conversation. She told me I may not like what he said to me and I replied I know guys flirt with women and I’m not worried if guys talk to you that way, what I’m more worried about is how you respond to the flirting. do you encourage it or do you have my back and squash it? So she let me read the conversation and It was exactly what I had feared. they’d been talking for about 3 months. he told her very clearly that he had a crush on her that he wanted to have sex with her and that he can’t stop thinking about her and she very clearly expressed that she would be open to having sex with him. not once in those text did she ever reject deny or tried to push him away which should be obvious considering there are talking for 3 months. I read all of the text I looked at all the time stamps I know exactly how often they talked how late they spoke to each other and when they were speaking to each other. She had claimed that some of the text she may while she was drunk but nowhere in those techs did she get up the next morning and tell this man that what she had said was a mistake. She claimed to not consider it cheating because according to her and nothing ever happened between them, But when I asked her how she would feel had she’s found the same thing on my phone she admitted she would consider it cheating so she was well aware what she was doing. She even had this person’s notifications hidden so that they wouldn’t show up on her phone and I wouldn’t wonder who she was texting. Some of these time stamps even appear at times for me and her were hanging out, She was texting This guy at times even when she was with me.

We have been seeing each other since March since that time we’ve grown considerably close, I’m also 24 and I’ve Had relationships since high School. But most of them did not end well usually ended up in heartbreak for me, but I’ve always learned from my past relationships. Due to this I’m at a point in my life where I consider settling down with someone and starting a family. So I have been looking at houses for us to move in together it was supposed to be a surprise for her because I know she had been hinting at it, But of course being the kind of guy am I would dismiss those hints to try and keep it a surprise.

At first, I thought this side guy MIGHT just be some beta orbiter she was stringing along for the attention, but once you see this line, it changes the game, “she very clearly expressed that she would be open to having sex with him.”

This would be a problem at any time, but we live in a culture where the courts are totally rigged against men when a marriage disintegrates. I’m not saying women don’t have anything to lose if they get married as well, but it’s orders of magnitude more of a risk for men. You can marry her; she can bang some guy on the side, divorce you and you can still end up paying out more in child support than you can afford while she shacks up with the guy she was cheating with. Incidentally, I’ve seen that very thing happen.

So maybe she wouldn’t have cheated with this guy. Maybe she just thought of this guy as a backup, in case things didn’t work out with her guy. Yet and still, if you’re a guy, you can’t afford to take that chance. If you can’t trust her completely, you shouldn’t marry her. By the way, in case you’re wondering, after some back and forth along with a little drama, he made the right call,

I told her from this point the relationship wasn’t worth salvaging, the amount of effort she would have to put in just to fix it Wouldn’t be anywhere near as easy as her just finding Someone else. She insisted That she still wanted to fix things that she still loved me and she didn’t know what she was thinking when she did all that , But my mind had been well made up…We sat in the car for a bit and she told me she’s willing to do whatever it takes to fix it…i told her the trust would never come back. I could never see her the same way or feel the same way i once did.”