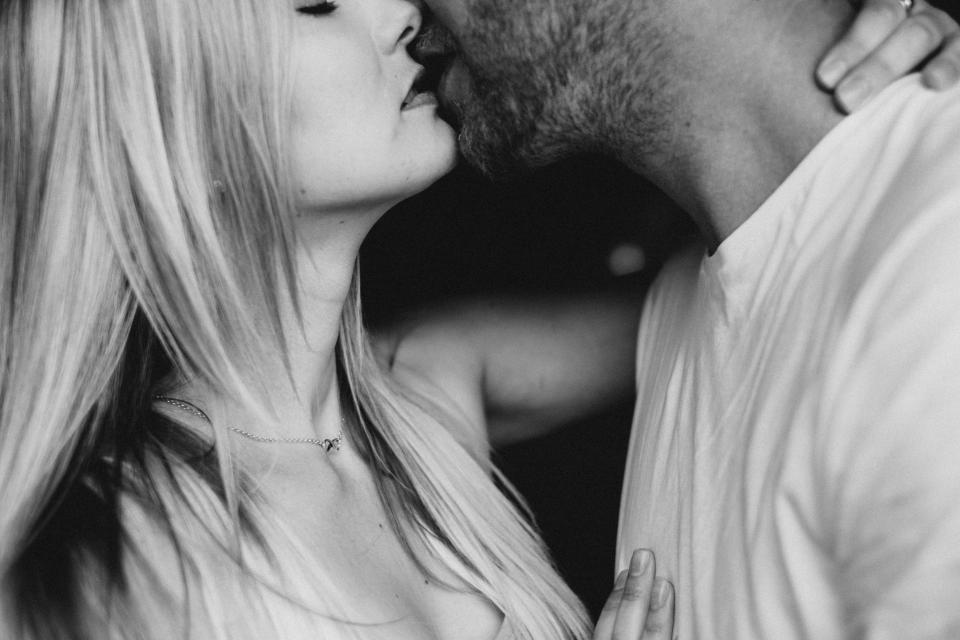 Generally, laughter during sex is not something most guys appreciate, but these stories are funny.

— A cop knocked on the window of the car we were in. He seemed more embarrassed than us. Turns out he’d been dating the girl I was with. Very awkward to say the least. I felt kinda shitty about that.

— As I was going down on my wife, the cat decided it would be a good time to climb and sit on top of my head. I tried to ignore it, but when she looked down she started laughing so hard that it killed the mood for the rest of the night.

— It was a lovely summer evening and my parents were out shopping. After calculating the time I have left I invited my girlfriend over. (we were 16 y.o at that time) After we started having sex on the couch, my parents suddenly came back and my naked GF jumped out of the window, straight to the garden. I couldn’t find a reasonable explanation for why am I naked, the window is open and plants which were on the windowsill are now on the floor. I’ve never been that embarrassed in my life.

— No joke, true story. I was seeing this really tiny girl about 13 years ago, shortly after my divorce. it was purely a D/s thing as she really liked being spanked, told what to do and so on, and we always finished with rough sex.

Anyway, she had lost her eye as an infant due to cancer in her tear duct and she had a glass eye, not very obvious unless you looked closely. Anyway, after one of our sessions, I had her bent over the bed and I was going at her doggy style, and all of a sudden, I see something fly over the bed and roll across the blanket. Without losing a beat, I calmly asked her if that was what I(eye) think that is. She says yes and I just keep going until I finish.

Afterwards we laughed and cleaned up and she says, well, now you can tell people you fucked some girl so hard you knocked her eye out.

— While my girlfriend at the time was giving me oral, she came up for a breath and proceded to sneeze, propelling her head forward straight into my groin. I was nearing completion and was already pretty sensitive so it hurt like you wouldn’t believe. She laughed her ass off as I cradled my gooch, and we couldn’t bring ourselves to finish. The night ended with us watching netflix as I held an icepack to my taint.

— Either first or second time I had sex with my ex, we’d literally just finished, as in I hadn’t even pulled out of her yet and her Mum walks in. We both freeze and I daren’t look because her Mum was a bit fierce and all I hear is ‘Oh, I thought you were just friends’ and then the door close again. My ex bursts out laughing and about five minutes later I hear her Mum on the phone telling her sister.

I know she’d finish because she’d kinda quietly buck her legs and be as still as possible and slowly arch her back…. And then say “okay I came thanks babe” and then it was time for bed for her.

— I was with a girl who liked to wrestle a bit and be held down, except she was a dancer with incredibly powerful legs and I underestimated her, and she accidentally kicked me in the chest and broke one of my ribs

— I tried to throw away the condom packet sexily by throwing it across the room. Misjudged the distance and accidentally gave her a scathing backhand across the face. She was unimpressed. Sex did not commence.

— When I first started dating my girlfriend I stepped on a bottle of lube spraying it all over her wall and then slipped on it, fell on the floor, then subsequently farted on impact. Two seconds later the Canada day fireworks went off in the harbour downtown.

True story. I wish I could make that my signature move.

— The first time my wife and I had sex (her first time ever), I stopped mid-stroke and said, “Sorry but I’ve been holding this for a long time,” and cut a full 5 second fart. We both laughed our asses off and she patted me on the ass and said to keep going. This is why you marry your best friend.

She punched me. Several times. I, however, was rolling with laughter the whole time.

— One time my roommate carded my locked bedroom door during a party. I was balls deep in my fwb doggy style and another friend was standing next to him, slammed the door shut, and then I heard him scream “my eyes” through the wall. Can’t remember if we finished or not.

Conservative Pundit Stumps Transgender Activists on ‘Dr. Phil’ with ‘What Is a Woman?’ Question
January 21st, 2022 Flag And Cross

YO PATRIOTS: Are You Buying The Story Of This Federal Investigation Into Rep Cuellar?
January 21st, 2022 Clash Daily