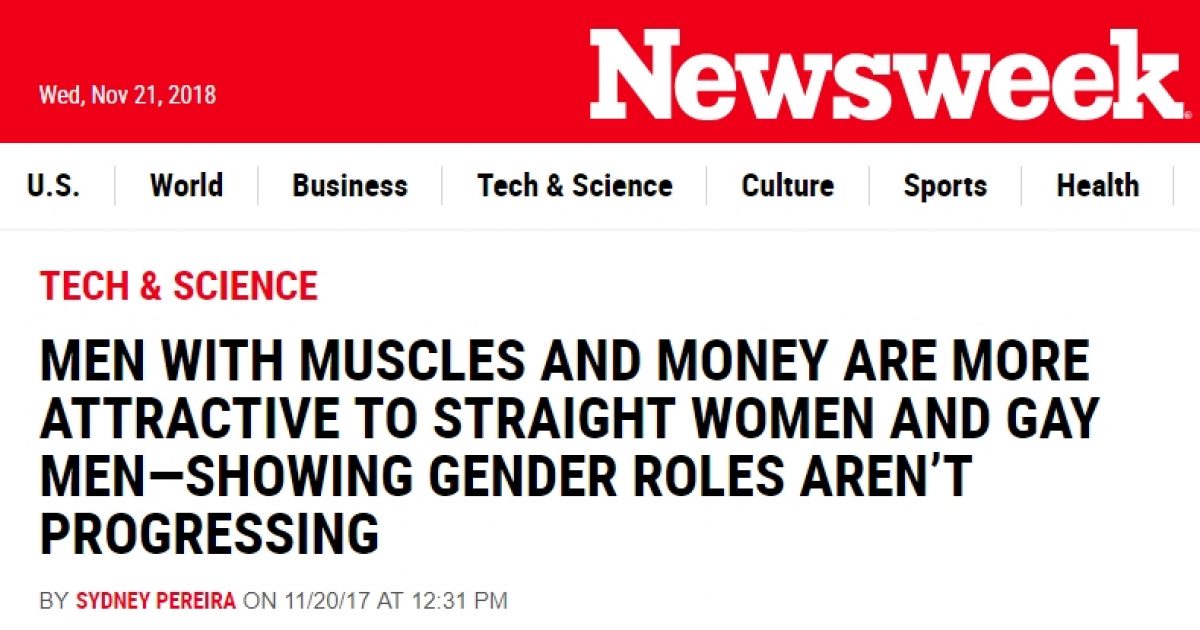 What exactly is it supposed to progress towards? Women chasing around gay men who only have eyes for other guys? Is the idea supposed to be that if straight women like gay men better than masculine men, then feminized, testosterone free dudes wearing man-buns and skirts will be in? There are so many questions created by the title and the article doesn’t answer them beyond these paragraphs,

The study at Coventry and Aberystwyth universities in the United Kingdom, published in Feminist Media Studies in August, analyzed images over a period of three years since 2014. The “guy candy” posted on the website were mostly white men—despite London being a multicultural city—indicating that white male privilege is still an attractive quality.

The photos and comments focused on the men’s biceps, pecs and chest as well as perceived sexual ability. Items that indicated wealth such as smart suits, watches and phones were emphasized. Pictures showing other representations of masculinity, such as fatherhood, and more emotional and awkward-appearing men were far less frequent.

“This celebration of masculine capital is achieved through humor and the knowing wink, but the outcome is a reaffirmation of men’s position in society,” lead author Adrienne Evans from the Coventry University’s Centre for Postdigital Cultures said in a statement. The problem, according to Evans, is that “although it appears as though we have moved forward, our desires are still mostly about money and strength.”

In other words, it’s just the standard, SJW feminist garbage that comes from them hating the world as it is and always has been.

“I hate men. I hate masculinity. I hate white men. Why couldn’t I have been one of the pretty girls? Blah, blah, blah, it’s so unfair, patriarchy, white privilege & I’m going to say dumb things until you pay attention to me!”