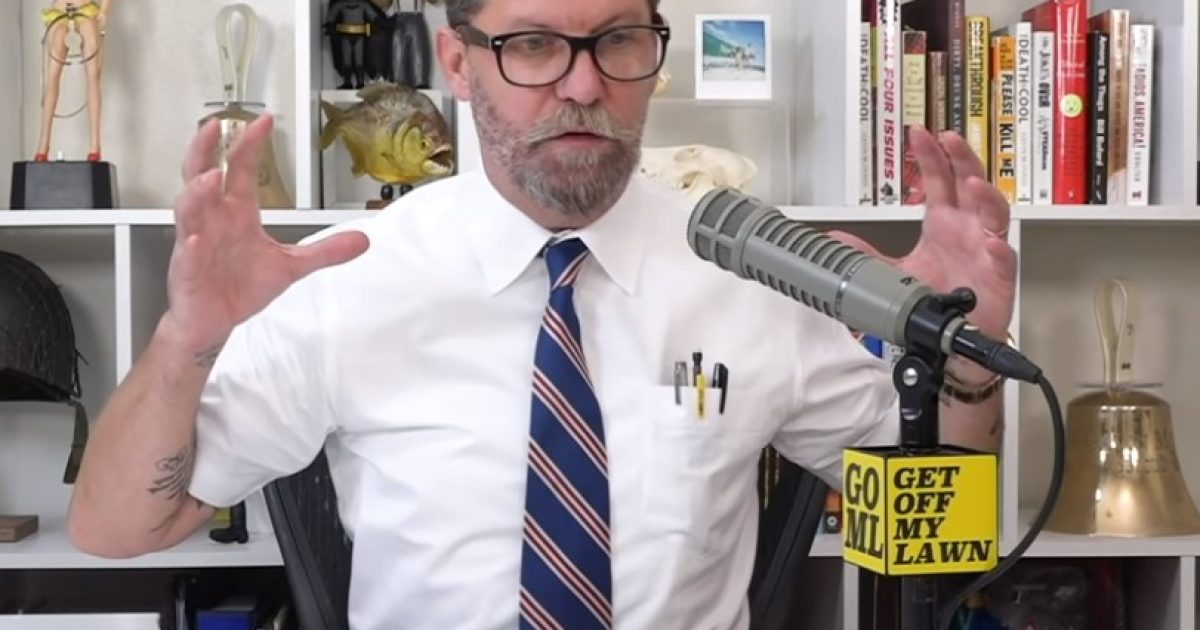 The latest Planet Hawkins Podcast is with Gavin McInnes. Although I have done some others I’ve really liked, this is my favorite one to date.

You may have seen Gavin on Fox News, heard about him about being deplatformed by various social media outlets or heard about the controversy over the group he founded, the Proud Boys. Gavin McInnes is suing the Southern Poverty Law Center for falsely claiming that the Proud Boys are a hate group. You can help fund that lawsuit, which is being handled by a top of the line first Amendment lawyer, Ron Coleman, at Defend Gavin. I put my money where my mouth was by chipping in $100 and I’d encourage you to do the same.

During the podcast, Gavin gave the best explanation of why feminism makes women unhappy that I have ever heard. It was so fantastic that I wanted to transcribe it. Here’s an edited version. Enjoy and then listen to the podcast.

Gavin McInnes: Are we allowed to swear on this show?

John Hawkins: Yeah, knock yourself out.

Gavin McInnes: Okay, I call them sh*t chests. You know how Iron Man has that glowing blue thing in his chest that keeps him alive? It’s a miraculous thing. It’s more than just an electronic device. It’s also biological. It’s an incredible thing. I’m not a super-hero guy by the way, I just think this is funny.

That’s sort of like this divine intervention that women have. They’ve been given this magical gift that allows them to give birth. So, a human comes out of them and soon, it’s walking around, talking, making them laugh, hugging them and when it’s 24, it’s having a glass of wine with them and talking about life. That thing that came out of you is having a glass of wine with you right now? And it bought you a sweater? What kind of magic wizard are you?

So they take this magic, they take the blue thing out of their chest and they replace it with feces. They go, “I’m just Iron Man without the blue thing.” So much revolves around that magical gift. You and I, we slowly get mad and then when we’re mad, we’re mad for about an hour and slowly get unmad. A woman can walk thought a plate glass window and then say, “Does anyone want a cup of tea?” That’s related to kids, too. Also, their perpetual optimism is related to kids, too. They see the good in everything. So, a little kid will show me a drawing of a lion that sucks and I’ll go, “That sucks, it looks like a dog with a mane.” A mom will see it and go, “I see what you’re doing there. That’s great!” So, it’s not just the giving birth thing. It’s an integral part of their entire existence and they poo-poo it like it’s nothing and that makes them miserable.

It’s sort of like Superman, if he was just Clark Kent. He’d be this bumbling, nerdy journalist, not really getting good scoops and getting abused by his editor and you’d go up to him and go, “Clark, you can fly so fast around the world that time goes backwards. Why are you focusing on this Daily Planet crap?” It’s like a wizard, if he just worked at a record store and didn’t do any spells. It’d be like, “Dude, you can turn people into a frog. Why are you selling vinyl?”

So, I think feminism has told women a lie and the truth is 95% of women will be happier at home using their magical gift, their iron man super power and 5%, I don’t think should have kids. We’ve told them the reverse. 95% need to have a career and if they want to have kids, they need to have them at 45 or 50 when they need to have $20,000 to try to turn back the ovarian clock. That makes them miserable. It’s cruel. It’s cruel to make Clark Kent focus on his crapwork at the Daily Planet.

…It’s important to convey because when you’re seen as sexist, you’re seen as someone who disrespects women. No, I disrespect women who have been told they’re men. Like all these movies where, as Nick Di Paolo says, “My suspension of disbelief can’t handle Angelina Jolie kicking the crap out of 6 Green Berets any more.” I’ve noticed this in bar fights. These women will put up their dukes and try to beat up the bouncer. I think they have been brainwashed by all of this crap. It’s like, “You are a sh*tty man.” So feminism has gone from saying, “Women should have the right to work and they should have the right to vote” and other reasonable things to now, “Women are men.” Women make sh*tty men. They’re not good at it. I’m sure a few lesbians are good mechanics, but telling every woman that she has to replace a transmission is sexist.

The other funny thing about it, too is turning women into sluts where they’re just booty calls and they never get married and they never have kids….they just get chewed up and spit out by all of these guys. Women in New York get used for booty calls. They get used on Tinder. They just get tossed away like human garbage and you think, “Congratulations. Your empowerment suits the worst men have to offer. It suits the most disgusting, lazy perverts around.” In my version of events, you’re happy, you’re married, you’re taken care of.