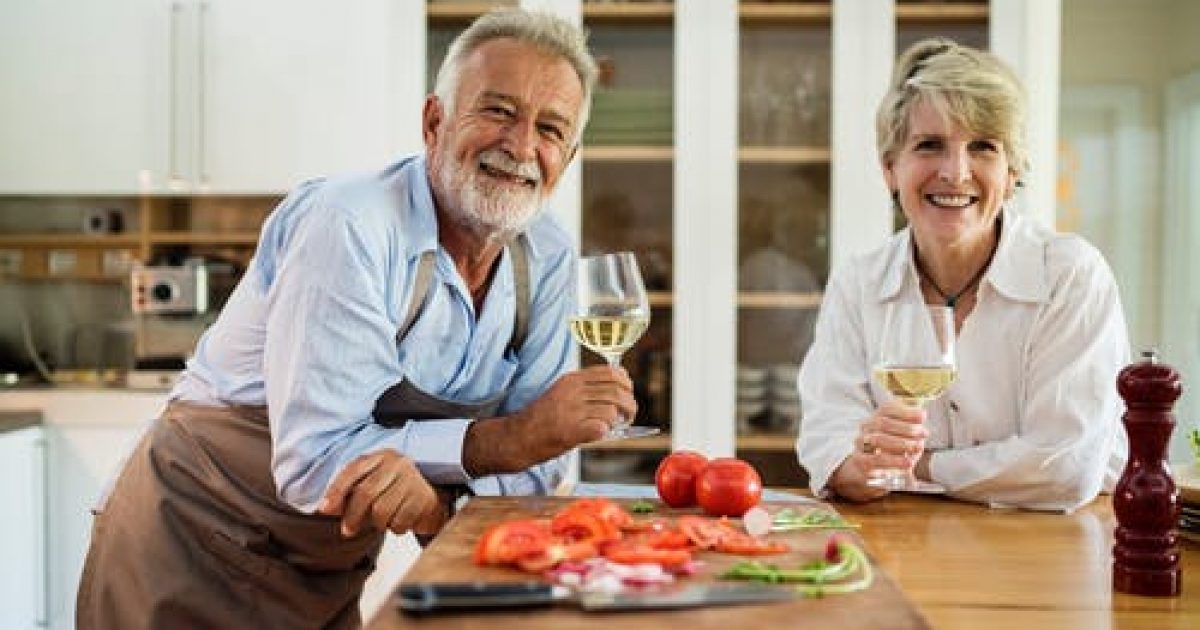 One of the intriguing features of 2019 is finding out that someone is outraged by something and then trying to guess why before reading their tortured explanation. For example, you could have done that when Nike CEO (He might as well be, right?) Colin Kaepernick vetoed Betsy Ross sneakers with her original American flag on them because they were racist or mean or something. Who really knows at this point?

However, the ‘My Girlfriend Isn’t Hungry’ Menu Trend is fairly obscure to begin with. In fact, the first time I had even heard of it was when I put this up on the Brass Pills Facebook page a few days ago. 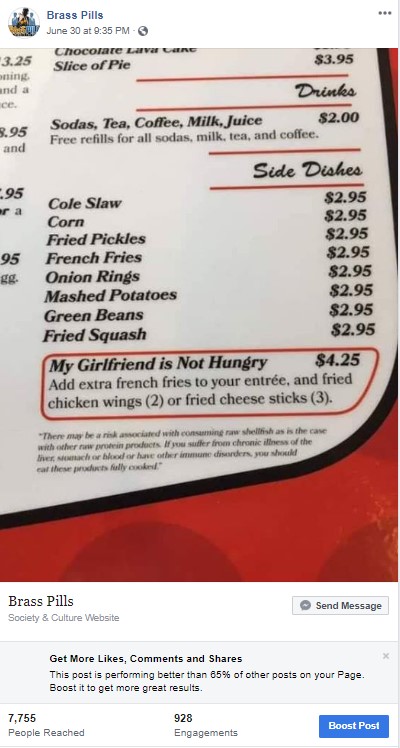 It’s a cute idea though, right? Because this is a real thing. You have women who are either desperately trying to stay thin or at least trying to give you that impression, not ordering any food. You then order the amount of food you actually want and then she starts going to town on your dish and it’s like, “Why didn’t you order anything?”

So apparently, there is some feminist named Jaya Saxena who is 10-out-of-10 upset over this because….well, I’ve read her piece twice and I’m still not totally sure. In any case, her rage over this terrible injustice is spilling out everywhere in this article entitled, “Screw This Whole ‘My Girlfriend Isn’t Hungry’ Menu Trend.” Incidentally, it’s subtitled “Women be daring to  ask for food.” So, we’re not even into the article and it’s obvious that this is not a particularly talented writer. Okay, let’s get on to the incoherent rage,

Mama D’s in Little Rock, Arkansas is the latest restaurant to go viral for the menu addition. The $4.25 “My Girlfriend Is Not Hungry” special gives you the option of adding extra fries, wings, or cheese sticks to your already existing meal. In another light, it would be a lovely way to offer couples a way to split food on the cheap, but it’s framed as a burden a man on a date must endure for… sex later? The ability to joke about her appetite on social media?

…Let’s start with the acknowledgment that it’s not a crime to just want three onion rings sometimes. The idea that your girlfriend is intentionally lying to you about how much fried food she wants (because these menu items are never an extra order of green beans) is based in the men-are-from-Mars-and-Venus-is-complicated idea that women are always being coy about what they “really” mean, and it’s a man’s job to decipher it. At its most benevolent, it causes men to roll their eyes when women snag bites of their dessert. At its worst, it gives men cover for their misdeeds under the guise that she was secretly “asking for it.”

…But aside from the misogyny (well, more like along with it), there are many reasons why anyone might snag some fries without ordering her own. Maybe she can’t afford, or understands her partner can’t afford, two full orders of fries and is trying to be nice about it. … Or maybe she thought she was on a date with a generous, trusting person who wouldn’t turn her appetite back on her. How dare she make that mistake.

…If you really can’t spare them, you can always say no if she asks! But the option exists to actually have a conversation with your significant other and express your needs and boundaries instead of snarkily complaining about how women be eating. It’s better than making your girlfriend feel like crap for thinking her boyfriend would be willing to share with her.

As you read this, you have to wonder if she had some kind of traumatic date experience related to this. You know.

Jaya Saxena: Sweetie, can I have some of your fries?

Boyfriend: Why do you always do this, you evil, lying whore!

I know, it’s over-the-top, especially that people are delicate and easily traumatized today that they probably talk with their therapist every time they’re mildly rebuked. So, it was probably something more like,

Jaya Saxena: Sweetie, can I have some of your fries?

Boyfriend: Why didn’t you order anything if you wanted food? You always do this.

Jaya Saxena (Starts sobbing): I can’t be in a relationship where I experience this kind of horrible abuse. I’m sorry, Claxton, but our relationship is over.

(The women in her feminist chat group later that night): You were right to do it. Next thing you know, he would have been beating you. It’s all part of the rape culture created by the patriarchy and….

Next thing you know, she’s writing about the horrors of “My girlfriend isn’t hungry” menus. It’s a sad story, but one with a moral. Ladies, if you want some food, order it or you’ll end up as a crazy feminist and then you can have all the fries you want, but you will be sharing them with your 14 cats.