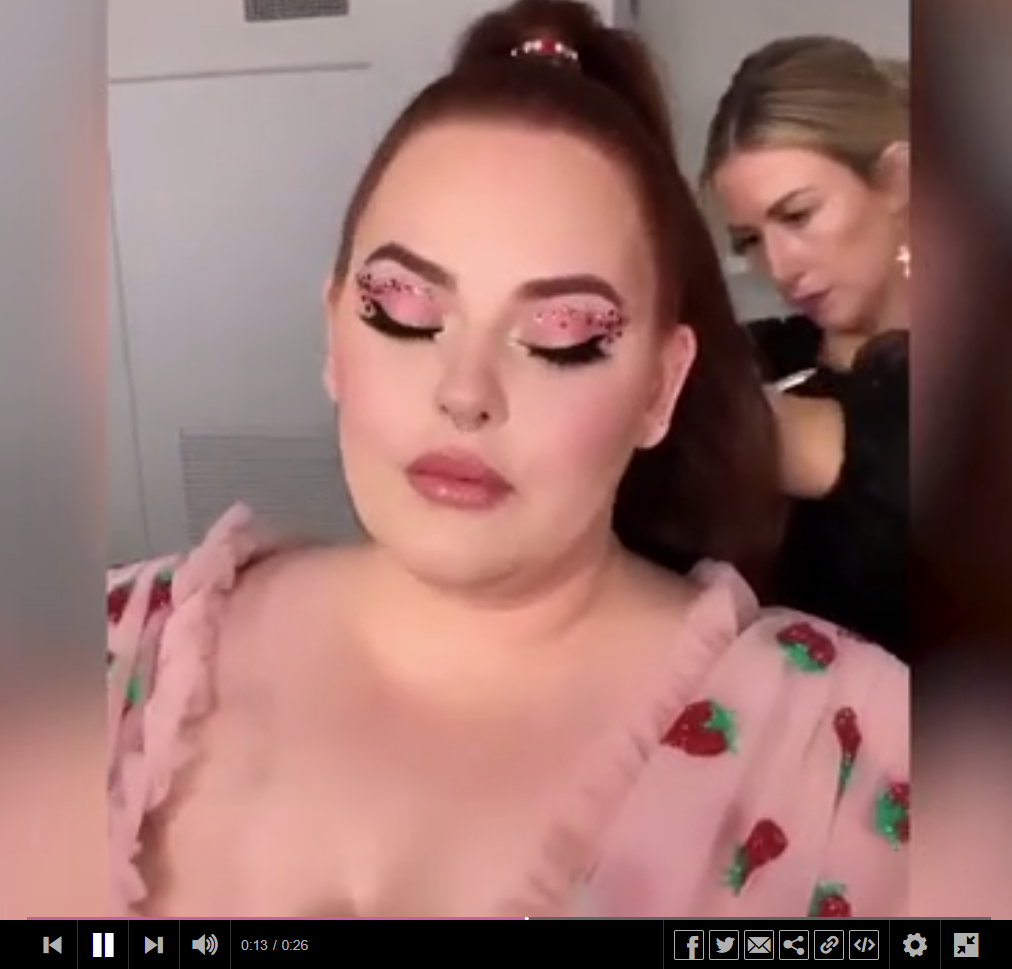 The standard formula for a lot of magazines is to put a highly attractive, smiling woman on the cover. Unfortunately, that formula has been so overdone that people can barely tell the highly attractive, smiling women apart. So, back in 2014, someone came up with the bright idea of putting a fat woman on the cover to get people talking again. The most prominent of those fat women was Tess Holliday and understandably, I suppose, she took it and ran with it. She was a “super-model” and an avatar of “body positivity” who absolutely rejected the idea that she needed to lose weight or that it was unhealthy to be fat… and she was very fat. You’re not talking about a woman who is overweight, but super curvy.  No, Tess Holliday is just a big, fat woman with a relatively pretty face. If you’re a guy, chances are, your head wouldn’t turn if you passed her on the street because she’s not attractive. (I hate to be this blunt about anyone’s looks, but if people are going to pretend Holliday is some amazingly attractive supermodel, someone has to interject some reality).

Well, she’s now 35 years old and although the weight never looked good on her, it’s looking even worse now. Which brings us to the Grammys. Holliday wore a dress there and… let’s just say it didn’t go well for her.

Tess Holliday has insisted that ‘society hates fat people’ after the $490 strawberry dress she was criticized for wearing to the Grammys went viral months later because ‘a bunch of skinny people wore it on TikTok.’

The 35-year-old plus-sized model dazzled in the whimsical pink tulle frock by designer Lirika Matoshi when she walked the red carpet in January, but she’s hardly gotten any credit for the popularity of the dress, which has taken over social media this summer.

Holliday shared photos and videos of herself wearing the look while calling out the double standard that plus-size people face. In her posts, she pointed out that she wore the now famous strawberry dress seven months ago — and was shamed for it.

…’I like how this dress had me on worst dressed lists when I wore it in January to the Grammys, but now bc a bunch of skinny ppl wore it on TikTok everyone cares,’ she wrote on Instagram and Twitter. ‘To sum it up: our society hates fat people, especially when we are winning.’

…Holliday shared a similar sentiment on Twitter, writing: ‘I’m aware some people said I looked nice in my Grammys dress and I never said I didn’t make best dressed lists as well as WORST dressed, but y’all are purposely ignoring the important part of my post: SOCIETY TREATS FAT PEOPLE LIKE WE ARE INVISIBLE.’

Her “fans” on Twitter generally seemed to agree with this insane sentiment as you can see: 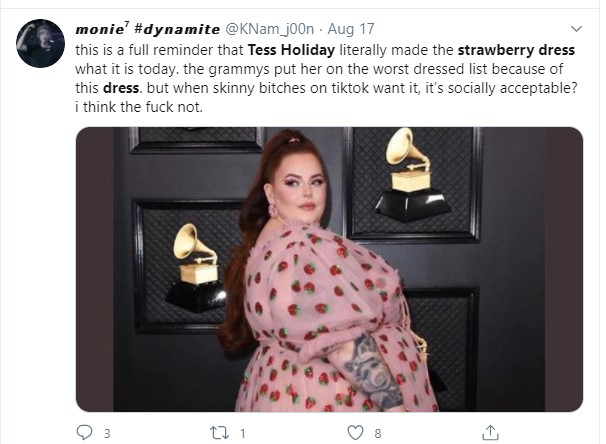 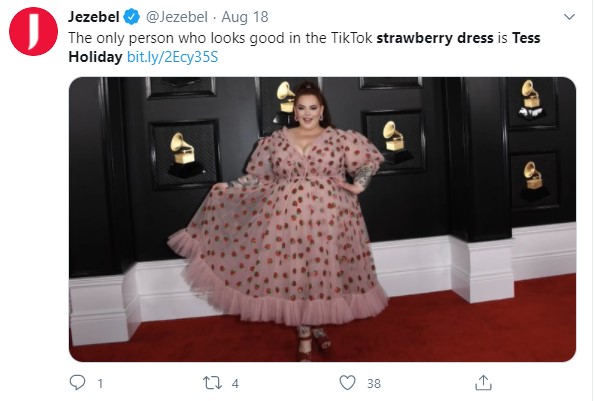 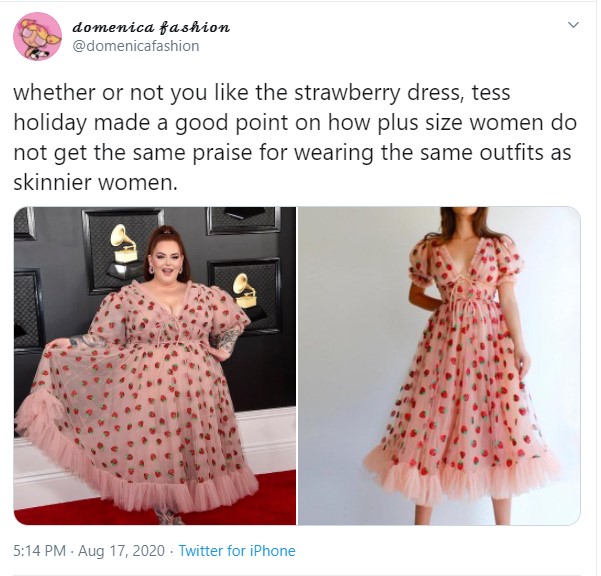 This reminds me of transsexuals that say they’re now “female” arguing that men have to be attracted to them or they’re transphobic… except that’s not how the world works. People like what they like and it’s not their job to change that, it’s your job to try to fit that mold… or not. But, what you can’t do, at least in a rational world, is demand that the whole world changes what they find attractive to suit you. It would be nice if you could. If guys could sit around with a big beer belly, crumbs in their beard, wearing a pair of Bahama shorts and Crocs while they collected their “best dressed” awards and had women lining up to give them backrubs before the orgy, it would be a beautiful world. However, it doesn’t work that way and a “2” like Tess Holliday doesn’t become a “10” because she yells “body positivity” enough times and weirdos that own magazines decide to push her insane views.

Do you want to do something nice for Tess Holliday? Don’t demand that she get a best-dressed award and convince her that she should lose some weight. It would probably add a few decades to her life if you could pull it off.