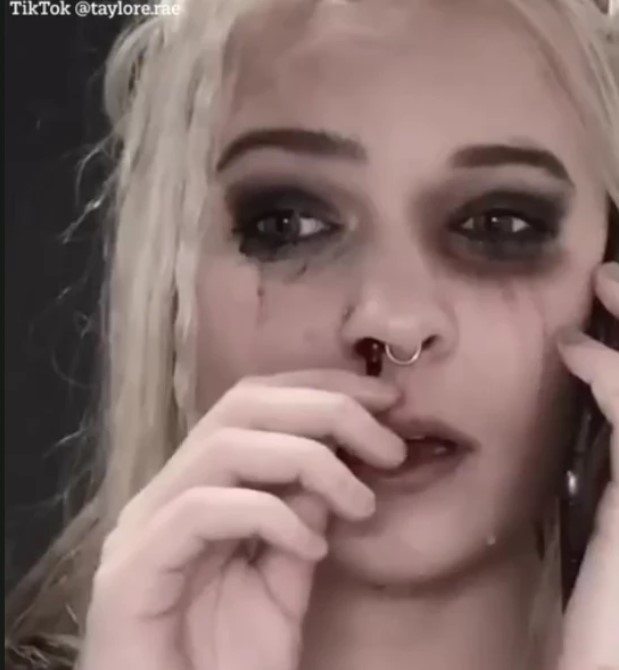 When attention becomes a form of currency, you may be surprised at the lengths that some people will go to get it.

Teen girls slathering their faces with makeup to look like they’ve been beaten have been warned they’re “romanticising abuse” and triggering real victims’ PTSD.

Some TikTok devotees claim that by pretending to be at the receiving end of violent incidents and domestic abuse they are helping to highlight the plight of real sufferers.

The Daily Dot reports that users have even been filming phoney attacks.

As recently as March 29, @taylore.rae showed herself as bruised, with smudged makeup, while bizarrely pretending to order a pizza.

In the ‘call’ she spoke of the so-called abuse.

And in another desperate attempt for attention, @cliocrowhurst posted a video where she pretended to have been shot by an “abusive boyfriend who got too drunk”.

One of the big problems with our culture is that things like “being entertained” and “achieving fame” have become more important to us than things like “becoming wise” or “being a good person.” Worse yet, it’s easier than ever to be a “star.” There are people on Instagram and YouTube that most of us, myself included, have never heard of — yet these people have huge fanbases and are making millions of dollars. On top of that, the world of social media has made everyone feel like they’re one tweet or video from going viral. That means “fame” feels like it’s within reach to people.

This whole dynamic has created this race to the bottom where everyone is trying to be more outrageous than other people to chase that clout. Over time, this leads to idiots licking toilet seats in a “Coronavirus challenge,” people faking hate crimes, women pretending to be abuse victims and perhaps worst of all, Logan Paul.

Why are these women faking being abused? Because it BENEFITS them. Not only are they getting those likes on their fake abuse videos, they’re also getting news articles written about them, including right here on Brass Pills. If let’s say 250,000 people hear about this dumb stunt and 225,000 of them think they’re idiots while 25,000 become fans, that’s a huge win for them. The hate will go away in a week or two, but the fans will probably be there long-term. Of course, then they have to keep those people happy, which will lead to their next outrageous stunt, etc, etc, etc, until our brains fall out of our heads.

At the end of the day, all I can tell you is that it’s okay to enjoy some dumb humor, but ultimately, if you allow yourself to become engrossed with the outrage circus instead of listening to wisdom, smart people and interesting takes on meaningful things, you’re going to make yourself and society stupider. Maybe even stupid enough to fake domestic abuse videos.