It’s hard to say with certainty whether Christine Blasey Ford has memory issues, mental problems, or is just a liar, but it is crystal clear that her allegations that she was sexually assaulted by Brett Kavanaugh aren’t true. So, when Sports Illustrated shoehorned her into announcing an award, it seemed really strange. 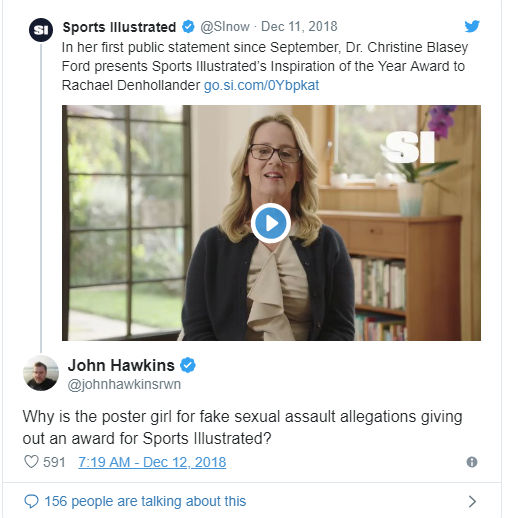 Crystal Mangum, the woman who falsely accused the Duke lacrosse team of rape, seems like a better fit here, but since she’s in prison, Ford may have been the next best option.

Of course, people get very angry when you point out the obvious fact that Ford made a false allegation. You get told, “This is why women who are sexually assaulted don’t come forward.” You should blame Ford for that. She’s the one who made a fake accusation during a high-profile Supreme Court confirmation hearing.

Others will say, “Ford is a victim! She’s a survivor.” However, in this case, the victim is Brett Kavanaugh. He was the one falsely accused of something he didn’t do in front of the world, which makes her the perpetrator.

“Oh, but she doesn’t have anything to gain!” Well, except for $850,000 in GoFundMe money that goes straight into her pocket, offers to do a book deal, Sports Illustrated holding her up to be some kind of hero, and what appeared to be a chance to prevent Republicans from gaining a Supreme Court seat. The motivation for her to lie was ENORMOUS.

So, let’s cut to the chase. Why should people not believe Ford’s story?

Well, she claimed that roughly 37 years ago at a party a drunken Brett Kavanaugh acted like a hardened sexual predator by turning the music up to hide her screams, covering her mouth, treating her so roughly she thought she might die, and trying to sexually assault her. Meanwhile, his friend Mark Judge looked on, laughed, and weirdly tried to pile on top of Kavanaugh multiple times as part of some goofy game that doesn’t fit very well with the Ted Bundy imitation that began her story. Eventually, she claimed Judge and Kavanaugh started scuffling, which allowed her to run off to the bathroom. Then she stormed out of the house without talking to anyone, including her best friend, and went home. She claims she told no one about it for decades, received no medical attention, and didn’t file a police report.

So, let’s start unpacking this.

We have to say “roughly” 37 years ago because Ford didn’t actually know what year the alleged assault supposedly occurred. At different points in time, Ford said it happened in the “mid 1980s,”  “early ’80s,” and 1982. Ford would have been 15 in 1982, but at another point she said it happened in her “late teens.” In other words, there’s no way of even pinning down the year this supposedly happened.

Additionally, Ford claimed it was a small party and she did remember who was there. She claimed Brett Kavanaugh and Mark Judge were in the room with her. As you’d expect, they denied it. However, she also claimed that their mutual friend, Patrick “PJ” Smyth, was there. He has denied being at any sort of party like that. Much more significantly, Ford said her lifelong friend Leland Keyser was there. Not only did Keyser deny that she was at a party like that, she says she had NEVER EVEN MET Brett Kavanaugh. When you claim something happened and YOUR OWN WITNESSES flat-out say it didn’t happen, that’s extremely powerful evidence that you are mistaken at best and lying at worst.

There are other holes in Ford’s story. For example, although she was all over the place, she finally seemed to settle on 1982 as the date. However, Brett Kavanaugh had a calendar noting where he was and what he was doing that summer and no party like the one she described was on there. Additionally, Ford would have been 15 that summer and although she didn’t know whose house the party was at, the area she described it happening in was a 20-minute drive from her home. So, how did she get there and more importantly, how did she get home? There were no cell phones back then and since she left the house without making a call, how did she get in touch with someone to drive her home? Who was it? For that matter, who threw the party? She has no idea. Not only is there no evidence that Brett Kavanaugh sexually assaulted Ford, but there’s also no evidence the mystery party she’s talking about ever happened at all.

Believing Ford is telling the truth isn’t even an act of faith because that would entail believing she was telling the truth without having the evidence to back it up. In Ford’s case, the evidence we do have contradicts her story. That’s why Maricopa County sex crimes prosecutor Rachel Mitchell, who questioned Ford during the hearings, rather famously said the case was even weaker than a “‘he said, she said’ case.” Ford’s own witnesses shoot down her story.

But wait, you say. Didn’t Ford talk about the incident with a therapist in 2012? Actually, Ford provided therapist’s notes that show she mentioned an incident like this to a therapist, but Kavanaugh’s name didn’t come up. Furthermore, Ford refused to provide the rest of her therapist’s notes, which was rather significant because there could have been a lot of exculpatory information in there for Kavanaugh. The therapist could have talked about giving Ford a type of therapy like hypnosis that can create false memories or she could have noted that Ford was delusional or prone to lying. Is that in there? Is it not? We don’t know because Ford never provided the notes to the Senate committee.

Then, there’s the famous FBI investigation that a few reluctant Republican senators spurred on. Brett Kavanaugh had already been through six FBI background checks that hadn’t turned up anything like this. The seventh check was limited because, quite frankly, Ford provided so little information that there wasn’t much for them to investigate. She had already testified under oath. So had Kavanaugh. Additionally, all of the supposed witnesses, including Mark Judge, had testified under penalty of perjury that no party like the one she described had happened. In the end, all the FBI really did was check out one particular date where Judge, Smyth, and Kavanaugh had been together, according to the Kavanaugh calendar. What else could the FBI have reasonably been expected to do? Ask Ford the same questions she had already been asked? Try to hunt down the people who lived in that area from Ford’s mid- to late-teens to ask them if they’d been to a particular party that may or may not have ever happened? Were they supposed to waste time talking to the people Ford talked to about Kavanaugh in 2018? What would that prove?

Last, but not least, it seems rather significant that Ford’s lawyers claimed she would have to drive to the hearings because of her intense fear of flying which, quite naturally, they blamed on the Brett Kavanaugh attack. Then, it was revealed that Ford flies all the time. She flew to Hawaii, French Polynesia, and Costa Rica. She flew out to see her family every year. So, if she was caught lying about that, doesn’t it seem entirely possible that she was lying about Brett Kavanaugh in order to make hundreds of thousands of dollars, become a hero of the Left, and potentially stop a Republican Supreme Court pick?

Like the Duke lacrosse team before him, Brett Kavanaugh was the victim of a woman falsely accusing him of sexual assault. If you want to help women who have really been victimized, holding up the poster child for false sexual assault charges as a victim is the wrong way to go about it.