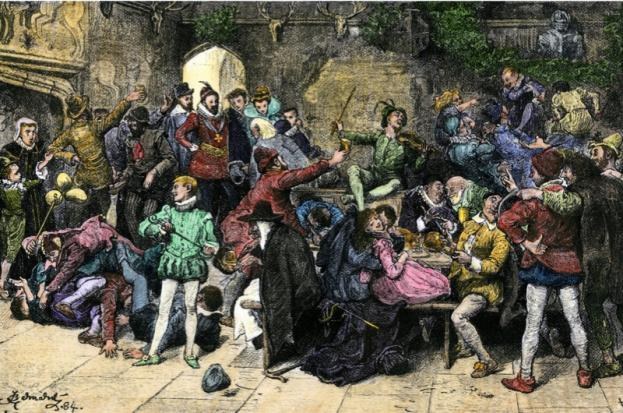 #7 Life Expectancy in the Middle Ages is NOT what you think!

So, let’s start with the mortality rate of babies in the Middle Ages. When we talk ‘life expectancy’ historians have always included infant mortality. Infant​​ mortality rate was somewhere between 30% and 50%. ​​ These figures include the high number of infants who died within days after birth from little-understood and wholly unpreventable illnesses that modern science has thankfully overcome. High infant mortality has created the myth of most eras having a lower life expectancy than us twentieth century people. The reality was that if a person lived to their 18th​​ birthday, they had a good chance of living​​ 60 more years from that point. 78 years is not a bad age to​​ live to.

#6 People had horrible table manners, throwing bones and scraps on the floor.

Sorry, even in the Middle Ages, members of polite society, from kings to villagers followed certain etiquette. No, they did not throw foot on the floor and eat like pigs. Their etiquette involved good table manners. In fact, depending on when and where and with whom you were eating, you might have to follow very strict procedures for eating and drinking. Here's a weird tip: If a lord passes you his cup at the dinner table, it's a sign of his favor. Accept it, backwash and all, and pass it back to him after you've had a sip.