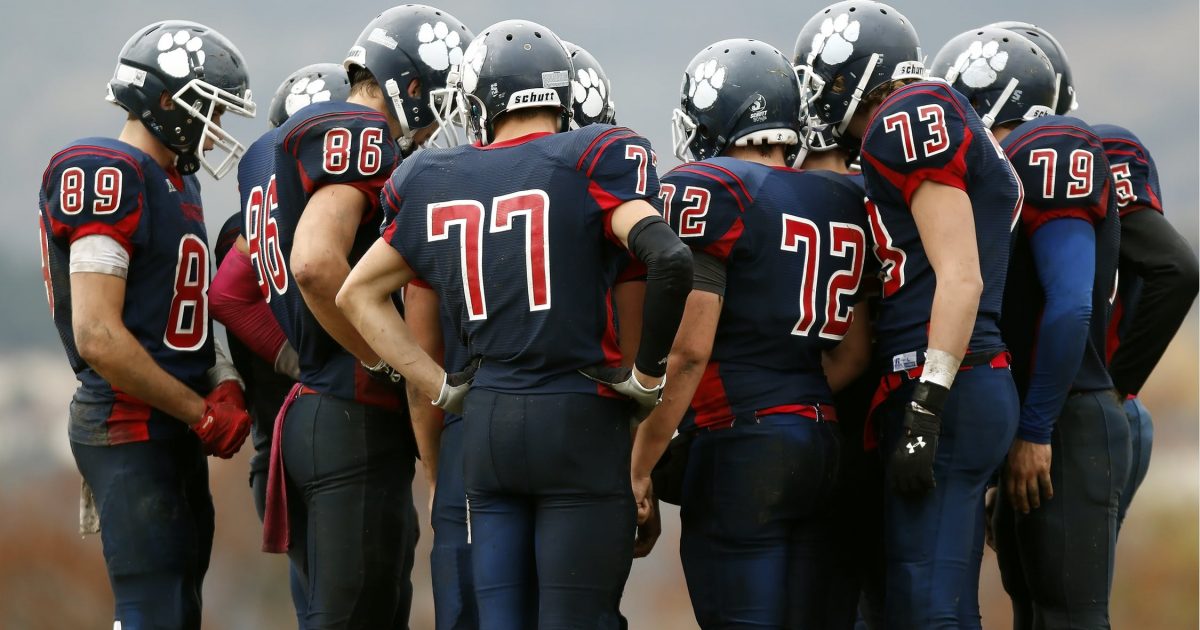 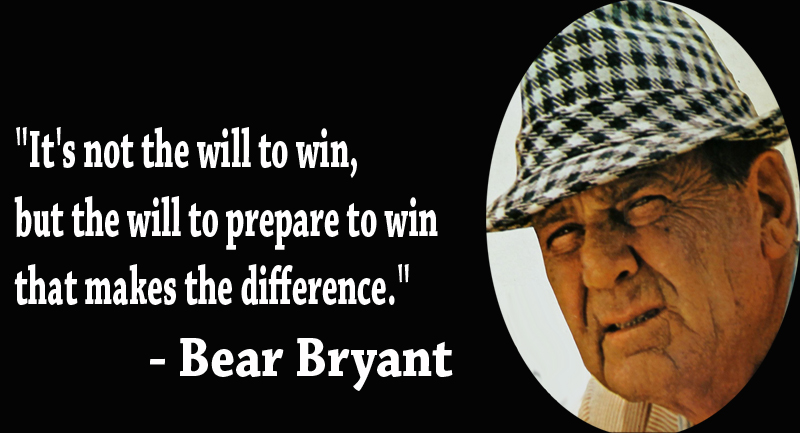 1) One of the most harmful myths spread by movies is that it’s the person who wants it more who finds a way to win when the chips are down. That’s actually very misleading. Heart might give you an edge versus an equally matched opponent, but preparation mows down heart 99 times out of 100. It’s not who wants it more in the moment; it’s wanting it bad enough to put in work day after day, week after week, and year after year until you make yourself into a formidable opponent. Don’t bet on heart; bet on the one who’s out there busting his behind to get better when there’s no cheering crowd to spur him on. 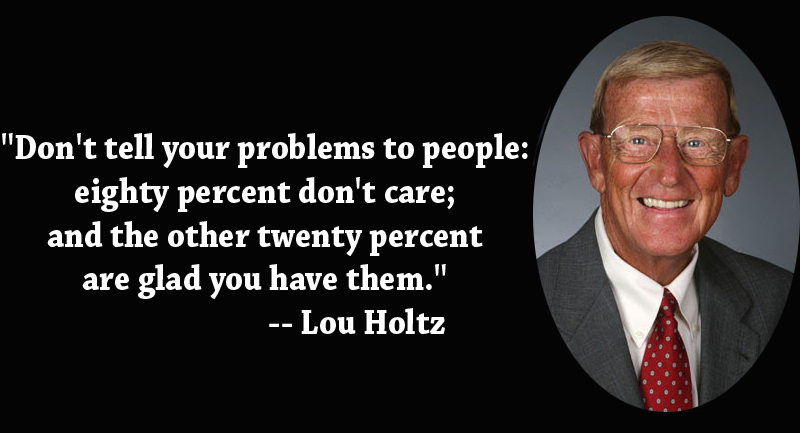 2) The poor guy wants to be rich. The married guy with an unhappy relationship wants to be single. The lonely single guy wants to be married. The fat guy wants to be thin. The sick guy wants to be well. The skinny-as-a-rail guy wants muscles. The bald guy wants hair. The mid-level manager who’s going nowhere wishes he owned his own business. The entrepreneur with the failing business wishes he had a corporate job. Long story short, you’re not the only special little flower out there with a problem. Moreover, people tend to care a lot more about their problems than your problems. So, if you’re looking for sympathy, understanding, or special treatment by telling people how bad you’ve got it, you’re probably going to be disappointed by the reaction you receive. 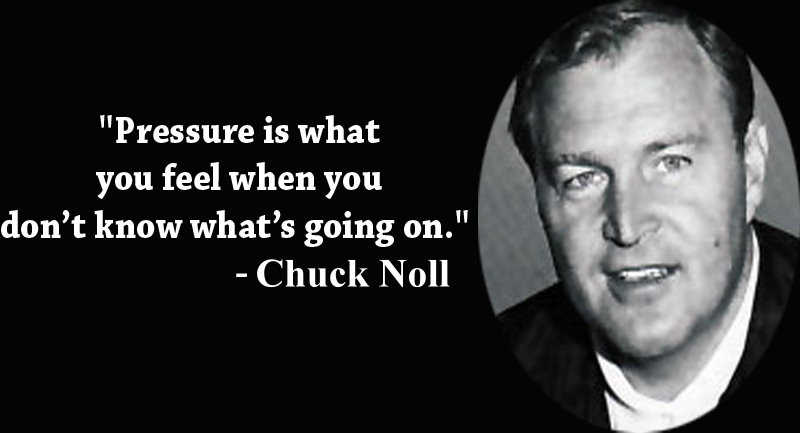 3) You get anxious when you’re unprepared, don’t know what you’re doing, don’t have enough time to get the job done, or are flying by the seat of your pants. On the other hand, even difficult and complicated tasks don’t make you nervous if you have experience, plan ahead, set aside the needed amount of time, and do your homework. Put another way, pressure is a message screamed from the recesses of your brain to your conscious mind. It’s telling you, “You are not ready!” Heeding that message early enough can be the difference between success and failure. 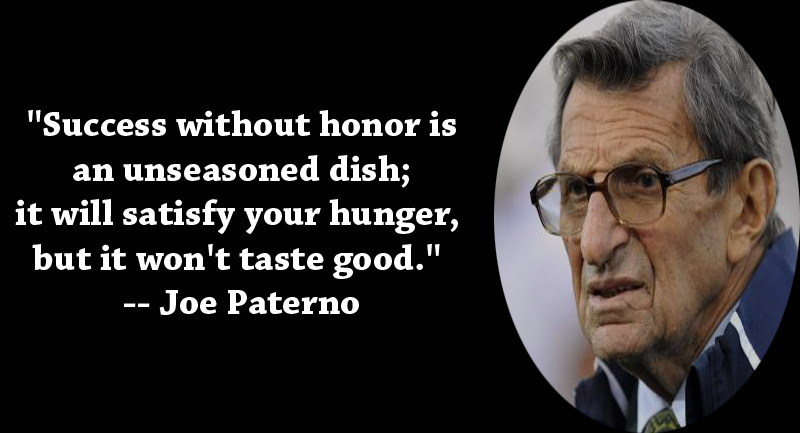 4) After the horrific Penn State child molestation scandal, many people will object to putting this quote from Paterno on the list. However, that’s actually why it needs to be here. He proved the worth of this quote with his own moral failure. Here’s an icon at Penn State, a man who was the winningest coach in Division 1 history and revered as one of the greatest football coaches of all time. Yet and still, because he turned a blind eye to one of his coaches who was abusing children, Penn State lost 111 wins and his statue at the university was removed. A man once regarded as a hero for decades died in disgrace. Despite all his success, Paterno could not make up for his lack of honor when it mattered. There’s a lesson there for all of us. 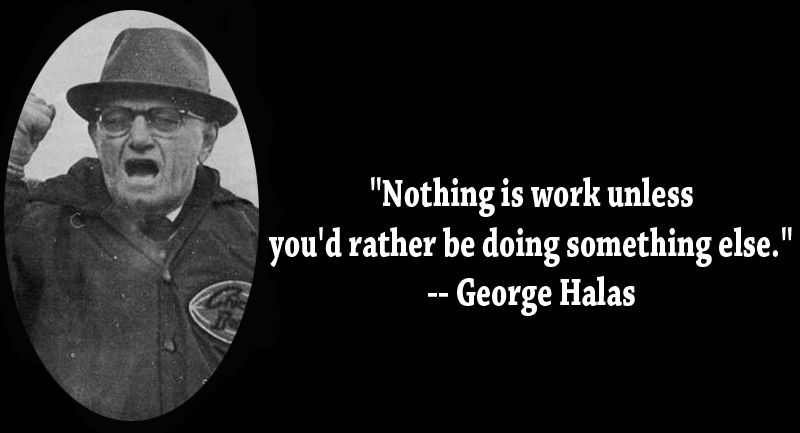 5) A few days ago, I learned that a friend of mine works in a comic book store. When I asked why she does that since I know she doesn’t need the money, she told me it relaxes her because she doesn’t really have to think very much. That’s the same reason I farm out everything from interview transcription to posting columns on my blog, but I don’t hire someone to cut my lawn: for some odd reason, I find it to be relaxing work. (And, no, I won’t come over to mow your yard next weekend!) The same philosophy should apply to your profession if you can swing it.

As the saying goes, “If you love what you do, you’ll never work a day in your life.” Almost all of us have to work for our daily bread and since that’s the case, you might as well find as many ways as possible to turn that work into a pleasure instead of a chore. 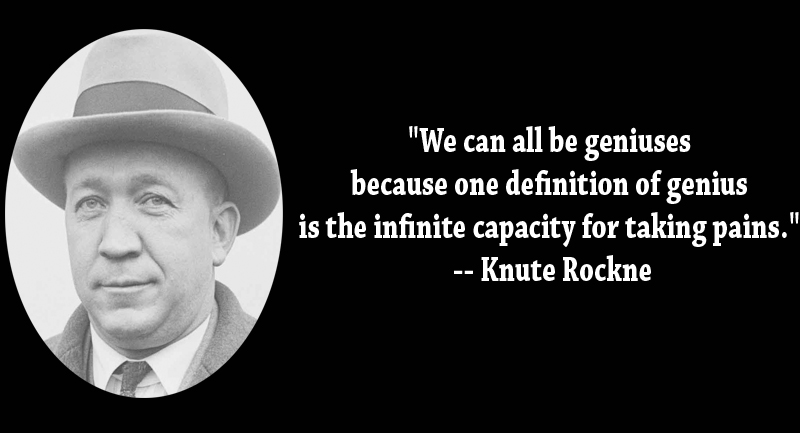 6) Many people believe that geniuses are born, not made. For the most part, this is simply untrue, even when you’re talking about athletes like Tiger Woods or child prodigies like Ludwig Van Beethoven. Both Woods and Beethoven, for example, were relentlessly trained from the time they started to walk by fathers who were talented in their areas of expertise. Most geniuses are better than everyone else at what they do because they consistently and persistently outwork and out-practice everyone else in their field. It’s not so much that they have gifts other people don’t have; it’s that they manage to find a way to utilize their potential to its fullest. So the question becomes: What do you love to do so much that you’ll happily struggle to improve at it for years at a time regardless of the difficulties you face in the process? 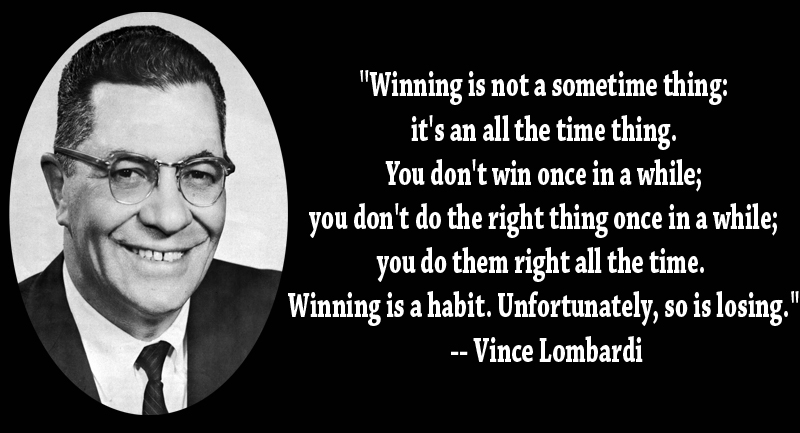 7) I actually have this quote on the wall of my office so that every time I sit down to work, it’s right there in my peripheral vision. That’s because this quote cuts to the essence of what separates champions from also-rans. A lot of people want credit for doing something right. But doing something right every once in a while isn’t impressive. After all, you’re supposed to do things right! In fact, the best of the best don’t do the right thing sometimes or three times out of five; they do it all the time, day in and day out until it’s so ingrained in their heads that they do it without even thinking about it.