Ad campaigns have always been designed around pushing the envelope to incite emotion that will drive the consumer to act (preferably to buy the product being advertised). In the past ads got a bit out of hand. With a mix of ignorance and misinformation and just being out of time, the following 10 ads would never be released today.

#10 The following ad is a straight-up misleading ad. 7-up in any of its forms is not wholesome and healthy to give to a baby. But advertisers push the envelope and misled the consumer that an 11-month-old baby would thrive on a sugary flavored drink. Today this ad would not stand for its pure dishonesty. #9 Okay, so maybe people didn’t know back then what we know now. The visual image of putting a baby in cellophane twists my stomach a bit. It’s strange to see such bizarre elements together that don’t belong, but maybe that was the purpose of this ad. This ad would not fly today because child advocate groups would do everything they could to hurt the company that paints pictures of babies in plastic bags. #8 This ad comes in the form of a TV commercial. It would never be shown on TV today because it promotes civil liberty in young boys that current culture finds disturbing. Here is an advertisement for a gun for boys. There’s nothing wrong with the ad other than the anti-gun sentiment is strong in the United States. You won’t see a Johnny Eagle Children’s Arsenal Toys because they just don’t exist anymore, because these kinds of toys are frowned upon and could ‘shoot your eye out’.

#7 This is an ad for men’s ties. I know it’s hard to know the product being sold because of the huge distracting image of a woman kneeling in worship to a man in a bed. Rosie O’Donnell would probably go into one of her famous rages seeing this picture. I personally don’t care for it, but I do understand the culture. This ad was put up in a time where men wanted women to worship them, it was their greatest fantasy. Telling men that buying your ties would put women on their knees must have had some draw because it was a successful ad tactic in its time. #6 Soooooooooo, alright I am cracking up over this ad. And if it ever showed up in any paper anywhere, that coffee company would have been laughed out of the coffee market. This ad wouldn’t show it’s face anywhere for so many reasons… it would cause riots and laughter that the world has never seen. A husband spanking wife openly for not-fresh coffee is a ludicrous idea today. Husbands get their own coffee – so freshness is on their own shoulders. 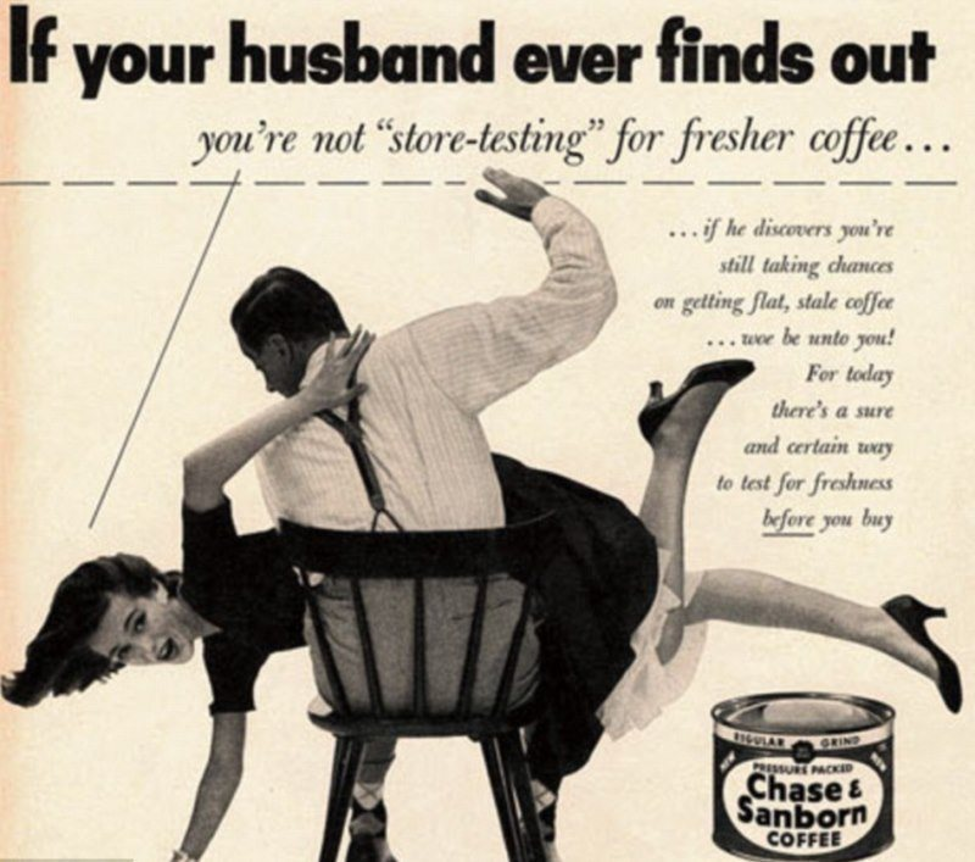 #5 This hilarious and bizarre ad for a tonic that will make you fat as a pig would not pass any marketing team. Other than being a highly disturbing visual of a baby head-pig body creature, it’s not a winning approach to encourage people to become fat like a pig. Today there is a product that helps people gain weight that doctors suggest called ensure — but the goal is never to look closely at this grotesque picture. I find it hard to understand how it made a product appealing in any time. #4 Spuds MacKenzie and Hamms Beer ads were popular in their time. But as regulations on alcohol and cigarettes increased, glorifying those products began to be banned. Spuds tried to keep up with these regulations and turned Bud Light ads into a “Know When to Say When” campaign teaching people to be wise when drinking. Eventually, alcohol ads have all but become extinct as a marketing tool to the consumer.

#3 Blow in her face and she’ll follow you anywhere. Oh, boy this ad is all kinds of wrong. Firstly, because cigarette smoking is frowned upon so much that ads are no longer a ‘thing’. Secondly, have you ever had someone blow cig smoke in your face? Super nasty, even if you do smoke. And last, she’ll follow you anywhere? Today it takes a lot more for a man to get a girl to follow him and no man with brains would fall for this dumb ad campaign. Cigarette companies also used movie stars to glamorize smoking. That was a pretty successful tactic until cigarette ads became banned from most markets. You won’t see ads like this ever again. #2 I have never seen a grosser ad before this ad or after this. I am shocked it was ever released because of the provocative nature of the ad. It is directed to teenagers as video games in that era were for kids. I guess ‘fapping’ wasn’t a huge issue back then as it is today. But this ad would never make it past the marketing team because of the nasty language and innuendos (if you could call it innuendo) inside the message and visuals. Just gross and may this never pass my vision again. 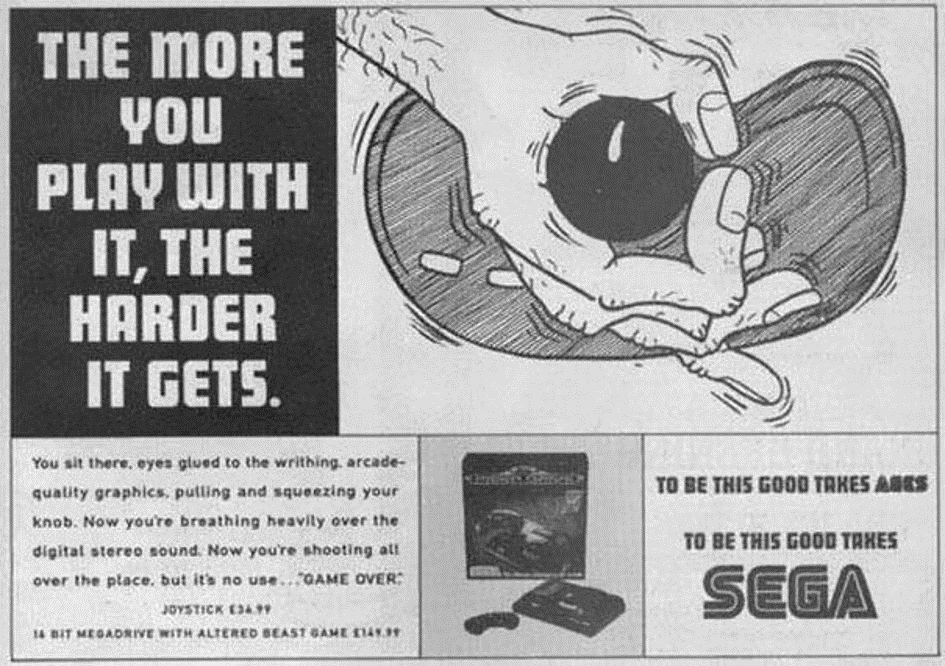 #1 Another vintage ad that you will never see again is ‘cocaine drops’. The simple reason is that cocaine is illegal and you can no longer use these drops to calm your crying baby. Sorry moms… you’ll have to find something else to spend your 15 cents on. Even though this product will never be advertised again you can probably check street corners for children building cabins with popsicle sticks like in the picture below and pick up some drops of your own, probably not.