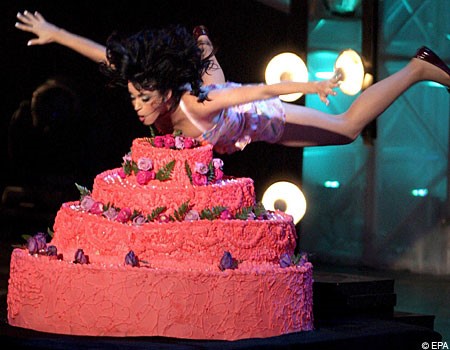 In what had to be the biggest flub in live tv,​​ host Steve Harvey announced that Miss Columbia had taken the crown. ​​ Moments later, Steve had to correct himself and say that Miss Philippines had won instead, leaving Miss Columbia devastated, and the rest of us cringing.​​

It's an old one, but the cringe lives on. ​​ When Ashlee Simpson was busted miming on SNL, she did an awkward jig and fled the stage, leaving her career in tatters.

Newly in love and trying to recover from a weird summer in which he insulted Brooke Sheilds for getting help for post-partum depression, Tom Cruise looked positively unhinged as he told Oprah how much he loved Katie Holmes. He amped up the crazy by jumping on Oprah's sofa while she – and the rest of us – looked on in horror.​​ ​​

At a 2005 concert performance, the Black Eyed Peas' Fergie was in a rush to take the stage​​ to sing "Let's Get It Started". ​​ At first the faux pas was dismissed as sweat, but in 2007 Fergie came clean and admitted she wet herself because there was no time to pee before the show.​​

At the​​ 2008​​ Latin Music Awards show, Katy Perry inexplicably​​ flopped​​ onto a giant cake. ​​ She hit it and then slid with maximum awkwardness onto the stage, leaving an utter mess all over the stage and herself. ​​ When she threw some of the cake at her musicians, it looked desperate and awful.

While giving an interview on the red carpet at the David Lynch Foundation's A Night Of Laughter and Song at the Kennedy Center, Kesha interrupted and asked for a hug. ​​ Jerry Seinfeld stepped back and said, "No thanks."  ​​​​

"No thanks," Seinfeld says again.

"Just a little one?"

Finally Kesha gives up and runs away, covering her face with her hands.  ​​​​ We were all just as embarrassed as she was at the awkward exchange.​​